Abdul Qadir, who passed away in September 2019, was a true revolutionary, reviving the art of wrist-spin when it had threatened to become extinct. In 2008, in a feature celebrating greats who were never Cricketers of the Year, Wisden explained his genius.

Pakistan had been playing Test cricket for 25 years before they produced a wrist-spinner who brought a touch of magic to the game. Until then Intikhab Alam had been the best, and a very good cricketer he was, capable of hitting the ball as hard as anyone of his time and of bowling the best sides out. But Abdul Qadir Khan, who was born in Lahore on September 15, 1955, was the first with a full bag of tricks.

His influence, not only in Pakistan but wherever he played, was stimulating and beneficial, though nothing about him, other than his capriciousness, was ever to be taken for granted. Except in India, where Bedi, Chandrasekhar, Prasanna and Venkataraghavan were still in power, speed was coming more and more to dominate cricket thinking as Abdul Qadir was growing up. The cult figures were Jeff Thomson and Dennis Lillee, while in the Caribbean the most formidable concentration of fast bowlers the world is ever likely to see was being put together. World Series Cricket, too, was made the more spectacular for the emphasis laid on pace and fury.

The reason for his never becoming a Cricketer of the Year owes something, but not everything, to English conditions

So when attention was suddenly drawn to an ebullient, highly strung, unconforming 22-year-old from the precincts of Lahore, bowling a potentially rich and sinuous medley of leg-breaks, googlies, flippers and gesticulations, it was altogether timely. Within a few days of watching the uneasy opening games of World Series Cricket in and around Melbourne late in 1977, I was in Lahore being beguiled by Qadir in the first of his 67 Test matches, against Mike Brearley’s England side. Both technically and temperamentally, English batsmen are at their most uncertain against good wrist-spin, so it was no surprise when, in the first innings of the next Test, at Hyderabad, England were dismissed for 191, Qadir taking six for 44.

The reason for his never becoming a Cricketer of the Year owes something, but not everything, to English conditions. Because of them, England themselves never have produced, and probably never will, a seriously and consistently good bowler of the Abdul Qadir/Shane Warne type. To come to acquire such a degree of controlled and varied spin needs pitches with readier bounce and a lot more sunshine than are to be found in England. “Tich” Freeman’s phenomenal success, bowling quite gentle leg-breaks and googlies for Kent (1,673 wickets in the course of six English seasons) came in a game which differed so much from today’s as to be but a distant cousin, albeit a much-loved one. 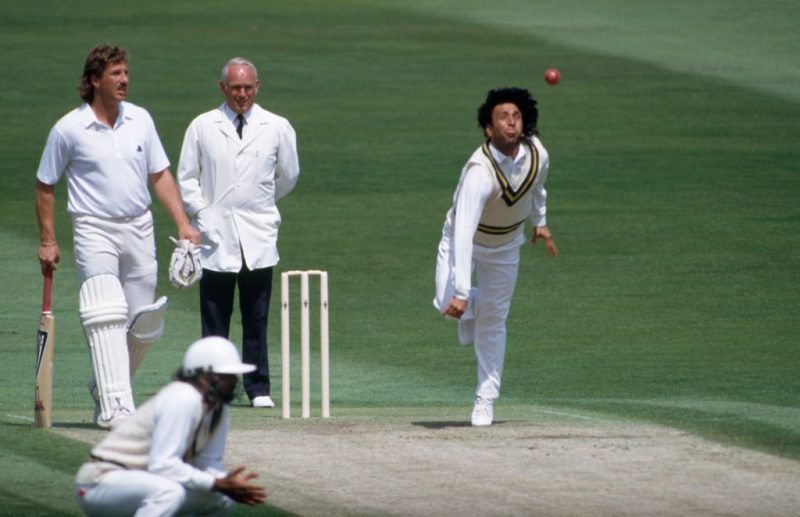 Qadir troubled batsmen with his variety of deliveries, including leg-spinners, googlies and flippers.

On the first of his three tours of England, which came within a few months of his success at Hyderabad, Qadir did no good at all. It was wretchedly wet. By the time of the second, in 1982, he was established in the Pakistan side and did pretty well. It would have been a lot better, he felt, but for the umpiring, a matter which became an issue more or less wherever he played.

On his last visit to England, in 1987, he missed the first 50 days on what might be called extended paternity leave, before taking ten wickets with some lovely bowling in the Fifth and last Test at The Oval. It was the only big occasion on which England really saw the best of him.

Unlike Warne, Qadir was always on the attack. He knew no other way. It was a great part of his attraction, as well as of his relative inconsistency

But in the pantheon of wrist-spinners he surely ranks near the very top. Facing him or Warne at their best must have been as severe a test of a batsman’s nerve and capacity as any slow bowler has ever represented. Those best qualified to make a comparison between the two stress, first of all, the extraordinary difference between Qadir’s bouncing, twirling, pumping run-up and Warne’s few measured and menacing strides – the marauder and the stalker. Bluff is, of course, the essence of their business, and here Warne is in a class of his own.

But unlike Warne, Qadir was always on the attack. He knew no other way. It was a great part of his attraction, as well as of his relative inconsistency. When it comes to deception, as in the way in which he disguised his googly and various leg-breaks, not to mention his flipper, he was a real little sorcerer.

And whereas he may not have had Warne’s occasional in-drift, perhaps with a leg-break on the end of it, in Pakistan he did bowl in front of umpires whose interpretation of the lbw law was not always conspicuous for its neutrality. But that is another matter, and should be allowed to take nothing away from Abdul Qadir’s rare, often dazzling skills.