On-field umpire Richard Illingworth’s call for an umpire review to check a Virat Kohli caught-behind decision led to considerable confusion on day one of the World Test Championship final.

The confusion arose when Illingworth referred to the third umpire to check for an edge, with UltraEdge being called into action despite the decision originally being sent upstairs to check whether the ball had carried.

The incident occurred off the final ball of the 41st over of India’s innings, when Kohli tried to nudge a Trent Boult delivery  down the leg side. Kohli’s bat appeared to have gathered a fine edge on the way to the wicketkeeper, and while Kane Williamson was seen contemplating whether to use a DRS review, there wasn’t any signal made within the 15-second window. Some speculated that the Blackcaps had taken a player review, but done so verbally, rather than by making a ‘T’ gesture as is mandated in the playing conditions.

Yeah. This is a good point. The way NZ were gathered was how the fielding side usually gathers after the review has been requested. The signal was probably not caught on TV, or was communicated verbally, or both.https://t.co/IUr1r710NX

Part of the confusion arose because it wasn’t clear if Illingworth had made an on-field decision himself, or given a soft signal. No soft signal was shown on the big screen or on the television coverage, and the commentators were unaware what decision had been made.

“This must be an umpire’s review for carrying,” said Nasser Hussain on air, “but I’d like for the umpire to actually make a decision first. We didn’t see a decision from the umpire, as to whether Kohli hit it or not.”

Photographs taken from the ground showed that Illingworth had given the soft signal ‘out’. 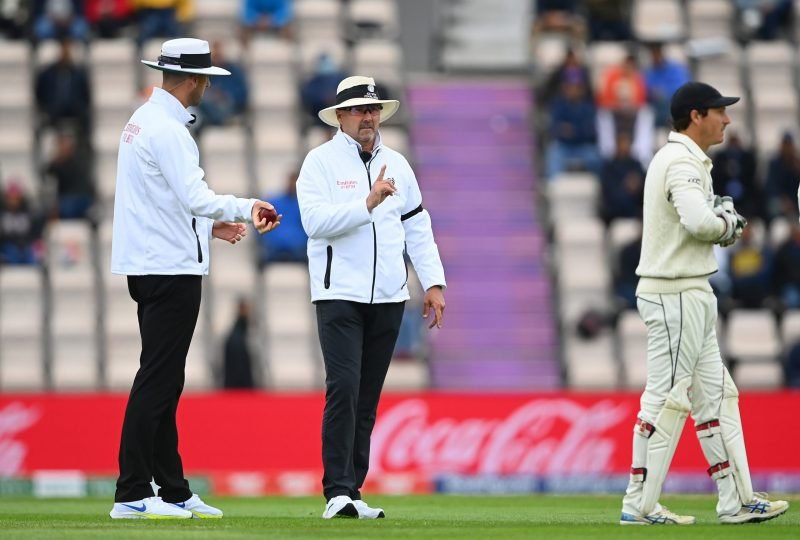 Umpire Richard Illingworth giving a soft signal of out

Third umpire Richard Kettleborough first checked the legitimacy of the catch via replays, and then, having decided the ball had carried, employed UltraEdge to confirm a flat line and no edge.

Kohli, meanwhile, was seen having a long chat with Illingworth, and was involved with discussions again with Kettleborough during the tea break. “That’s very odd out there,” Hussain continued, “and I agree with Virat Kohli asking exactly what happened there, because A, the umpire didn’t give him out, we didn’t see him give him out, B, it’s got to be for a clean catch if it’s an umpire review and that was a clean catch, C, he didn’t hit it.

“So what on earth was happening out there?”

While it’s common practice to use UltraEdge for a player review (and is explicitly mentioned under player reviews in the ICC’s playing conditions), there were immediate doubts whether the same can be used for an umpire review, which is called only to see if a catch is fair, and not to check whether the ball has been hit or not. However, clause 2.2.3 states that the third umpire should “check…whether the batsman has hit the ball”.

According to the ICC’s playing conditions for the WTC final, Appendix D (DRS), clause 1.2.2 states that the replays that can be used for DRS include “any replay, stump microphone audio or technology detailed in paragraph 3.8.1 below”, with paragraph 3.8.1 mentioning ‘UltraEdge’ as one of the technologies. However, clause 2.2.3 discusses the TV umpire examining the “television replay(s)”, with some suggesting this could be interpreted as being different to the potentially wider category of “replays”.

During the 2020 IPL, which uses the same playing conditions, an incident involving an umpire review utilised a different interpretation of the playing conditions, with the UltraEdge not being called into action at first specifically because it was the on-field umpire who had referred to the TV umpire. Only in a player review which followed the umpire review was UltraEdge used.

“It wasn’t an umpire’s review,” commentator Simon Doull later clarified during the WTC final broadcast. “Kane Williamson didn’t have to review, he doesn’t have to review when the umpires have decided they want to go upstairs to check something, and everything in the process is being checked. It was shown that Kohli did not edge the ball down the leg side, therefore given not out on umpire’s review. For all those who might have been a little bit confused as to how that worked.”