Next in our series, Scott Oliver picks out three star turns from a north-east powerhouse with an insatiable appetite for silverware.

For all the many sterling contributions of several others, the three granite pillars of South Northumberland’s remarkable decade as the top dogs of recreational cricket have been skipper/batsman John Graham, wily off-spinner Lee Crozier and barnstorming all-rounder Stephen Humble.

While teammates Chris Hewison, Adam Cragg, Richard Brook and Jonny Wightman each turned out in four national club finals, and Adam Heather and James Miller played in five, Graham, Crozier and Humble appeared in all six of the Gosforth-based outfit’s six national finals, of which five ended in victory. 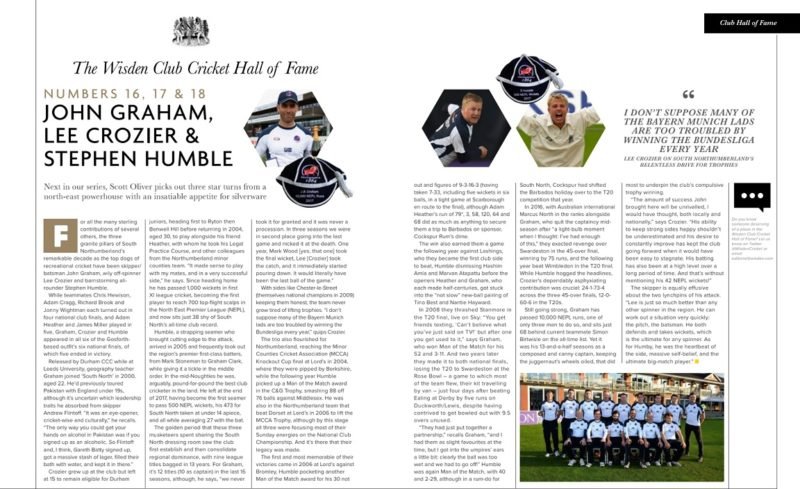 Released by Durham CCC while at Leeds University, geography teacher Graham joined ‘South North’ in 2000, aged 22. He’d previously toured Pakistan with England under 19s, although it’s uncertain which leadership traits he absorbed from skipper Andrew Flintoff. “It was an eye-opener,” he recalls. “The only way you could get alcohol in Pakistan was if you signed up as an alcoholic. So Flintoff and, I think, David Nash and David Sales signed up, got a massive stash of lager, filled their bath with water [to keep it cool], and kept it in there.”

In the mid-Noughties he was, arguably, pound-for-pound the best club cricketer in the land

Crozier grew up at the club but left at 15 to remain eligible for Durham juniors, heading first to Ryton then Benwell Hill before returning in 2004, aged 30, to play alongside his friend Adam Heather, with whom he took his Legal Practice Course, and other colleagues from the Northumberland minor counties team. “It made sense to play with my mates, and in a very successful side,” he says. Since heading home he has passed 1,000 wickets in first XI league cricket, becoming the first player to reach 700 top-flight scalps in the North East Premier League (NEPL), and is now 38 shy of South North’s all-time record. 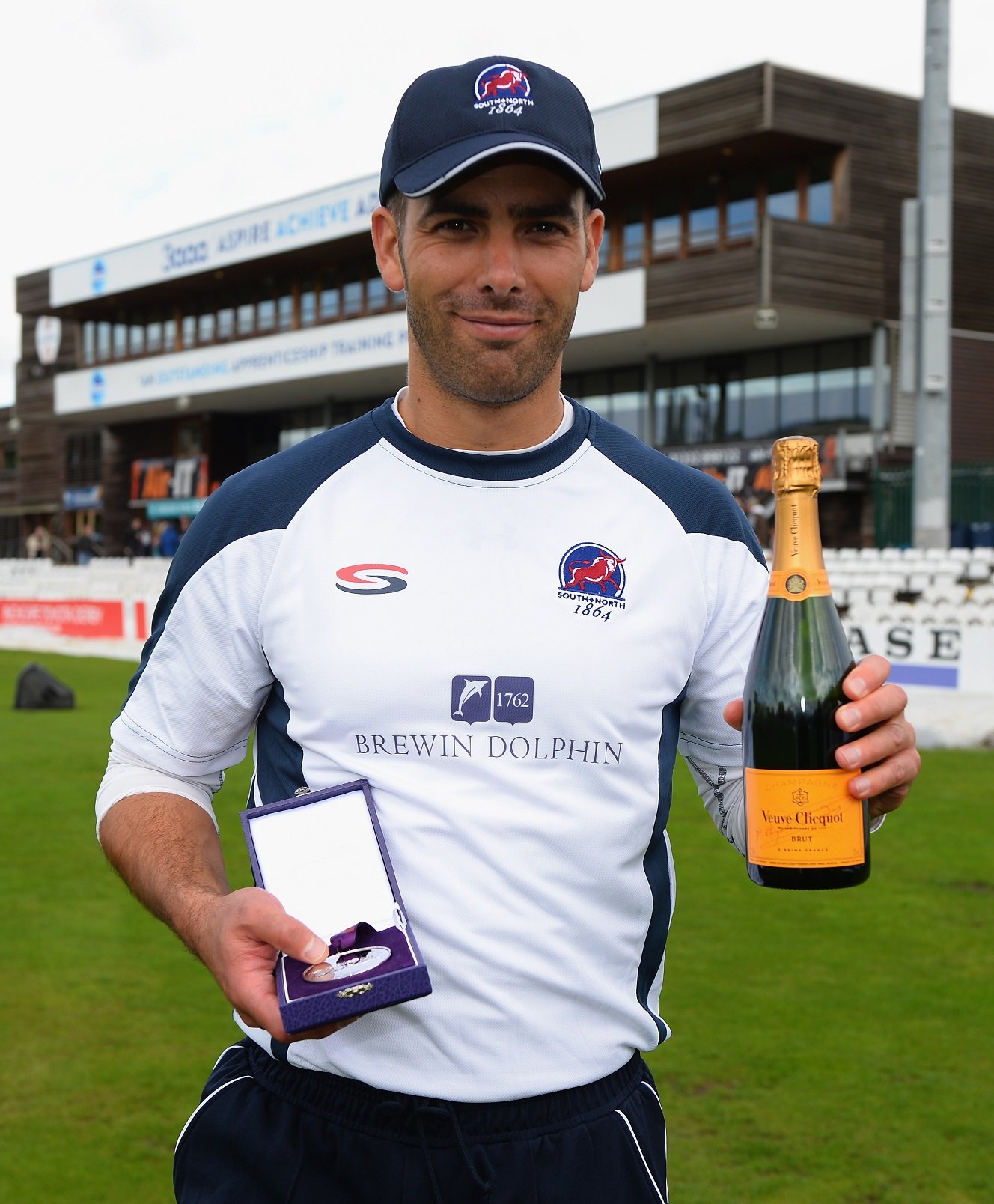 Humble, a strapping seamer who brought cutting edge to the attack, arrived in 2005 and frequently took out the region’s premier first-class batters, from Mark Stoneman to Graham Clark, while giving it a tickle in the middle order. In the mid-Noughties he was, arguably, pound-for-pound the best club cricketer in the land. He left at the end of 2017, having become the first seamer to pass 500 NEPL wickets, his 473 for South North taken at under 14 apiece, and all while averaging 27 with the bat.

The golden period that these three musketeers spent sharing the South North dressing room saw the club first establish and then consolidate regional dominance, with nine league titles bagged in 13 years. For Graham, it’s 12 titles (10 as captain) in the last 16 seasons, although, he says, “we never took it for granted and it was never a procession. In three seasons we were in second place going into the last game and nicked it at the death. One year, Mark Wood [yes, that one] took the final wicket, Lee [Crozier] took the catch, and it immediately started pouring down. It would literally have been the last ball of the game.” 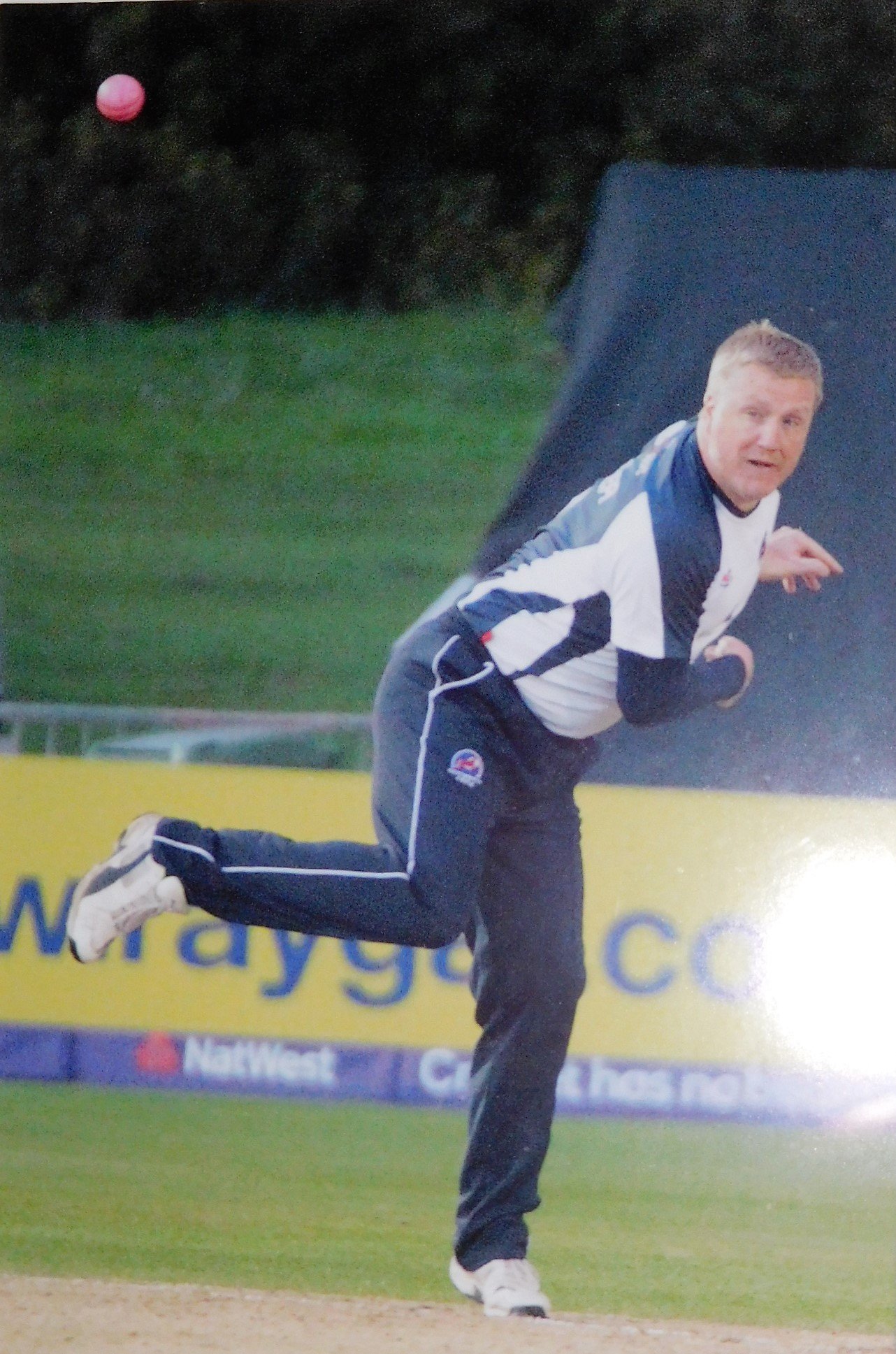 With sides like Chester-le-Street (themselves national champions in 2009) keeping them honest, the team never grew tired of lifting trophies. “I don’t suppose many of the Bayern Munich lads are too troubled by winning the Bundesliga every year,” quips Crozier.

The trio also flourished for Northumberland, reaching the Minor Counties Cricket Association (MCCA) Knockout Cup final at Lord’s in 2004, where they were pipped by Berkshire, while the following year Humble picked up a Man of the Match award in the C&G Trophy, smashing 88 off 76 balls against Middlesex. He was also in the Northumberland team that beat Dorset at Lord’s in 2006 to lift the MCCA Trophy, although by this stage all three were focusing most of their Sunday energies on the National Club Championship. And it’s there that their legacy was made.

The first and most memorable of their victories came in 2006 at Lord’s against Bromley, Humble pocketing another Man of the Match award for his 30 not out and figures of 9-3-16-3 (having taken 7-33, including five wickets in six balls, in a tight game at Scarborough en route to the final), although Adam Heather’s run of 79*, 3, 58, 120, 64 and 68 did as much as anything to secure them a trip to Barbados on sponsor Cockspur Rum’s dime.

“You get friends texting, ‘Can’t believe what you’ve just said on TV!’ but after one you get used to it”

The win also earned them a game the following year against Lashings, who they became the first club side to beat, Humble dismissing Hashim Amla and Marvan Atapattu before the openers Heather and Graham, who each made half-centuries, got stuck into the “not slow” new-ball pairing of Tino Best and Nantie Hayward.

In 2008 they thrashed Stanmore in the T20 final, live on Sky: “You get friends texting, ‘Can’t believe what you’ve just said on TV!’ but after one you get used to it,” says Graham, who won Man of the Match for his 52 and 3-11. And two years later they made it to both national finals, losing the T20 to Swardeston at the Rose Bowl – a game to which most of the team flew, their kit travelling by van – just four days after beating Ealing at Derby by five runs on Duckworth/Lewis, despite having contrived to get bowled out with 9.5 overs unused.

“They had just put together a partnership,” recalls Graham, “and I had them as slight favourites at the time, but I got into the umpires’ ears a little bit: clearly the ball was too wet and we had to go off!” Humble was again Man of the Match, with 40 and 2-29, although in a rum-do for South North, Cockspur had shifted the Barbados holiday over to the T20 competition that year. 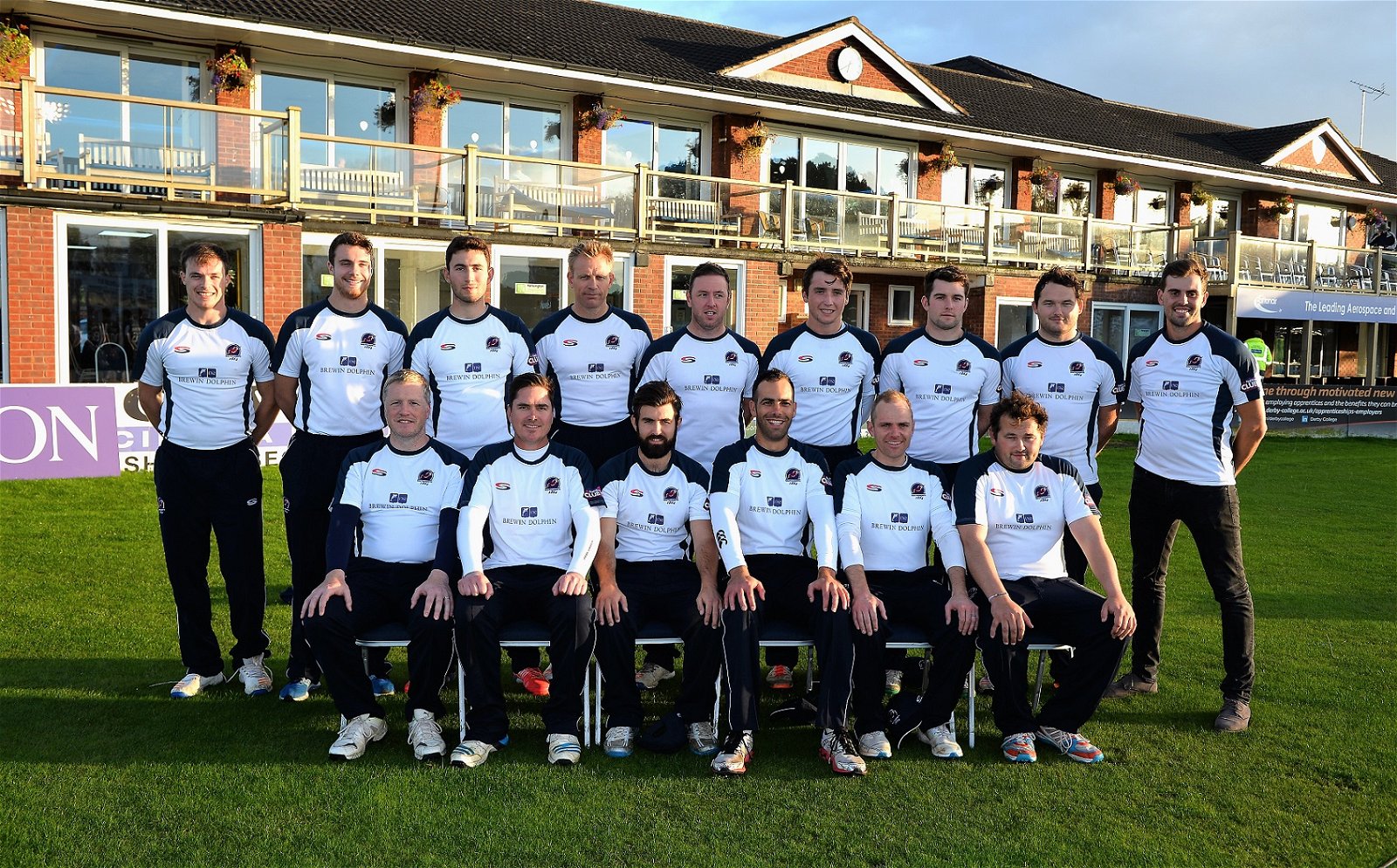 In 2016, with Australia international Marcus North in the ranks alongside Graham, who quit the captaincy mid-season after “a light-bulb moment when I thought: I’ve had enough of this”, they exacted revenge over Swardeston in the 45-over final, winning by 75 runs, and the following year beat Wimbledon in the T20 final. While Humble hogged the headlines, Crozier’s dependably asphyxiating contribution was crucial: 24-1-73-4 across the three 45-over finals, 12-0-60-6 in the T20s.

Still going strong, Graham has passed 10,000 NEPL runs, one of only three men to do so, and sits just 68 behind current teammate Simon Birtwisle on the all-time list. Yet it was his 13-and-a-half seasons as a composed and canny captain, keeping the juggernaut’s wheels oiled, that did most to underpin the club’s compulsive trophy winning. 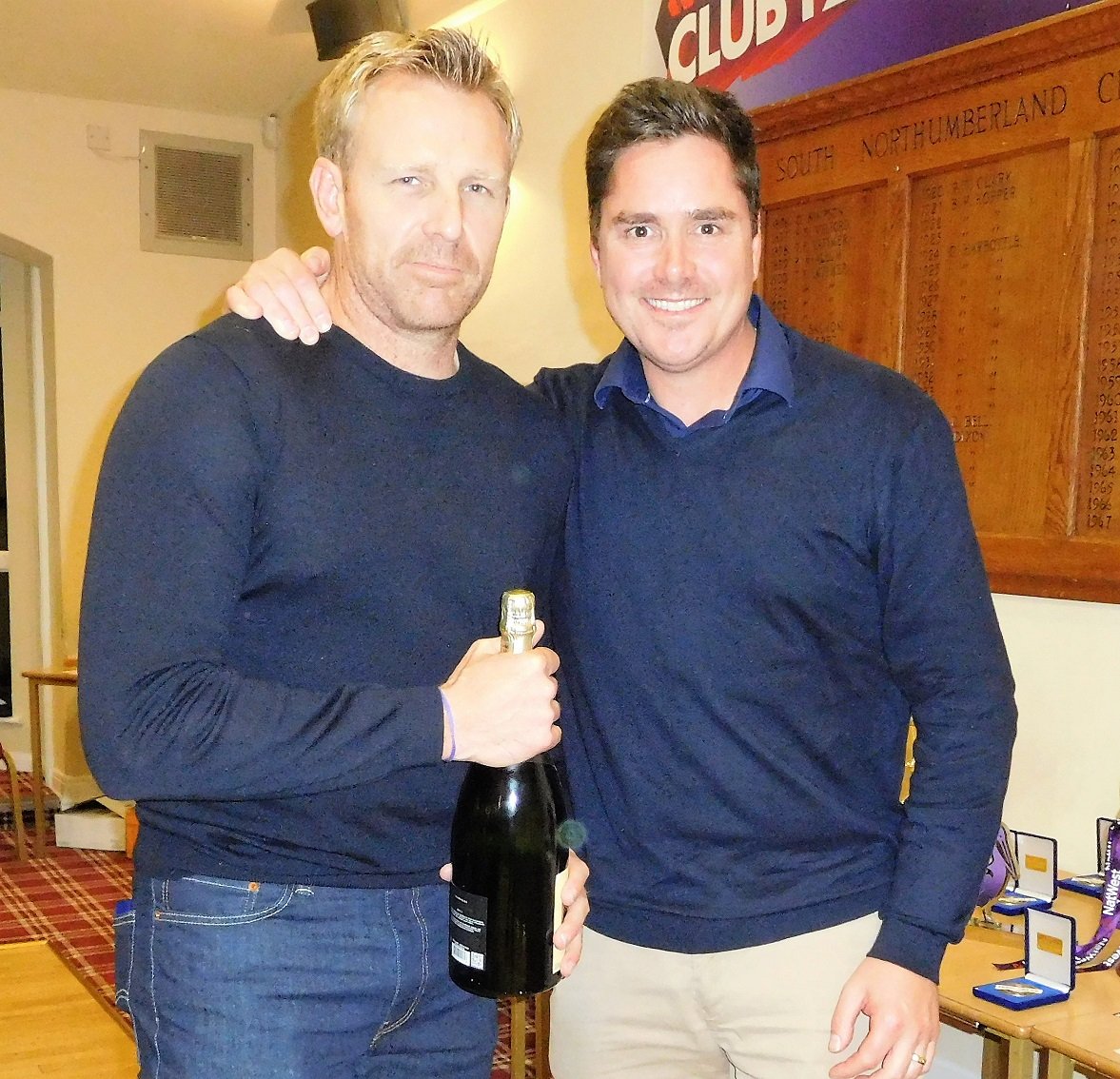 “The amount of success John brought here will be unrivalled, I would have thought, both locally and nationally,” says Crozier. “His ability to keep strong sides happy shouldn’t be underestimated and his desire to constantly improve has kept the club going forward when it would have been easy to stagnate. His batting has also been at a high level over a long period of time. And that’s without mentioning his 42 NEPL wickets!”

The skipper is equally effusive about the two lynchpins of his attack. “Lee is just so much better than any other spinner in the region. He can work out a situation very quickly: the pitch, the batsman. He both defends and takes wickets, which is the ultimate for any spinner. As for Humby, he was the heartbeat of the side, massive self-belief, and the ultimate big-match player.”

"I’ve found the last couple of days quite tough"