Sarah Taylor’s international retirement on Friday, September 27, marked the end of one of England cricket’s most significant careers.

A two-time World Cup-winner, a World T20 champion and a three-time Ashes winner, Taylor was a gifted wicket-keeper batter, who oozed talent and elegance on the field. She ends her career with 226 national appearances, in which she accumulated 6533 runs, including six ODI centuries.

That she won’t be adding to those numbers anymore despite being just 30 years old is down to her long struggles with anxiety that kept her out of the game for significant periods. Yet, despite her inner demons, Taylor remained a symbol of grace and excellence on and off the field.

Her exit leaves behind not only a huge void in the England team sheet, but also in their overall culture, which she helped shape massively through her grit and fight, and her unwillingness to let her personal battles get in the way of her pursuit of greatness.

Below, we look at five reasons why she will go down as one of the most influential contemporary cricketers.

This was a thing of beauty. One of the defining aspects of Taylor’s game. It was more than just swift glovework. This was a combination of top-notch anticipation, perfectly-timed movements, phenomenal sideways reach, and electric reflexes.

Maybe this is what strangled down the leg side truly means. Maybe we’ve been using that term in the wrong context all along. Or have we? This wasn’t so much strangling as it was a knockout punch. They all went something like this: bowler angles the ball in, batter follows the angle, ball glides past willow and the leg-stump. And then, bam! Batters were made to seem so slow that by the time they turned around, Taylor probably had enough time to rearrange the stumps, put up a tent around them, and stick her flag on top of them to mark her conquest.

Now it’s one thing to do this against a spinner. But Taylor was a master at pulling this off against seamers. Her balance was extraordinary, both in terms of how far she had to reach out to gather the ball, often with both hands, and then stretch full tilt the other way to break the stumps. It’s talents such as this that made her the most successful ‘keeper across formats in the women’s game, with a cumulative tally of 232 dismissals, and prompted Adam Gilchrist, the Thor Odinson of wicketkeepers, to call Taylor the “best wicketkeeper in the world – male or female”.

“I have always believed that the most feared wicketkeepers are the ones that don’t really say much,” Taylor told The Cricket Monthly earlier this year. “But they have a presence about them behind the stumps – you just know that they are just there.

“I want the batsman to know that if they leave the crease, they are gone. I’ve already got the ball in my hands, I’m taking their stumps and they’re just gone. I want them to have that in their brain even before I have caught the ball.”

It wasn’t just with the gloves that Taylor broke records. A fluent stroke-maker, especially through the off-side, where she had an imperious game, Taylor’s batting had a rhythmic overtone to it. It enabled her to become the youngest women’s cricketer to 1000 ODI runs, a feat she achieved in September 2008, exactly two years after her debut, at the age of 19.

She was also a part of a record England stand in the company of Tammy Beaumont during England’s successful 2017 World Cup campaign, tearing into a highly-heralded South African bowling attack in Bristol. Together, Taylor and Beaumont put on 275 runs – the highest in tournament history.

Her 147 in that match remains the highest score by a wicket-keeper in the World Cup, while her six tons as designated ‘keeper are by far the most – no one else has scored more than two in matches where they also kept wickets. She was also the owner of the highest score for a ‘keeper-batter in T20 internationals, which she achieved in 2013, and held the record for six years until it was broken by UAE’s Esha Rohit in January this year. She is also the only ‘keeper-batter – male or female – to have amassed over 2000 runs in T20Is.

A woman of firsts

Taylor’s penchant for being a trailblazer was established early in her career, when she broke into the Brighton College boys’ team, which had a significant footprint in the A league. Taylor’s team-mates there included future England internationals Holly Colvin and Laura Marsh.

It was one of her many forays into men’s cricket. Taylor subsequently became the first woman to ever play in the Darton first XI, and made her debut for a senior men’s cricket team after moving to Walmley cricket club, in Sutton Coldfield, whom she represented in the Birmingham and District Premier League. 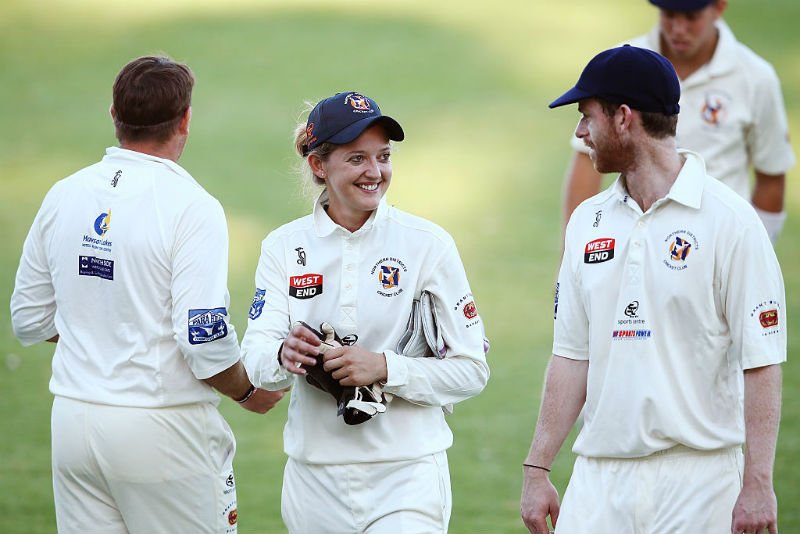 It was also the time when Mark Lane, the then England Women coach, was pushing for Taylor’s selection in Sussex’s second XI, putting her on the brink of a pathbreaking achievement in the women’s game. And though that never materialized, Taylor continued to carve out her niche by becoming the first woman to play Australian first grade cricket, when she made her debut for Northern Districts in the South Australian Premier Competition.

In a 2013 interview with The Guardian, Taylor said of her desire to play men’s cricket: “I would love to do it. It would be such a challenge – facing a bigger ball and bigger bowlers. But I’d have to look at myself after the second XI games and say: ‘Can you handle this?’

“I was almost offered a chance to play for the MCC boys against a county cricket first team – Sussex – in a Twenty20 game. But it would have to be in the longer form because the shorter game needs more power. So, yeah, you’ll have to keep an eye out and see how I go against the men.

“The plan is also for me to play some early-season games for the MCC boys. Mark is trying to get me a lot of men’s cricket, which can only help my game.”

Being the heartbeat of a champion team

Taylor played key role in each of England’s world title wins during her career. That included the epic double of the 50-over World Cup and World T20 title triumphs, within three months of each other, in 2009. She was also a part of three Ashes series wins. 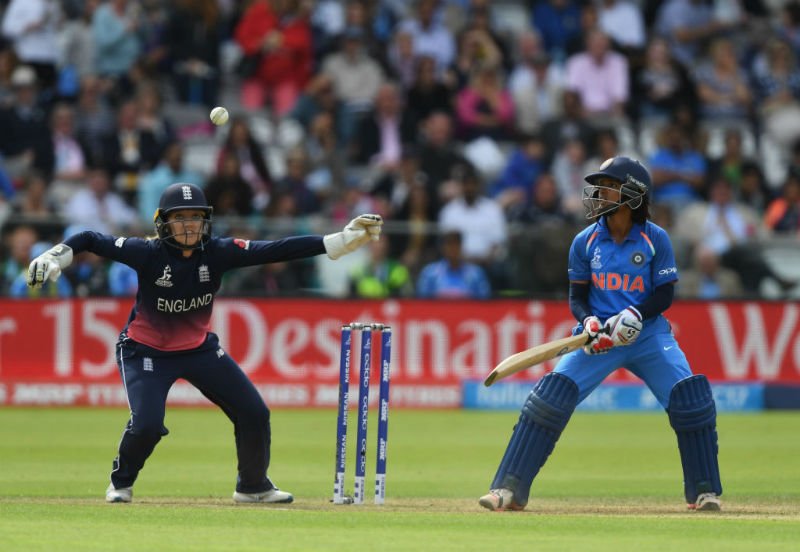 But her greatest impact came in the 2017 World Cup, which captured the imagination of the nation, and broke new ground with its reach and impact. Taylor’s contribution was 396 runs in nine innings, at an average of 49.50 and strike-rate of 99. That included an unbeaten 74 to boss a chase of 205 against Sri Lanka, that devastating 147 against South Africa, and vital contributions of 54 and 45 in extremely tight games in the semifinal and final.

However, stellar as those numbers were, the significance of Taylor’s contributions went beyond what she did on the field…

Though it eventually claimed her career, Taylor’s longstanding battles against anxiety and depression made for one of the most poignant and striking chapters in cricket. First hit by the troubles in the aftermath of the 2016 World T20 exit, Taylor, in the prime of her career, took an indefinite break from the game.

It was against this backdrop that she made her triumphant return at the 2017 World Cup, despite having been left out of a 24-member training camp in the United Arab Emirates, shortly before the tournament.

The comeback was short-lived, though, as less than a year after that epic triumph at Lord’s, Taylor was excluded from the India tour, following a recurrence of her anxiety issues. That marked the beginning of the end as she missed the World T20 later that year and also withdrew from the T20Is against Australia, in the last leg of the Women’s Ashes, which turned out to be her last tournament. 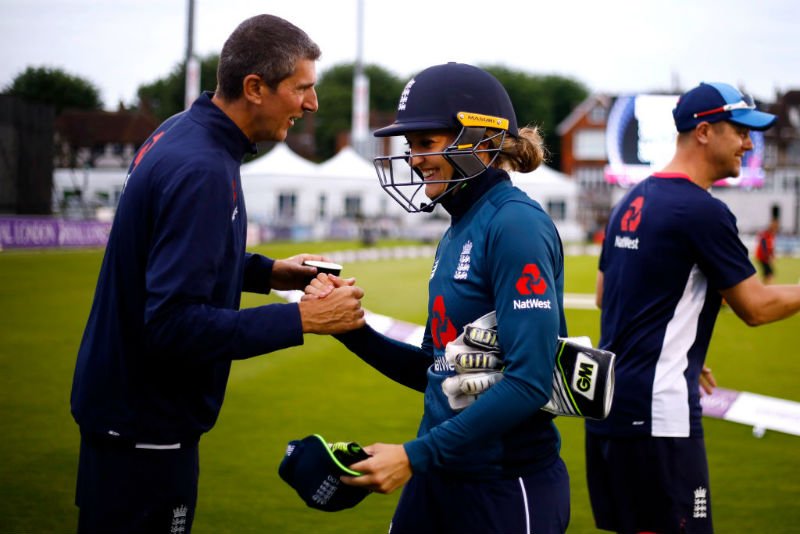 But, that she was able to withstand the toll that the final three years of her international career took was down in no small measure to the uplifting presence of the ECB and its support system, especially the former coach Mark Robinson.

That Taylor’s retirement came soon after Robinson’s exit, in the aftermath of the Ashes debacle, was perhaps coincidence at best and an unfortunate consequence at worst. Robinson had played an integral part in Taylor’s reintegration following her return and had lent a constant shoulder to lean on.

It was Robinson who first noticed when Taylor had begun to detach herself from the group. It was he who tried to take the pressure of expectations off her shoulders. He had been supportive of every move of Taylor’s, like when she decided to withdraw from part of the India tour to preserve herself.

Through this saga, Robinson, and by extension the ECB, set a gold standard for addressing mental health issues. It was an example of the inclusive nature that has governed England’s existence over the years, and the extent to which they would go to protect those that matter to them.

Taylor herself acknowledged as much when, shortly before the India tour, she said: “Mark Robinson has set the bar for dealing with players and individuals with mental health or any kind of life problems. He wants the best out of the players so if it helps them perform on the pitch, he will try as much as he possibly can. I don’t know about anyone else, so I can’t compare, but I’d like to think the ECB are leading in that. They’ve been unbelievably brilliant, I couldn’t have asked for more. They’ve backed me in every sense.”