On the Yorkshire Cricket: Covers Off podcast, Jonny Bairstow discussed the time he demolished a supposedly “unbreakable” helmet with his forehead after being dismissed for England.

The telling of the story came when Bairstow was discussing, with hosts Richard Pyrah and Steve Patterson, how he would react angrily to dimissals in his early days.

“When you were younger, you had some proper blow-ups in the dressing room when you got out,” said Pyrah, a former Yorkshire player and now a coach. “You were so driven to do well.”

“At Lancashire, I punched the wall,” replied Bairstow.

“What about, I can’t remember what game it was, but you had a new helmet, and when you came off you just punched your helmet to bits,” said Pyrah.

That incident, according to Bairstow, took place not while playing for Yorkshire, but on an England tour of India.

“The helmet, there’s one that Rooty will say about when we were away, in Kolkata, I think it was 2012,” said Bairstow. “You know the Ayrtek helmets? I’d got out, went to the dressing room, the Ayrtek helmets at that point were classed as ‘unbreakable’. They were the hardest helmets. I was sat in my chair and I just starting going ‘bang, bang, bang’, just started laying into my forehead with this helmet, to which this helmet just started disintegrating. And KP was like, ‘What are you doing? I’ve never seen someone do that ever’.”

While Bairstow suggests the tour was in 2012, pictoral evidence shows him batting in an Ayrtek helmet with the distinctive curved-peak design at Kolkata in a 2011 ODI between England and India, with pictures of him batting in later games showing him in a more traditional helmet with a flat peak. 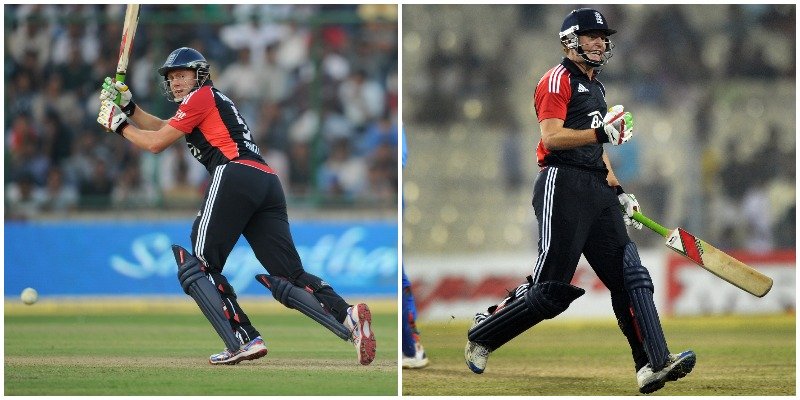 Bairstow batting in two different helmets on England’s 2011 tour of India, before and after the fifth ODI in Kolkata

Patterson, a right-arm seamer for Yorkshire, highlighted Bairstow’s proclivity for taken his anger out on his own bonce.

“To be fair you do like banging things against your head, don’t you?” he said. “There’s a couple of times I’ve seen you come off, you take your helmet off, and then you just whacked your head against your bat as hard as you can. There’s young lads in there who’ve never met you before, 12th manning and that, and they’re like ‘What’s Jonny doing?’”

Pyrah made sure to clarify that these were all incidents from a while ago. “Those times were about 10 years ago to be far, you’re a bit more chilled now,” he said.

Related Story: Ashwin: First heard of ‘hitting top of off’ when I was 25 years old
And Bairstow said his extreme reactions were down to the pressure he felt to succeed. “It’s one of those where you’re so driven and so passionate to do well, and you feel like you’re letting yourself down, like you’re letting your pals in the dressing room down, like you’re letting your family down,” he said. “And you’re striving to do so well for everybody that it’s so so important. It still is now, but you understand there’s different ways of managing things and maybe clocking your head against your helmet isn’t necessarily the best way.”