CricViz analyst Ben Jones takes an in-depth look at how Ben Stokes became one of the best batsmen in the world.

Ben Stokes’ all-round exploits are his defining feature. The guy you can’t keep out the game; batsman, bowler, bucket-hands. However, this can leave his batting itself a bit underappreciated – only now, when the question has become unavoidable, has the idea that he’s England’s best batsman been discussed.

Here is the story of Ben Stokes the Test batsman.

In terms of announcing yourself to the world, a ton in Australia is a good way to start. When Ben Stokes rocked up in Australia during arguably the best series by a fast bowler in Test history, and smashed a fourth-innings hundred on a cracked WACA surface, England knew they had a special player on their hands.

Stokes’ century at Perth was defined by aggressive shots – 31 of his runs came with pulls and hooks, 48 with drives – and by asserting himself on an Australian attack that was taking England apart. It summed up Stokes’ early career. His batting was defined by spikes of adrenaline, by moments of tightrope greatness.

Yet there was a concern that these spikes were defined too much by good fortune, because his defensive game was less than secure. In that initial phase, if you bowled a ball on a good length to Stokes, you averaged 19. He could dispatch full and short balls with ease, but he was doing it on less than solid foundations. 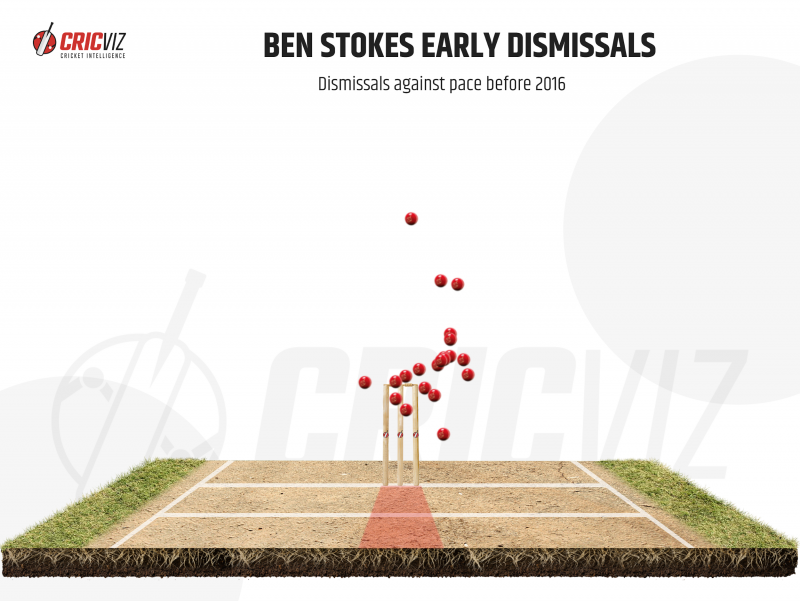 His attacking shots were edges or misses 25 per cent of the time; for top order players, anything over 18 per cent is concerning. Stokes was a talent, but a streaky one. There’s a reason a player as destructive as him averaged less than 30 in his first 20 Tests.

In his first summer, plenty of his innings were down at No.8; this was a young man clearly with enormous potential but, in 2014, Moeen Ali was England’s primary all-rounder. Stokes was used as a luxury.

The Lord’s century against New Zealand, the quickest ever on that ground, was the first moment when we began to see that Stokes was growing into an essential part of the side. 53 per cent of Stokes’ shots in that knock were attacking, the highest for any century at Lord’s since records began. Yet it also only included 13 per cent false shots – below the average for all Test cricket. This was enormous aggression, but with surprising control.

It was the innings that pointed to the next stage of his career.

More specifically, this second phase for Stokes was about developing his game against fast bowling. After that initial period of bedding in at the top level, Stokes became more assertive. Not more attacking, but more proactive.

Around 2017 – perhaps coincidentally, when Joe Root became Test captain – Stokes starts to come down the track against seamers regularly. While he’d always attacked, this was Stokes being proactive and disrupting the opposition lengths. He was beginning to take control – to this day, he averages over 100 coming down the track to seamers. This was a key part of the puzzle being put in its place. 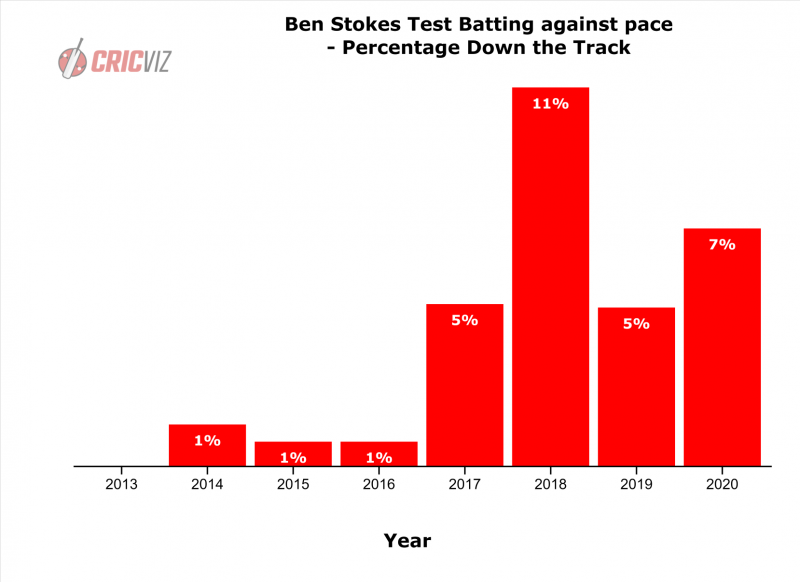 His average Impact Point with the bat became further down the track, an important step in his development. In that first phase, Stokes sat deep in his crease, perhaps getting used to the (literal) pace of international cricket. His average impact in that time was 1.6m from his stumps, but in this second phase it’s 1.9m. That change may only be 30cm, but it represents Stokes becoming more than just a back-foot player. In these years, he goes from averaging 35 on the front foot, to averaging 44. Stokes’ game was widening, broadening.

A lot of people in the England set-up say that, while the media focused on the more juicy redemption narrative of Stokes Post Bristol, the actual fire burning in Stokes was lit back in Kolkata. When Carlos Brathwaite launched Stokes for that fourth successive six, it was the end of Stokes, the junior player, and the first step on the journey to the Stokes we see today.

And yet, Bristol does seem to have had a material effect on his game. Stokes in 2018 attacked just 22 per cent of the deliveries he faced, the lowest for any year by a huge margin. He defended 37 per cent of his deliveries, the most for any year. There was a sense that Stokes, having caused his team so much trouble in the previous 12 months and having been unable to tour Australia, was eager to bat with greater responsibility, to demonstrate his commitment through dogged defence. In 2018, he was dismissed only once every 87 defensive shots he played, the highest figure he’d recorded since becoming a mainstay in the side.

Stokes went into 2019, and all that it would bring, with a rock solid defence against pace – five years into his career, he had built the foundations.

The most recent phase of Stokes’ career is defined by the World Cup final and Headingley, two performances of renown that dragged his team over the line. These were innings that closely resembled the adrenaline spikes of early Stokes, moments that stuck a hand out and grabbed the front pages, forced themselves into the mainstream. The difference now, and in these last 18 months, is that they are backed up by a base of consistency, and solidity.

Nobody has made more centuries than Stokes since the start of 2019. That is in part due to the volume of cricket that England have played in that time, but Stokes’ ratio of seven-innings-per-century is the same as Kane Williamson and Virat Kohli. 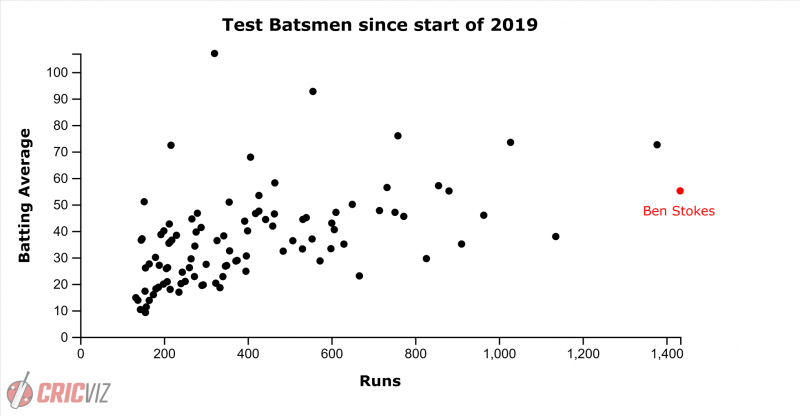 Stokes’ batting performance against spin is the obvious improvement. Before the last 18 months, Stokes averaged less than 30 against spinners, a clear weight on his rising power. Since then, whilst his average against pace and spin have both grown, the latter is huge.

Since the start of 2019, his false shot percentage against spin is 14 per cent, only marginally down from 15 per cent before then. He has been less attacking, going after 22 per cent of balls compared to 30 per cent before, but has maintained a run rate of about 3.3rpo. And yet that control has not come with a loss of explosiveness when he gets on the figurative front foot. Stokes’ attack has been immaculate against spin, averaging 101 with attacking strokes since the start of 2019.

There hasn’t been a clear and obvious technical or tactical change. He’s attacking with roughly the same frequency as before, ditto for sweeping, ditto, for coming down the track. The most obvious effect on his game is being more clinical in attack; something as simple as better shot selection could be the cause.

That vulnerability against good length bowling that limited Stokes’ performances has evaporated of late; in the last 18 months, his average against those balls has more than doubled. Getting that much better, against the very best deliveries in Test cricket, is the most important aspect of Stokes’ improvement. He has gone from being talented with the ability to take attacks apart, to a place where he can now he can soak up pressure as well.

The most likely cause of this is that Stokes has changed his stance at the crease this year. Post-Headingley, remarkably, he seems to have tried to improve further; now, as the fast bowlers run in, Stokes’ stance is very open. It gives him incredible access to the legside, and there have been a handful of clear consequences.

His batting against full and straight bowling has grown to be the best in the world right now. Since the start of 2019, Stokes has been LBW or bowled three times when facing seamers; the bowled dismissals were both drag-ons. His average against balls on his stumps, 95, is the highest in the world since the start of 2019. The new stance also seems to give him particularly clear access to midwicket. Last year, 28 per cent of Stokes’ runs against pace came in-front of square on the legside; this year, albeit over a small sample size, that figure has risen to 40 per cent, the highest for any year in his career.

Phase 4 – Infinity and beyond?

Who knows what comes next from Ben Stokes. Right now, the version we have is the most intense, most concentrated form we’ve seen, a cup of tea where you left the bag in, getting stronger with every sip. That can’t go on forever; but we also don’t know much is left in the mug.

Related Story: ‘He doesn’t need to make up shots’ – Hussain on the tweaks Stokes needs to improve
Stokes’ career has been a tale of highs and lows, of rises and falls. To expect that from here, it’ll be plain sailing, is foolish. But if the tale of his growth as a batsman tells us anything, it’s that Stokes’ greatest strength is ability to recover, to change, and to keep improving.

Ben Jones is an analyst at CricViz