The statistics that give a clue as to how T20 cricket’s constant progress is taking shape.

Occasionally, it can be tricky to see the wood for the trees in the IPL. With all the excitement and razzmatazz, good performances can become “outstanding”, and strong spells become “unplayable”. Yet this year, amidst all the glitz and the glamour, the batting performances have been matching the hype, this season of IPL standing as the most run-soaked in its history. The average run-rate of 8.22rpo is the highest ever, and currently 2018 is on track to be the first ever IPL season to breach the 8rpo mark. 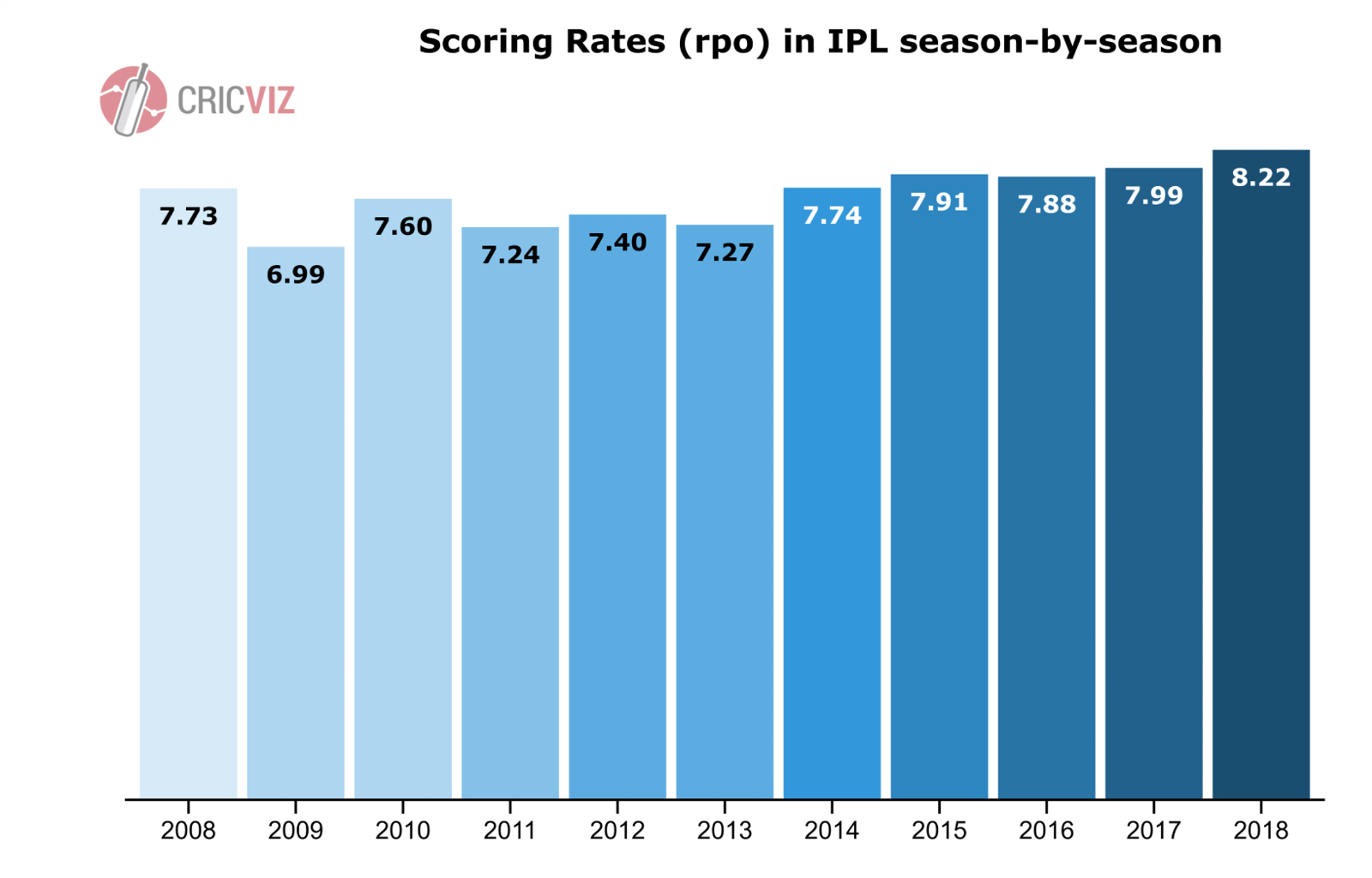 But why? With the very best of the world’s bowlers on display, why are batsmen doing better than ever? In the face of that kind of outlier, we’ve used CricViz data to try and establish quite why batsmen have been able to score at such consistently high rates.

On a basic level, the scoring rate has gone up because of an increase in the regularity of boundaries. Eighteen per cent of deliveries bowled this season have been hit for either four or six, an upturn which continues a general trend; only one year in the last seven have we seen the boundary percentage reduced from the previous season. 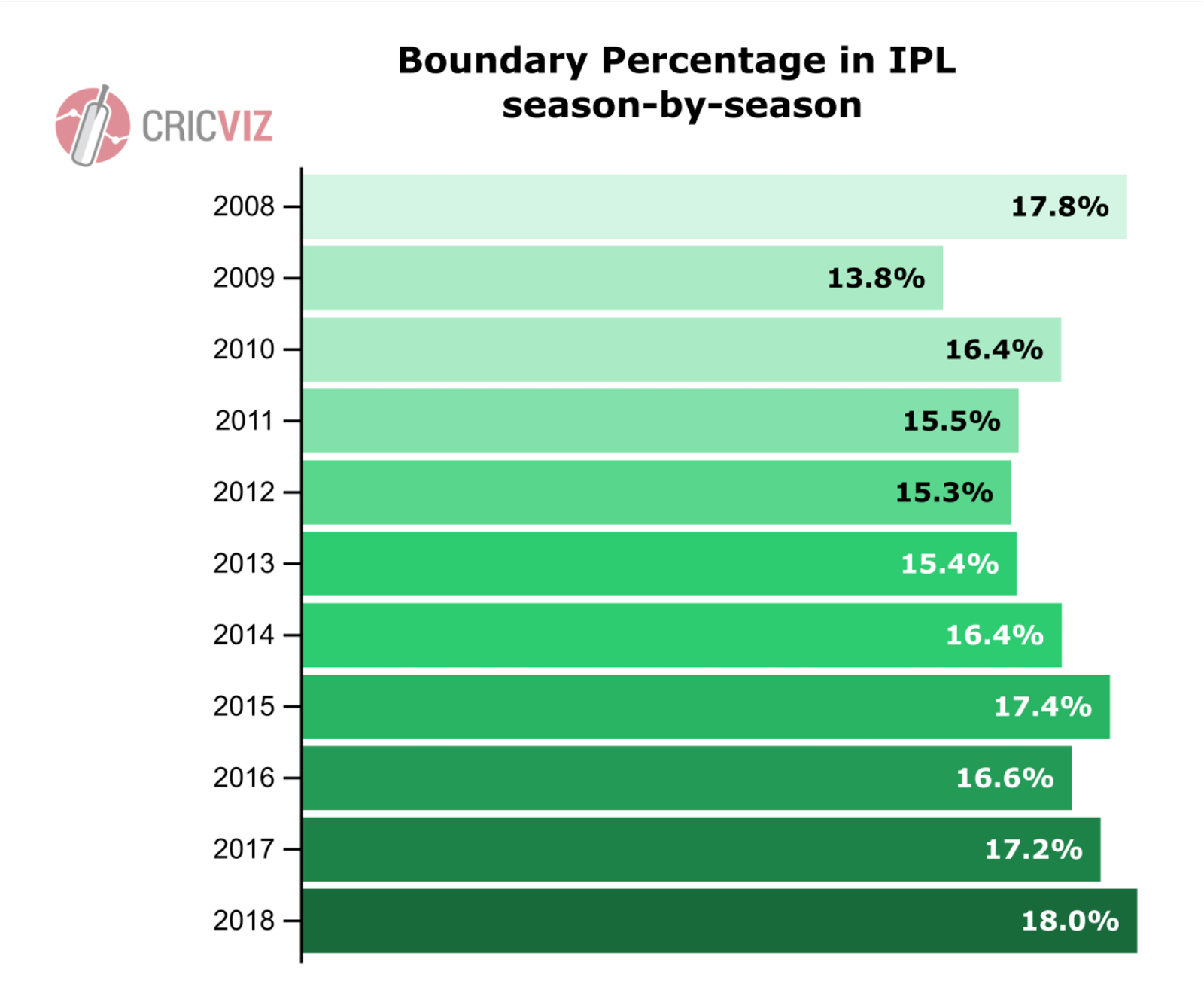 Interestingly, this upturn in boundary success hasn’t come from a more frenetic, aggressive approach from the batsmen in the middle. In fact, the increase in scoring rate doesn’t seem to correspond with any increase in attacking intent at all. As the graphic below shows, the percentage of strokes which aim to score a boundary have stayed broadly stable across the past few years. 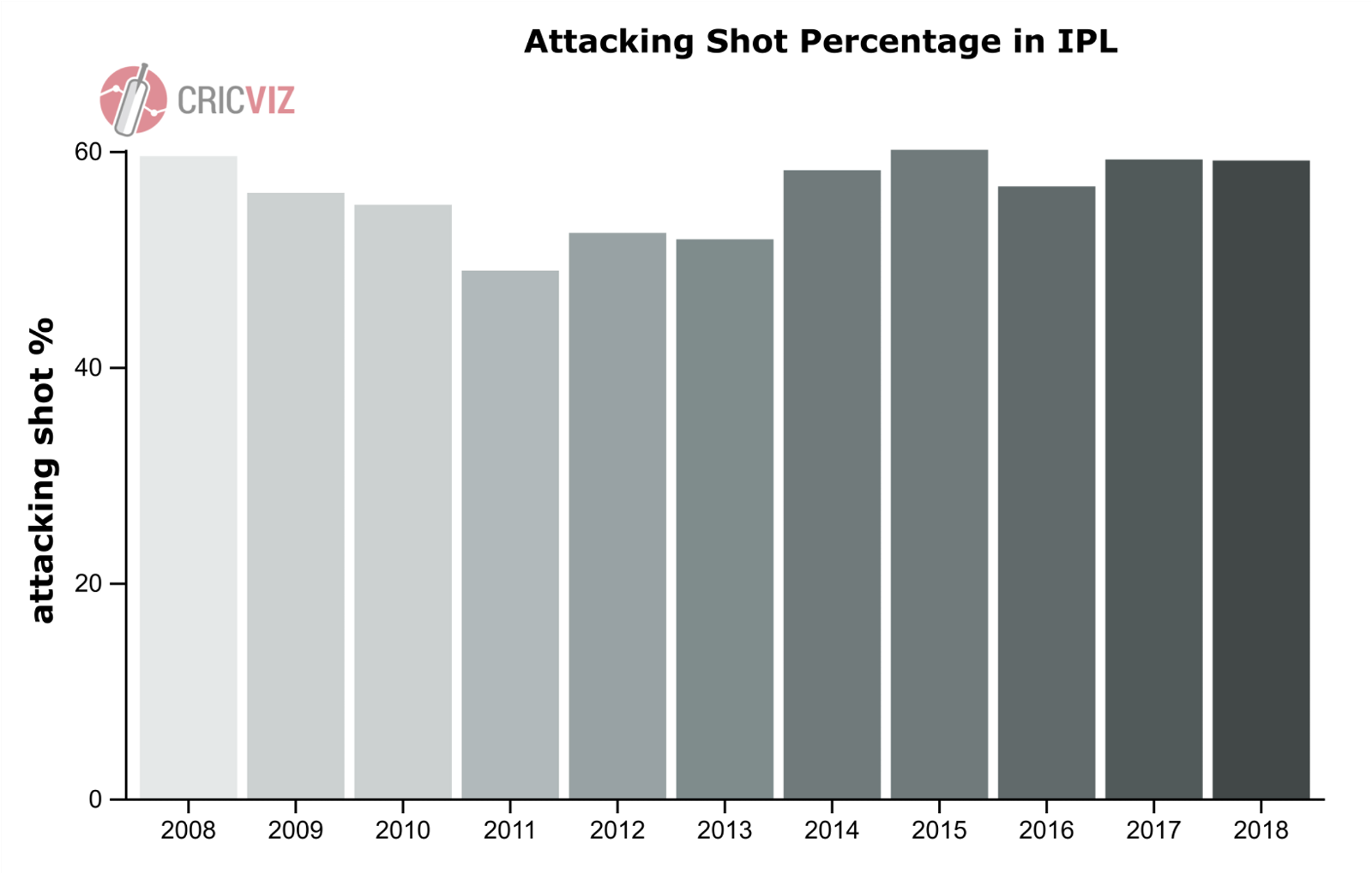 However, whilst the number of attacking shots hasn’t increased significantly, the effectiveness of those shots has certainly done so. Attacking strokes this season have scored at 10.93rpo, higher than any previous IPL season, and represent an almost 5 per cent improvement on last season’s figure. 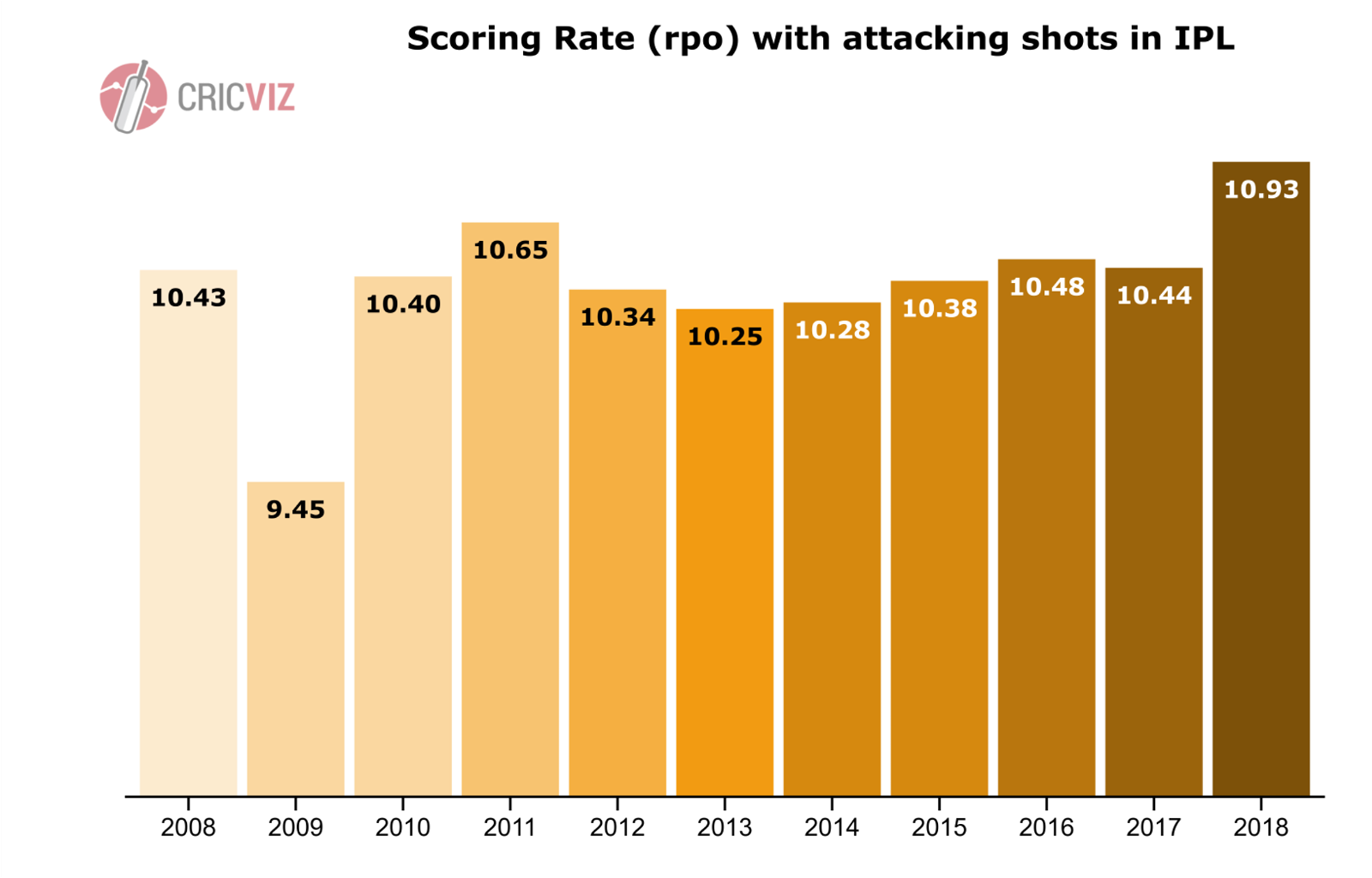 There are plenty of reasons for this no doubt – improved coaching methods and white-ball specialisation to begin with – and it’s reasonable to have anticipated this increase, but quite why this year in particular has seen such a substantial jump, it’s difficult to ascertain.

To the undoubted frustration of traditionalists, the skill of manipulating the field and rotating the strike is seemingly not the answer. The scoring rate for rotating shots has stayed broadly similar across the entirety of the IPL. This is expected – the nature of the stroke means the maximum yield of the stroke is significantly less, so variation is obviously going to be less – but it’s an interesting point for the future. As power-hitting reaches an ability ceiling, rotating may be the next best option for teams trying to improve their batting; developing a scoring rate consistently above 6rpo, as managed by 360 hitters like Glenn Maxwell, could be a significant opportunity for improvement. But for now, it’s not affecting the increase in run-rates. 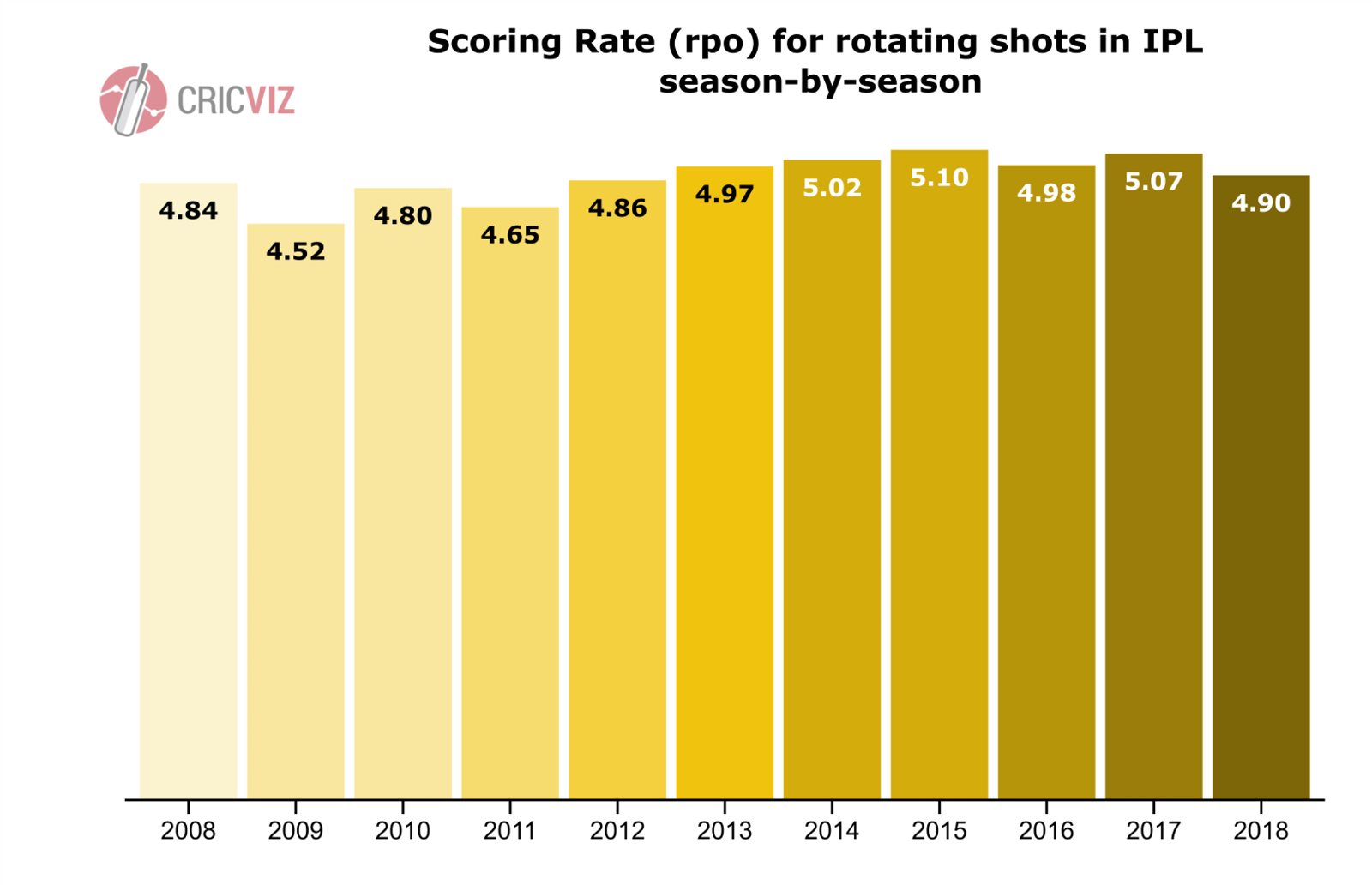 Equally, the increase in attacking effectiveness is not against both types of bowling. Pace bowling in this season’s IPL has an overall economy of 8.56rpo, meaning that it’s the most expensive it’s ever been in this competition. By contrast, spin bowling has an overall economy of just 7.73rpo in this IPL season, which is only the fourth highest economy for any season. Batsmen are also playing 19 per cent false shots this year against pace, fewer than ever before, their attacking suddenly more efficient and lower risk.

It’s interesting to note that these record levels of run-scoring aren’t present across the whole innings. The run-rate of 8.13rpo in the powerplay is the fastest in IPL history, and the run-rate of 7.66rpo in the middle overs is the fastest in IPL history. But the scoring rate at the death (9.18rpo) is only the fourth fastest in IPL history. Death bowling is in many ways the most glamorous element of T20 bowling, the one with the most clearly defined set of goals. An improvement in this area is concordant with the improvement in power-hitting, coaches and captains eager to limit batsmen in those most heated moments at the climax of the innings. But perhaps it neglects that an improvement in ball-striking increases run-rates across the whole innings, not just at the death.

Related Story: India’s batting is under scrutiny, but the bowling is to blame too

However, the most important element at play here may be a change which many have been forecasting – a re-evaluation of the value of a wicket. Despite the fact that run-rates are at an all-time high, suggesting batting ability is soaring, wickets are also being lost more regularly than in any previous season. 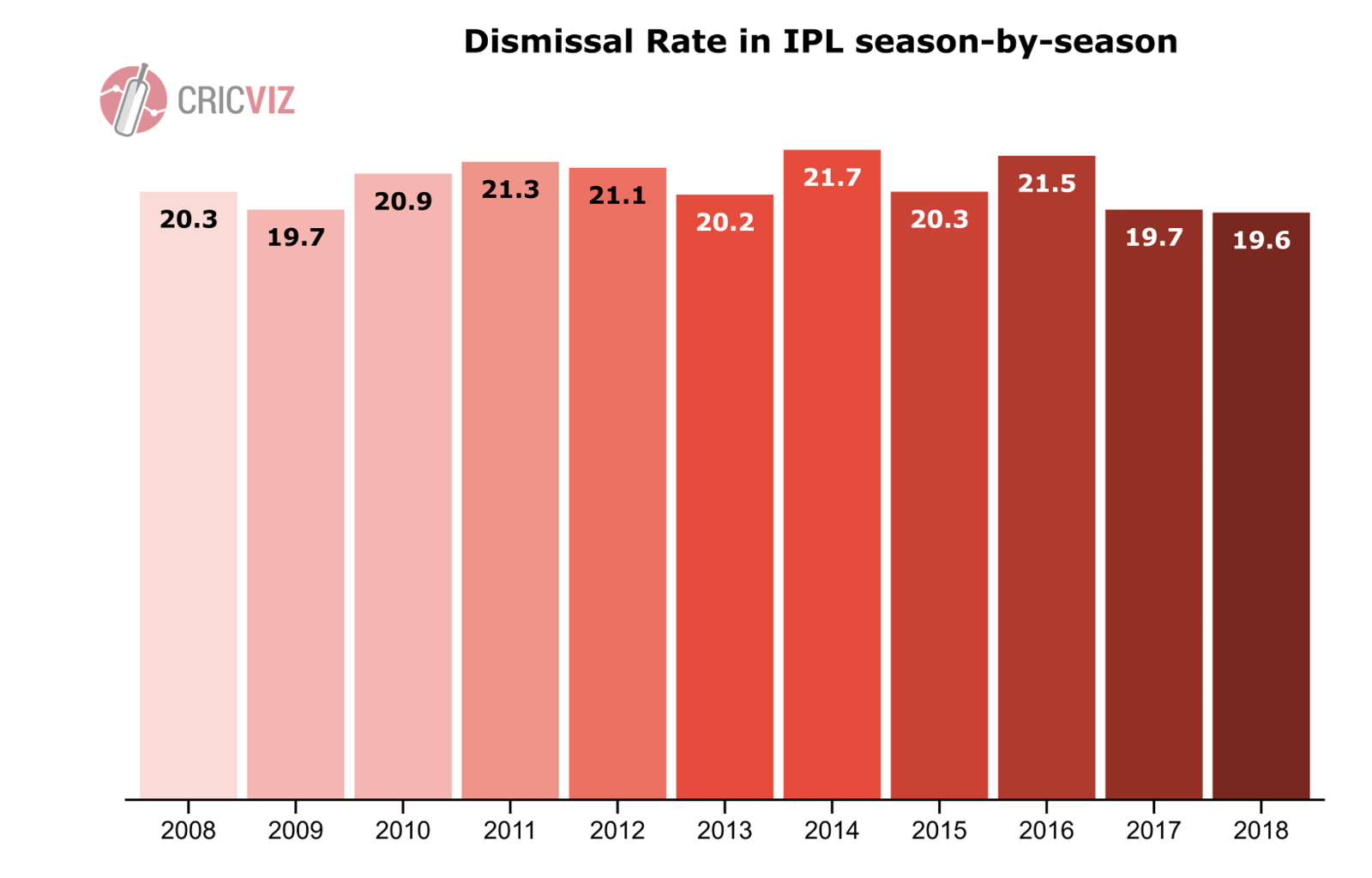 From that the conclusion seems to be a positive one: scoring rates are going up because batsmen are getting better at attacking, and changing their attacking mentality.

An interesting addendum to all of this; Sunrisers Hyderabad, who stand atop the leaderboard, are notable for their resistance to this trend. Their current economy of 7.13rpo makes this year the seventh best effort ever by an IPL team, their success built on intelligent bowling, flouting the fad for attacking with the bat. In this climate of ever-climbing run-rates, it’s a sign that the old adage still holds true – batting wins you matches, bowling wins you tournaments.