Using CricViz data, Patrick Noone outlines why England were right to retain Keaton Jennings in their Test squad for the winter tour of Sri Lanka.

Keaton Jennings has had a difficult summer. Recalled in place of Mark Stoneman for the second Test against Pakistan in June, the left-handed opener failed to pass fifty in any of his 10 innings during his second stint as a Test cricketer. There was some mitigation, of course. He was up against a seriously good Indian seam attack in particularly bowler-friendly conditions and it was not until the final Test of the summer that any opener in that series passed fifty. But Jennings’ methodical and, at times, robotic batting stance coupled with the repetitive nature of some of his dismissals have led to a perception in some parts that he is simply not up to the job at this level.

However, to further mitigate his struggles, we can use CricViz’s Wicket Probability Model. The model seeks to determine the likelihood of any given ball to take a wicket, primarily based on movement through the air and off the pitch. Four of Jennings’ dismissals against India came to balls with more than a 10% chance of taking a wicket and a further three were to balls higher than the Test average of 1.6%.

Only his second innings dismissal at Edgbaston and his first innings dismissal at The Oval were to balls with a wicket probability below the Test average. The old cliché of ‘there was a ball with his name on it’ would be an enormous understatement for the majority of the innings he batted. Yes, there were times when he should have played the ball better, most memorably in the first innings at Southampton when Jasprit Bumrah trapped him LBW with an inswinger that Jennings did not play a shot to, but that particularly delivery could be expected to take a wicket nearly 10 times more often than the average ball in Tests.

Before Alastair Cook announced his retirement, Rory Burns was expected to come in to the side at the top of the order for the Sri Lanka tour in place of Jennings. Burns is still likely to debut on that tour, but Cook’s absence has created an opportunity for a second opener and quite possibly saved Jennings’ career. Calls for left-field selections such as Joe Denly or James Vince to open the batting have surfaced since Cook’s announcement, but there is enough evidence to suggest that England would be right to retain the services of Jennings for the winter tour.

Against seamers, Jennings is dismissed once every 25 defensive shots he plays, while against spin, that figure leaps to once every 78

A series in Sri Lanka is always going to defined by spin bowling and that has been the case even more so in recent years. Since the start of 2016, spinners have found an average of 4.3° in Sri Lanka and the volume of spin bowling that batsmen face (69%) is higher than any other country, besides Bangladesh. Sri Lanka regularly open the bowling with spin, having done so in 16 of their last 28 bowling innings on home soil.

Batting against spin is Jennings’ strength. Of the top six who featured in the series against India and are in the mix for the Sri Lanka tour, only Joe Root averages more runs per dismissal and faces more balls per dismissal than Jennings against spinners.

Where Jennings has struggled against seam bowlers in his Test career to date has been a loose defensive technique. Against seamers, he is dismissed once every 25 defensive shots he plays, while against spin, that figure leaps to once every 78 defensive shots. He has shown himself to be adept against good quality spinners – Ravindra Jadeja and Ravichandran Ashwin are the only tweakers to have dismissed him in Tests. Furthermore, against balls that turn a large amount (more than 4.5°), Jennings has scored 73 from 146 deliveries and only been dismissed twice. To balls that deviate between 2.5° and 4.5°, he has scored 60 off 150 without being dismissed.

Jennings’ shot selection against spinners has also been sound. He has never been dismissed playing either the sweep or the reverse sweep and his run rate is in excess of 8 with both shots. 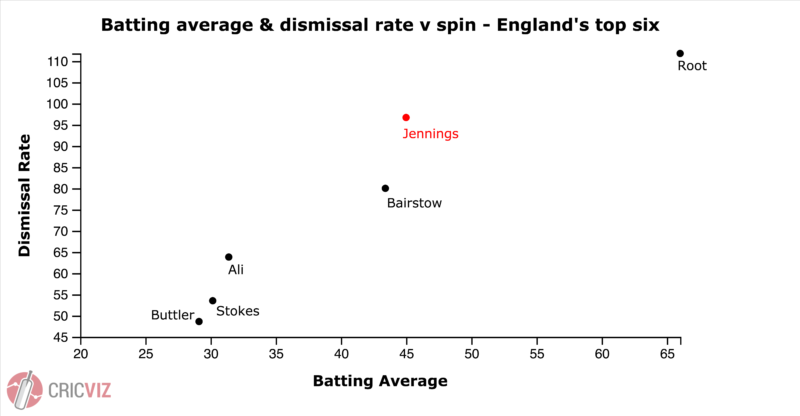 The two shots were a feature of Jennings’ debut innings, when he scored 112 in Mumbai. The conventional sweep brought him 16 of those runs from just eight shots played, while all three of the reverse sweeps he played went for four. It is an attacking, run scoring option for him against the slower bowlers and provides him with the release that he has often struggled to find against the quicks.

While none of this is a guarantee that Jennings will succeed in Sri Lanka, his Test career up to now suggests that his game is far more suited to the conditions that England are likely to face in the subcontinent. Therefore, his inclusion should be seen as far from being a gamble, rather he is England’s safest selection for a tour to Sri Lanka in the post-Cook era.

Patrick Noone is an analyst at CricViz, the cricket intelligence specialists