Australia recently reverted back to a 1986-style kit for their home ODI summer, and although results weren’t resoundingly positive on the field, it seems the vintage look has gone down well with supporters.

The nostalgic theme will now roll over to next year, as Cricket Australia will allow a public vote to decide which retro kit their one-day side will don for the home series against New Zealand. There are some absolute corkers to choose from, and some that might bring minimal benefit from revisiting. 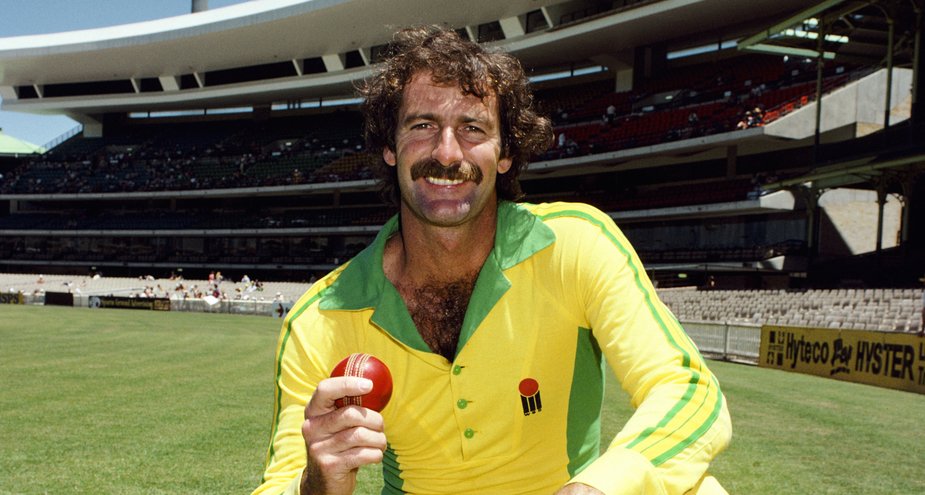 Dennis Lillee donning their iconic kit from the early 1980s

Australia were twice victors in the home World Series Cup in 1981 and 1984, as traditional whites were binned in favour of more striking, fragrant garments. Trevor Chappell was ordered to bowl underarm against New Zealand by elder brother Greg amidst the three-legged final in the 1981 edition, and the infamous villainy which accompanies the memory of this distinctive kit might just make it a likely candidate for a return. Plenty of buttons on offer with this one and a slender fit. Verdict 6/10 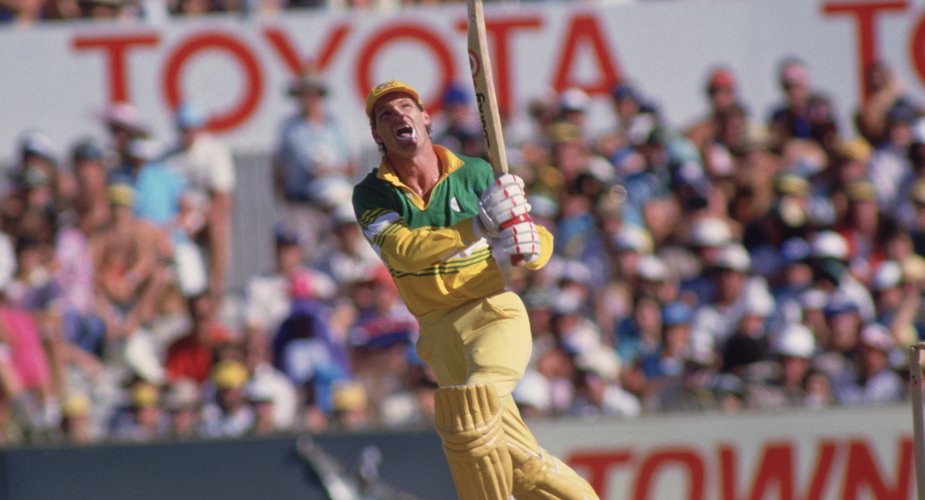 The Perth Challenge was wedged right in the middle of an Ashes series, and was perhaps somewhat ill-timed for the Aussies given their fourth place finish out of four. Three losses to England, Pakistan and the West Indies pinned them to bottom of the table, but a kit-spruce certainly perked up the aesthetics. The green top section to the shirt and abdominal stripes might not bring back victorious memories, but is certainly is a bit of a vibe.  Verdict: 7/10 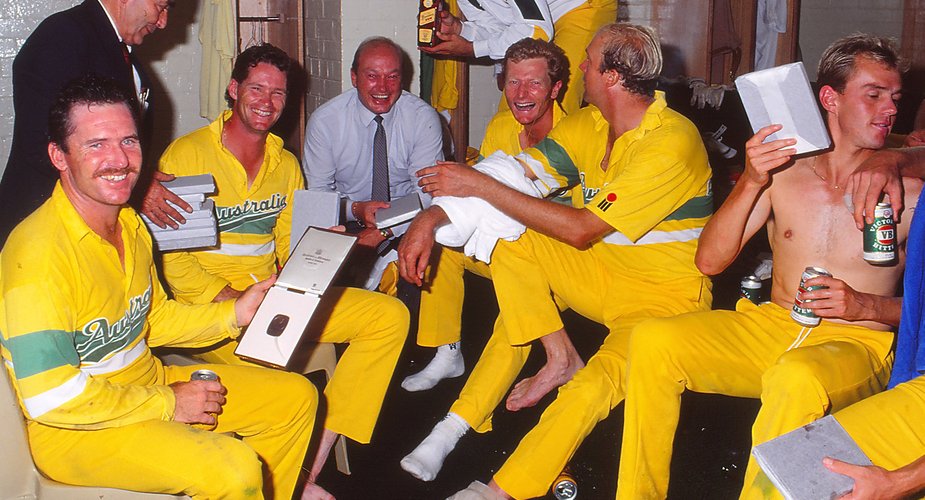 The Australia team celebrates series victory over Sri Lanka in 1990

Preceding their home World Cup campaign, Australia ditched the broad green section of their jersey in favour of a very yellow baseball-style kit. Tinkering with the thickness of the middle stripes also gave the design a whole new feel, and the slanted, joined up writing across the front adds a touch of American glamour to the gentleman’s game. If the fans vote for this one, they will be expecting a strong home run in next year’s ODIs. Verdict: (Sorry) 8/10 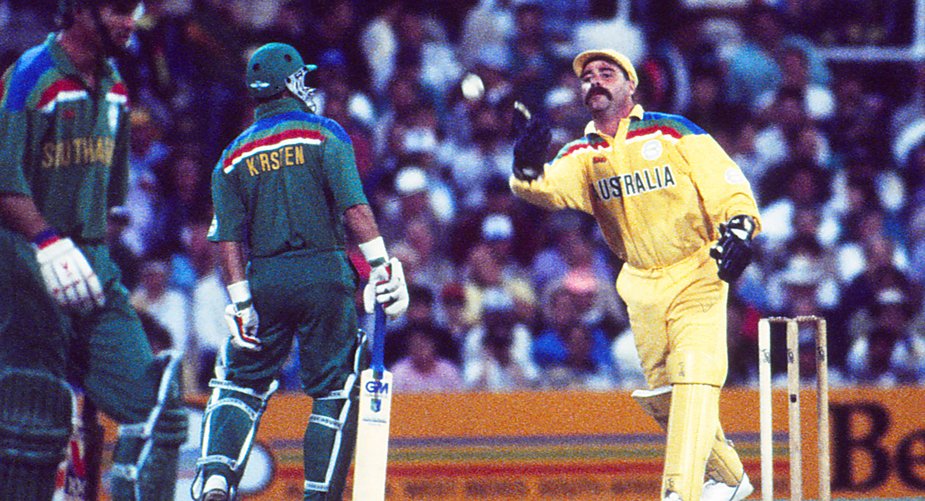 Mixed fortunes once again in this uniform for the Aussies, as a World Cup campaign hosted by themselves and New Zealand ended fruitlessly with Imran Khan’s Pakistan emerging as victors. That being said, it was certainly a monumental and loved jersey. It was the first Cricket World Cup with non-white kits, and the multi-coloured shoulder strip represented the congregation of all nine nations. A vibrant option with a welcome and well-presented international notion, this one could go down a treat. Verdict: 9/10 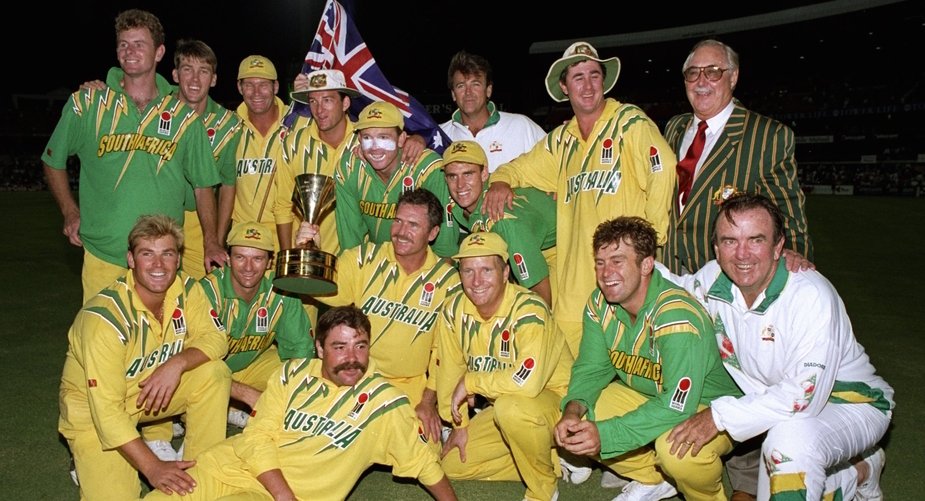 The conclusion of the 1992 World Cup marked a new era for the Australian side, and the introduction of a striking new kit came alongside debuts for then-burgeoning stars Shane Warne, Matthew Hayden and Glenn McGrath, who all began their illustrious ODI careers in 1993. This lightning strip might just be the key to irradiating fortunes for the current side, but it is likely to divide opinion on the fashion-front. Verdict: 6/10 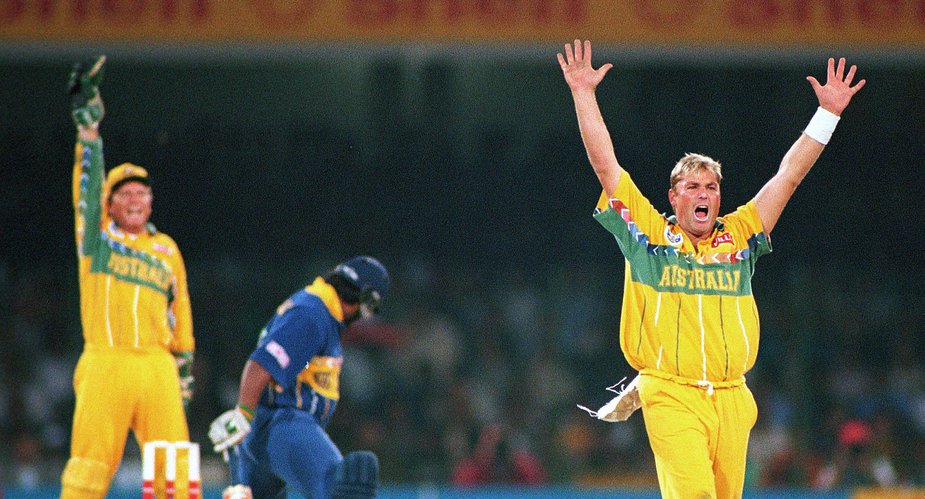 It’s not a surprise this kit only lasted one tournament

Design-wise, this kit certainly has a lot to answer for. An artistic impression of cricket-appropriate fashion-wear would surely find this one hard to even find subjectively acceptable. India, Pakistan and Sri Lanka staged the 1996 World Cup, and the imperious Mark Waugh smashed three centuries to guide Australia to the final. Sri Lanka edged the Aussies to lift the trophy, and thankfully for many supporters, the wacky kit got ditched upon the denouement of the tournament. The multi-coloured horizontal arrows did little to compliment the black and white vertical stripes – not quite vogue. Verdict: 5/10 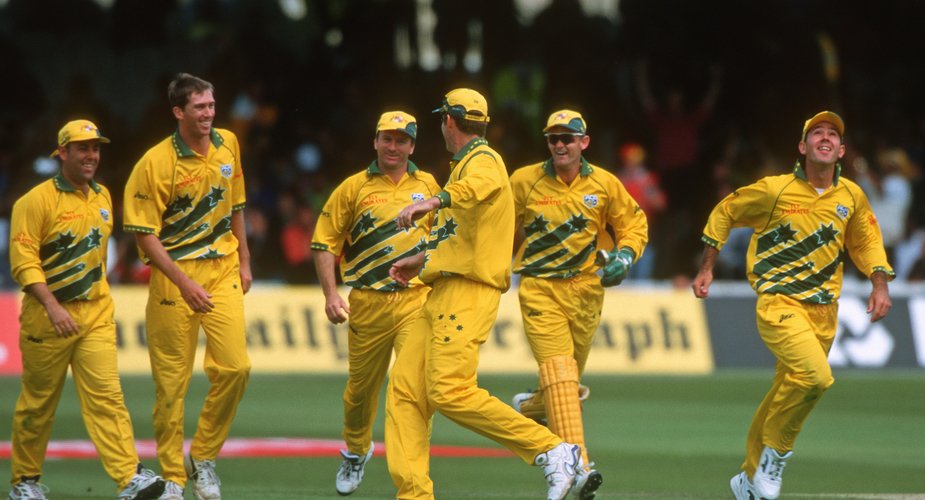 The 1999 Cricket World Cup, hosted predominantly by England, was a much more successful affair for the Aussies, despite donning yet another eye-sore of a kit. It could have been another close miss for Steve Waugh’s men had a farcical run out not denied South Africa their best chance of reaching a major final when Allan Donald fluffed his lines with the final ball of the semi-final. Australia went on to demolish Pakistan in the tournament finale, but they might rue the star-studded strip. Connotations of ODI dominance and a formidable line-up do accompany this design, but it is crying out for just an ounce of symmetry.  Verdict: 5/10 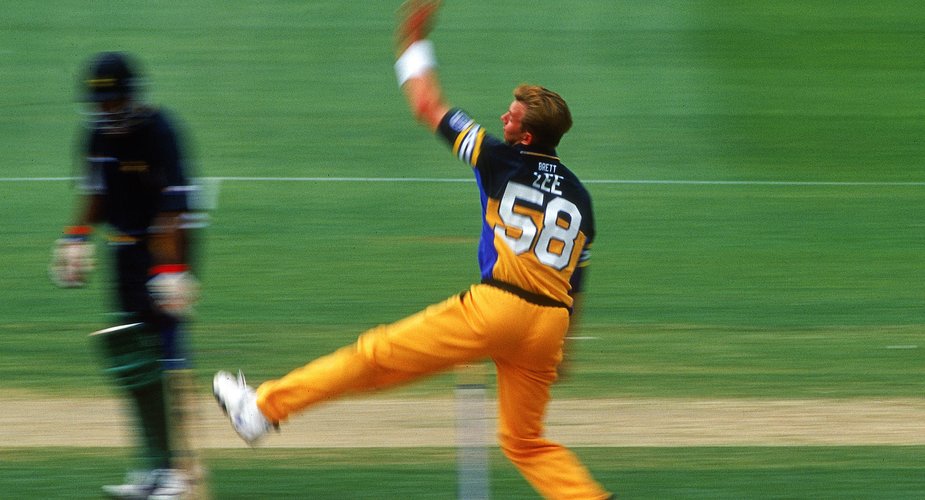 2000 saw Brett Lee make his ODI bow, as Australia’s decade of extreme dominance in the limited overs arena began to take full force. As the final option in the list, and one which is somewhat left-field, there is actually something remarkably charming about this kit. Reminiscent of the 86/87 Perth Challenge attire, the bold blue section is certainly more visually agreeable than the previously seen green band, and the multi-shaded cerulean compartments under the arm make for a complex, but impressive fit. The loose, full mustard trousers also detail something of a baggy sportswear dream. Verdict: Dark Horse. 9/10