After beating New Zealand to cement their place in the semi-finals of the World Cup, England are just two games away from creating history. Jo Harman believes their adapted blueprint – and the knowledge gathered over the course of the tournament – holds them in good stead.

The freedom of expression which has fuelled England’s climb to the top of ODI rankings, and their progress to a first World Cup semi-final for 27 years – albeit with the odd hiccup along the way – has been widely and repeatedly celebrated. And rightly so. But the meticulous attention to detail which has seen England morph from no-hopers to trailblazers has received less fanfare.

It’s tempting when you see Jason Roy and Jonny Bairstow race to another hundred partnership in the blink of an eye, or Eoin Morgan blitz 17 sixes in an innings, or Chris Woakes start his spell with three consecutive maidens while bowling at two of the greatest ODI batsmen that have ever lived, to think that this is a side built on individual brilliance. And to an extent it is – England are blessed to have a collection of some of the most naturally talented, watchable cricketers they’ve ever had, playing together in the same side.

“We do stick to our mantra the whole time and not actually be cagey or desperate – it won’t win us the World Cup”https://t.co/3jqGaXDZle

But alongside that, behind the scenes, are carefully concocted plans and in-depth analysis which have helped this team of hugely gifted players get the best out of themselves.

Other than a brief stint in New Zealand for the 2018 Test series, Nathan Leamon, the team analyst, has worked exclusively on white-ball cricket for the last two years to ensure that England have all bases covered at this World Cup. If England do fall at either of the last two hurdles, it won’t be down to lack of preparation.

But however assiduously you plan for a major tournament, a degree of flexibility is required, and successful teams at previous World Cups have shown that.

Is it coming home?? England now just 2 wins away from the #CWC19 title. New Zealand stumbling towards the semi-finals. All that and more. Listen and subscribe on Podcast App/Spotify.https://t.co/hq5WVDPDh9

Take Australia at the 1999 World Cup in England. After opening the bowling with Adam Dale and Damien Fleming in their first three matches in an attempt to exploit seam-friendly conditions, dropping Glenn McGrath back to first-change as a result, Steve Waugh’s side found themselves on the verge of being knocked out of the tournament after defeats to New Zealand and Pakistan.

They shelved the plan, threw McGrath the new cherry, and Australia went unbeaten for the rest of the tournament; McGrath taking 15 wickets in his next seven matches.

Or eight years ago at the Wankhede Stadium in Mumbai when, with the World Cup on the line, an out of form MS Dhoni pushed himself up the order – ahead of Yuvraj Singh, the Player of the Tournament – and got the job done.

England have similarly shown a willingness to adapt in this tournament; to rework the blueprint when circumstances demand it.

In the 44 ODIs England played from the start of the 2017 Champions Trophy to the start of this World Cup, Moeen Ali and Adil Rashid appeared together in 40 of those matches, and took 101 wickets between them. The two-spinner policy was absolutely integral to England’s gameplan, particularly in the middle overs when Moeen would put the squeeze on and Rashid would be freed up to hunt for wickets. More often than not, it worked.

In England’s nine matches so far in this tournament the pair have played together on only five occasions, Moeen sitting out the victories over Bangladesh, West Indies, India and New Zealand. 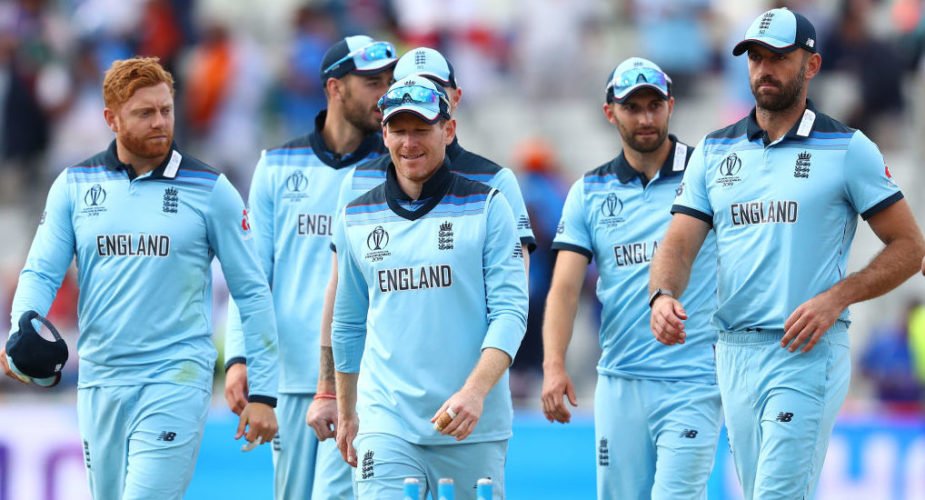 That shift in selection has been forced to an extent by Mark Wood’s pace renaissance in the Caribbean and Jofra Archer’s last-minute availability, leaving four frontline, in-form seamers to fit into three spots (not to mention the as-yet-unused Tom Curran, who impressed in the warm-ups against Pakistan), while Moeen’s poor form with the bat has left his place particularly vulnerable.

But, even so, England have shown courage and flexibility in departing from the tried and trusted formula which had brought them such success. In a tournament where pace has trumped spin – the top 13 leading wicket-takers are all seamers – they have had the wherewithal, and crucially the options at their disposal, to adapt.

Moeen Ali had a remarkable breakthrough year against India in 2014. The following spring, he was named a Wisden Cricketer of the Year. ? @WisdenAlmanack https://t.co/vD3InMvfNZ

The change has perhaps not helped the form of Rashid, who has still not been at his best and has spoken openly in the past about how much more comfortable he feels when he is playing alongside Moeen. But there is no doubt that it has benefitted the team as a whole.

Liam Plunkett, effectively Moeen’s replacement, has played in five matches at this World Cup and England have won them all comfortably. The 34-year-old, whose place in the squad was in doubt following Archer’s arrival, now appears undroppable.

All of which means we’re unlikely to see Moeen again in this tournament, which is regrettable in the sense that he’s done so much to get England to this position. But world champions need to be both adaptable and ruthless, and Eoin Morgan’s side have shown themselves to be both.