George Geary had been in his day, one of the best bowlers in the world and was also one of the last survivors of those who were playing regular county cricket before the Great War. A tall, powerful man, he bowled fast-medium well within his strength, with a short run and a beautifully easy action.

His stock ball moved naturally from the off and could be deadly if the wicket helped him, as when he ruined his second benefit, against Warwickshire at Hinckley in 1936, by taking thirteen for 43 [the match produced him £10]. This was varied by a delivery which came straight through and, a far more dangerous ball, the leg-cutter which pitched on middle-and-leg and left the bat sharply. This was the one which the experts dreaded and which secured the all-important wicket of Bradman, caught at slip for 29, in the Nottingham Test of 1934.

Apart from this, he could make full use of the shine to swing the new ball. Yet with all these gifts, he will probably be remembered chiefly as a stock bowler who would peg away cheerfully all day if need be, keeping the situation under control whether or not he was getting wickets. As a batsman, he never claimed to be a stylist, but he was typically effective: the more runs were needed, the more resolutely he would set himself to get them, not least by punishing ruthlessly anything which fell short of his very high standards of what first-class bowling should be.

In his last season, at the age of 45, when an injury prevented him from doing his full share of bowling, he scored three centuries. He was a fine slip, but in fact, his vast hands were equally tenacious anywhere: in The Oval Test of 1926, besides two blinding slip catches off Larwood, he caught a brilliant one low at mid-off off Rhodes to dismiss Arthur Richardson. 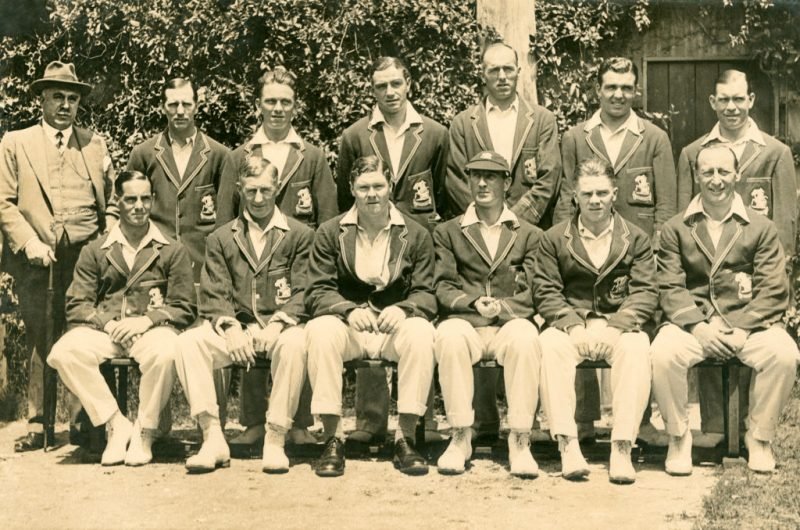 The 1928/29 MCC England touring team in Australia: Geary is standing fifth from left

Making a few appearances for Leicestershire in 1912, he gained a regular place in 1913, and in 1914, when he took over 100 wickets, he was picked for his first representative match, the Centenary at Lord’s, the Rest of England against MCC’s South African team. This should have given him his one chance of seeing the great Sydney Barnes bowl, but, when he arrived in the dressing room, he found Barnes urging the others not to play unless they received more money. Wisden says Barnes was prevented from playing by a strain.

At this point, Geary’s career suffered a serious setback. Serving in the Air Force in the Great War, he was lucky not to have his leg severed by a propeller; but the damage was such that, after an unsuccessful season in 1919, he decided that he was not for the moment strong enough for county cricket and went into the Lancashire League. It was not until 1922 that he resumed a regular place in the Leicestershire side.

In 1923 he appeared in a Test trial and in 1924/25 made his first tour abroad, for Lord Tennyson’s unofficial side in South Africa, where he was an outstanding success as a bowler. In 1924 he had been picked for his first Test, against South Africa, and in 1926 he played against Australia at Leeds, where Carr put his opponents in with disastrous results. According to Geary, his captain’s great mistake was taking his batsmen, not his bowlers, out to inspect the wicket. At any rate, when Geary came in the score, in face of a total of 494, was 182 for eight. He and MacAulay added 108, Geary making 35 not out, and, though he could not save the follow-on, he may well have rescued England from defeat. He played again in the final Test at The Oval.

That winter, he went with MCC to India and in 1927/28 was a member of their side in South Africa, where he took twelve for 130 in the first Test and was reckoned by the South Africans to be, on a matting wicket, the finest bowler of his type since Barnes. Unfortunately, in the second Test his right arm, which had troubled him intermittently for some years, became so bad that he could not play again until the last match, and further he missed most of the 1928 season. Indeed his career was in jeopardy.

No one ever saw him out of temper: he was always cheerful and smiling and had a wonderful sense of humour which made him a splendid raconteur

He was saved by Lord Harris, who enquired into his case and insisted upon his having the best medical treatment. An operation was performed on his elbow and was so successful that he was not only able to accept an invitation to go to Australia in 1928/29, but, with 19 wickets at an average of 25, headed the bowling averages in the Tests. At Sydney in the second Test, he followed five for 35 with an innings of 66, and in the final Test at Melbourne, he had in the first innings the astonishing analysis of 81-36-105-5.

In 1929 he played in the last two Tests against South Africa; in 1930 he played against Australia at Leeds, and in 1934, also against Australia, at Nottingham and Lord’s. At Nottingham, coming in at 165 for six, he scored 53, including ten fours, and helped Hendren to put on 101 in 110 minutes. In 1932 he had gone with Lord Tennyson’s team to the West Indies and, as he also once took a coaching appointment in South America, he was one of the most widely travelled cricketers of his time.

Related Story: Martin Bicknell: ‘The best period of my career bizarrely coincided with me not playing for England’

His last season for Leicestershire was 1938 and then he became the professional at Charterhouse. He showed himself a great coach and in particular, was one of the few who could really teach bowling. Feeling that at 65 he would be rash to undertake another three-year contract, he left Charterhouse in 1959 with great reluctance on both sides, but Rugby were desperate for help and persuaded him to come and stand behind their nets. Before the end of the first net, he could bear it no longer, had his coat off and continued to bowl for another 11 years.

Few professionals have been more popular and more respected, and deservedly. No one ever saw him out of temper: he was always cheerful and smiling and had a wonderful sense of humour which made him a splendid raconteur. EW Dawson said that, when he took over the Leicestershire captaincy immediately after coming down from Cambridge and utterly inexperienced, he owed everything to Geary, who, though not yet the senior professional, looked after him like a father.