Opening batsman Prithvi Shaw has been ruled out of India A’s warm-up matches on their tour of New Zealand after suffering a shoulder injury during a Ranji Trophy match last week.

Shaw, who has played two Tests for India, was captain of the youth team that won the Under-19 World Cup in 2018. In a match for his state side Mumbai, Shaw hurt his left shoulder while saving runs from an overthrow on the opening day of their match against Karnataka.

“Team India batsman Prithvi Shaw suffered a rotator cuff and labrum injury to his left shoulder while fielding on Day 1 of the Ranji Trophy match between Mumbai and Karnataka,” the BCCI said in a release. 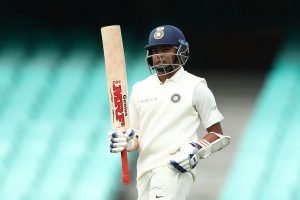 “Prithvi [Shaw] is currently under rehab at the National Cricket Academy [NCA] in Bengaluru and has been ruled out of India A’s two upcoming practice games in New Zealand,” it further stated. “A call on his participation in the one-day and four-day matches will be taken at a later stage.”

Shaw was named in both the India A squads – for the one-dayers and tour matches – with selection committee chairman MSK Prasad making it clear that they want Shaw to get as much “game time as possible”.

The 20-year-old had a promising Test debut in 2018, when he scored a century against West Indies in Rajkot. He was later selected for India’s tour of Australia, but an ankle injury forced him out of the series even before it began. Further trouble marred his return when the youngster was suspended until November 2019 for a doping violation. 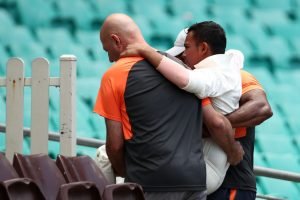 Prithvi Shaw injured his ankle in Australia in 2018

However, Shaw returned to cricket with confidence, having struck his maiden double century in the opening round of the 2019/20 Ranji Trophy, against Baroda last month. He was also prolific in the Syed Mushtaq Ali trophy, scoring three fifties.

India A are scheduled to play two tour matches on January 17 and 19 in Lincoln, followed by three unofficial one-dayers and two unofficial Tests against New Zealand A.