Australia coach Justin Langer has called out what he believes to be double standards in on-field behaviour during the 2018-19 Border-Gavaskar Trophy which his team went down 2-1 to India and their expressive captain Virat Kohli.

Australia were defeated in the absence of their two star batsmen, Steve Smith and David Warner, who were both suspended for a year by Cricket Australia, for their involvement in the ball-tampering scandal during the 2018 Newlands Test against South Africa.

As a consequence of those events, Australia’s on-field behaviour was under severe scrutiny as they, under the new leadership of Tim Paine, set about reassessing their team culture, with an increased focus on holding back on the verbal barbs that the side has historically been known to dish out to the opposition.

“We can’t fight back because it felt like we had our hands behind our backs and we just had to take it. It just felt a bit double standards to me"

However, that resolve was severely tested by the incessantly chirpy Kohli, who was his usual aggressive self, according to Langer. “I remember that afternoon [during the second Test in Perth, feeling] like a punching bag,” Langer said in the Amazon Prime documentary The Test.

Related Story: Why India decided against withdrawing from Australia tour after ‘Monkeygate’

“We can’t fight back because it felt like we had our hands behind our backs and we just had to take it. It just felt a bit double standards to me. Imagine if we behaved two out of ten (of) that.”

Addressing his team, Langer had said in the documentary: “Boys, to be honest, I’m pretty emotional tonight, eh? Because I just think, one: you’re all probably feeling the double standards, the way their captain is carrying on, we sort of have to be really careful.” 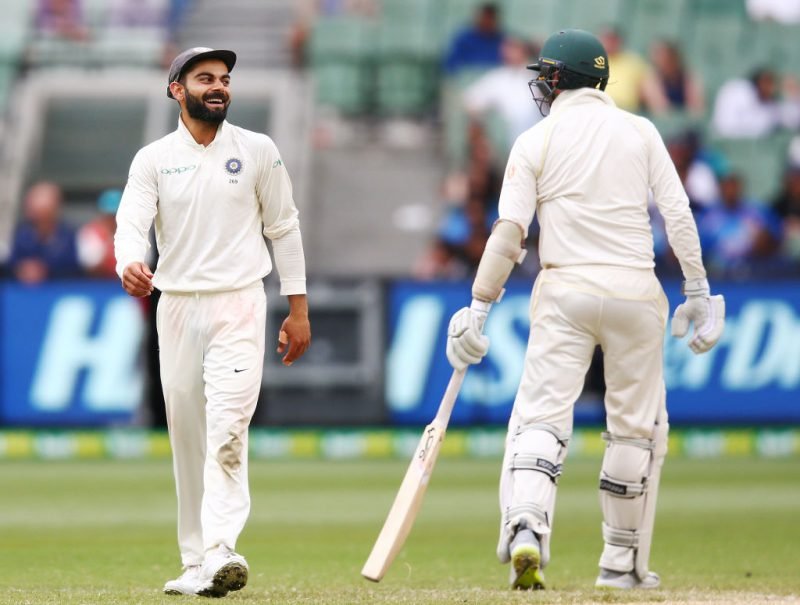 Langer believes Australia had their hands tied behind their backs during the India series, as Kohli chirped away

Following Langer’s address to the team, Paine decided that enough was enough, and took the battle to the opponent, even though it was not what Australia had planned at the start of the series.

“The plan was not to talk to him when he was batting, when we were batting, it’s kind of up to the individual what they want to do,” Paine said.

“I sort of just had enough and thought you also have to stand up for yourself and your teammates and that was one of the reasons I thought, ‘no, I’m the captain, it’s my turn, I have to stand up and show him we’re here for the fight’.”