Justin Langer, speaking on the Somerset Stories podcast, recalled the time a stalker made life difficult for him during his stint with Somerset.

The current Australia head coach joined Somerset in 2006 on an initial six-week deal, making his highest first-class score of 342 only a month later. He would then go on to extend his stay to four seasons, with an English “stalker” playing a major role in his extended spell in county cricket.

“What had happened a few years before, on the ’97 Ashes tour, we were playing at Leeds and I was running laps and doing some boxing with the trainer,” Langer said. “And this bloke in the crowd, he was drinking pints of beer with his mates as you Pommy blokes love to do and then abuse everyone. And he’s like, ‘Langer you’re sure rubbish, sure rubbish.’

“I did a bit more boxing, ran some laps and he just kept going on and on. And I just snapped. I ran from one side of the goal post, sprinting … And I said, ‘You’re a coward, come down here and say it to me, you bloody coward. Just come and tell it to my face.’ And he’s going, ‘Oh don’t be so serious, you don’t get the English humour.’ [And I said] ‘I don’t care about your English humour, you come down here.’ Our trainer’s grabbing me, it was going to be a full-on row with 20 of his mates.

“And that’s what happened in ’97, and from that day this guy kept turning up, every Ashes he’d turn up behind the nets, ‘Got the coward’s back.’ He turned up in Australia, ‘The coward’s back.’ And then he set up this Facebook page, using my alias and he’d be abusing people, trying to get the police involved and the coward kept up.”

The then-Somerset coach Andy Hurry and physio Darren Veness would ultimately help Langer get rid of the stalker, which prompted the Australian to sign a contract extension with the club.

“So I kept fast-forwarding. We’re at Guildford, I get a 300, I’m feeling pretty relaxed with the world, fielding at first slip and guess who turns up? The stalker turns up, with about four of his mates. He’d brought the seven dwarfs and put them down like seven little statues, and he’s standing there with his mates and they’re just abusing me, ‘The coward’s back.’

“And I was going back to Australia three days later. Anyway, this is what happens next. Darren Veness, and Sarge (Andy Hurry), they start walking around the ground, and all the boys go, ‘This is going to be interesting, what’s gonna happen here?’ because they’re abusing their little Aussie mate. And they sit behind these guys in the temporary stands, and they sat there with their arms folded for about 20 minutes and we’re all watching between balls, ‘What’s gonna happen next?’ 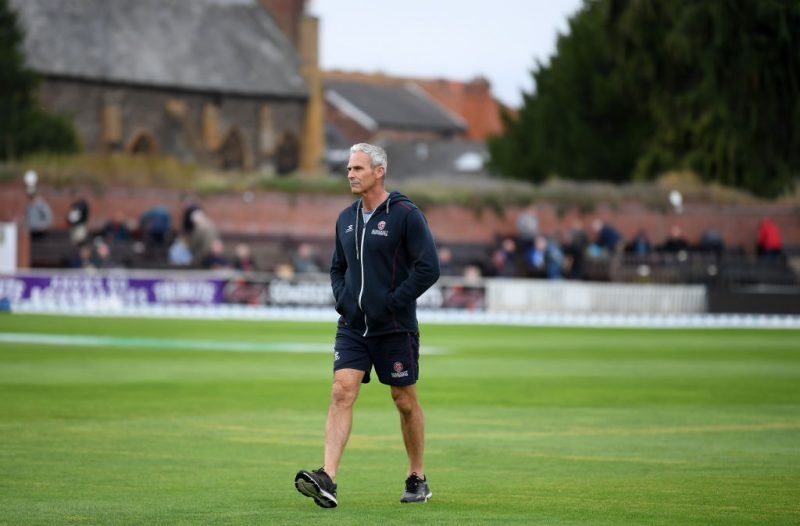 “Next thing you know,” Langer continued, “Sarge walks down, puts his arms around my stalker and whispers in his ear. And it wasn’t for 10 seconds, he whispered in his ear for two minutes. Next thing you know, the stalker and his four mates pick up the seven dwarfs, pick up their bag, I’ve never seen them ever since … I’ve never seen this guy ever again.

“Anyway, we go on the bus that night, and I say to Sarge, ‘What did you say to him?’ And he’s like ‘I can’t remember mate.’ I said, ‘Alright, where’s the contract for next year? I’ll sign it right now’. And he goes, ‘What are you talking about? What about Sue and the girls?’ And I said, ‘Don’t worry about Sue and the girls, I’ll look after that. I’ll sign the contract for next right now.’

“And he goes, ‘What do you mean?’ I said, ‘If you and Daz are going to have my back like that and show me that loyalty and sort it out, you got me for life.’ And then I ended up having three years. And people don’t know that’s why I came back to Somerset. Because of Darren Veness and Sarge, who had my back and looked after me, and loyalty’s my number one. And then I had three amazing years at Somerset. And those two guys, to this day, are two of my great friends.”