Geoffrey Boycott has doubled down on his view that “expert” commentators must have played the game at the highest level in order to perform their role.

Earlier this year, Boycott wrote in the Telegraph that he believed only men’s international cricketers could fulfil the role of the expert commentator. He was later criticised for those comments by former Australia captain and current broadcaster Lisa Sthalekar.

This week, Boycott reiterated his point of view and criticised the BBC for being “too busy getting rid of quality for [tackling] inequality.”

Speaking to the Cricket Badger Podcast, Boycott said: “There are two types of commentators. One, the commentator who sets the scene – the John Arlott, the Brian Johnston and I think Jonathan Agnew is doing a marvellous job, Jonathan’s good. They are the people set the scene and do the ball-by-ball. [The] expert is different, call him what you want.

“The guy or the girl that comes in and gives you something that’s not setting the scene. To do that, I really do think you need to have played at the top level. I mean, how do you talk about top class fast bowling when you’ve not faced 90 miles per hour from [Malcolm] Marshall, [Joel] Garner, [Colin] Croft, [Dennis] Lillee, [Jeff] Thomson. How do you talk about that?

“If you want stories and incidents, then you need people who’ve been on tour to India, to Australia, to West Indies, to South Africa and things happen. Stories happen and so you can relate those and that part of broadcasting particularly radio, sometimes you can get it on television…if you haven’t done that, as an expert, that’s what expert means doesn’t it – you’ve actually done it, you’ve got the credibility, you’ve been there and I don’t see how you can do the expert side if you haven’t experienced it.

“You can do it, but whether you can do it good is another matter and I’m not sure the BBC understands that, they’re too busy getting rid of quality for [tackling] inequality.” 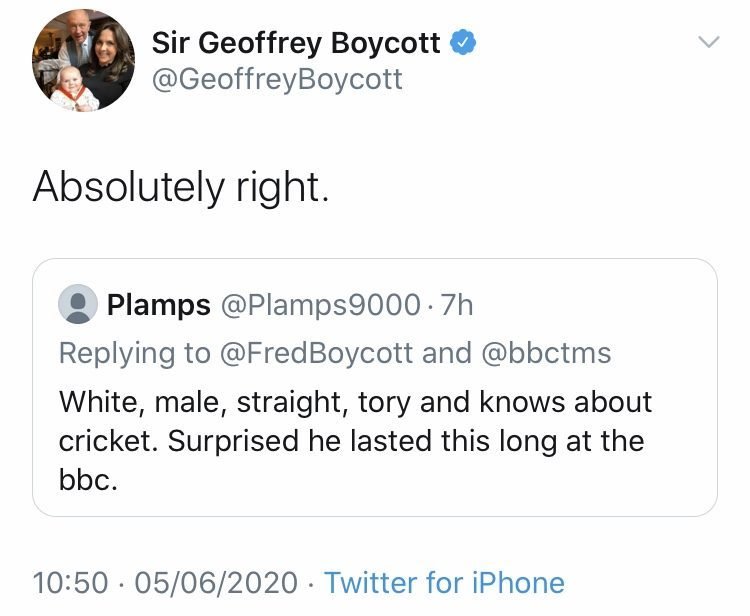 It’s not the first time the former England captain has criticised the publicly funded broadcasting company. In June this year, after it was announced that Boycott would not be part of the BBC’s commentary team for the 2020 international summer, he responded to a tweet from an anonymous account that read, “White, male, straight, Tory, and knows about cricket. Surprised he lasted this long at the bbc [sic]” by saying, “Absolutely right.” Boycott has since deleted his response.