Former England captain and ECB director of cricket, Andrew Strauss, has expressed his disappointment at English candidates being overlooked for coaching roles in The Hundred, while also weighing in on how best to replace the “fantastic” Trevor Bayliss.

Bayliss, who was appointed by Strauss as England’s head coach in 2015, will leave the role at the end of the 2019 Ashes series.

The ex-England opener, speaking to the media at Lord’s on Wednesday, believes that it will be difficult for one coaching unit to cover all formats in the international arena for England. “I don’t think its sustainable for the same coaching team to do everything,” he said. “Whether it’s a coach or assistant coaches, you need people to be able to come and go because it’s just too much.

“You can’t play and prepare at the same time. If you’re playing one series, you need someone preparing for the next series. It’s very hard to do that when there’s only one coaching team.”

When asked whether his view clashed with the beliefs of his ECB successor, Ashley Giles, Strauss replied: “His thinking at the moment, from what I’ve heard, is that he feels potentially there’s value in having one head coach who looks after the whole thing, who you would identify periods of rest for, and then have support staff who would dip in and out. I think that makes sense.” 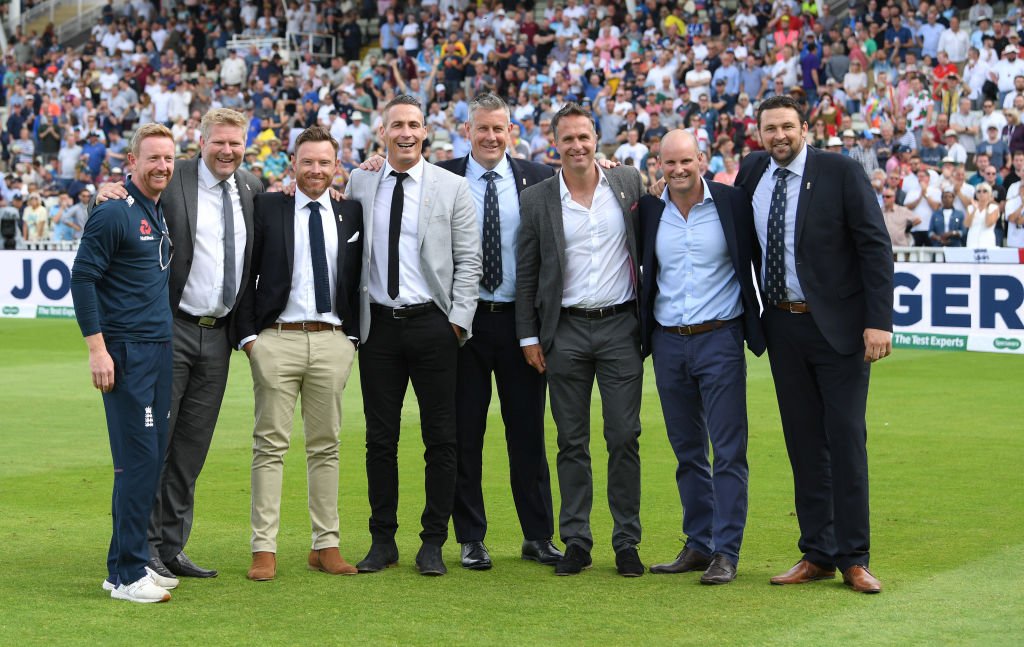 Ashley Giles, Andrew Strauss and other 2005 Ashes heroes were in attendance at the first Ashes Test in Edgbaston

The former Middlesex batsman lauded Bayliss as a “fantastic England coach”, and although the Aussie will be a tough act to follow, he does believe there are some “very good candidates” to take his place. According to Strauss, Bayliss will be remembered as the coach who helped revolutionise England’s white-ball fortunes in partnership with captain Eoin Morgan. England’s dramatic World Cup final win last month – their first ever – has cemented his legacy.

“Ten surreal minutes later, Stokes staggered out again, down those steps, dirt still caked across the front of his shirt. It was time to finish the job.”

Read @Phil_Wisden on the greatest cricket match ever. #cwc19 #CricketWorldCupFinalhttps://t.co/G7Bdb9vIGX

“Winning the World Cup is an extraordinary feather in his cap,” he said. “Trevor has been successful everywhere he’s been in white-ball cricket, [but] this is his crowning moment as a coach. He will be slightly frustrated that the Test team hasn’t progressed as he would have liked. The trend has generally been that we’ve been very good at home and less good away from home, and that’s continued a long-term trend really.

“A coach can only do so much, but we’ve got to do more to prepare players to perform away from home. That’s a sort of systemic thing rather than a thing the coach has full control over. He’s been a great man and if you speak to the guys who have played under him they all have massive respect for him as a man – you can’t ask for more than that.”

Unless England coaches get an opportunity, how do they get the experience?

World Cup-winning coaches Gary Kirsten and Matthew Mott were this week appointed to lead the men’s and women’s teams for the Cardiff-based team in The Hundred. The announcement was made a few days after Shane Warne was named coach of the men’s Lord’s-based London outfit; he became the third Australian coach to be unveiled by the ECB for the new 100-ball competition, following the appointments of Andrew McDonald and Simon Katich, who will coach the Birmingham- and Manchester-based teams respectively.

“I love the concept of The Hundred and it has grabbed my attention in the same way the IPL did.”https://t.co/PLi6HLdXFC

Strauss understands the allure of high-profile foreign talent but is perturbed by the dearth of English coaches being signed up for the competition that will launch in 2020. Many fans and journalists have questioned the recruitment strategy in recent weeks.

“That was a great opportunity for some English coaches to be appointed, but each of those teams will have their own reasons for appointing an experienced coach who has coached in T20 cricket elsewhere,” said Strauss.

Related Story: Brendon McCullum on Baz-Ball: ‘I don’t really like that silly term people are throwing about’

“There is a bit of a chicken and egg situation: unless England coaches get an opportunity, how do they get the experience? We’ve always got to look for opportunities for our English coaches to get more experience than just county coaching gigs. They need to do more than that if they’re going to be viable candidates for England jobs going forward.”