Centuries for Kane Williamson and Ross Taylor, with little joy for England and, in particular, Joe Denly. Taha Hashim reflects on six deliveries from the final day of the second Test between England and New Zealand, with a draw giving the hosts a 1-0 series win.

An early life for Kane Williamson. Ben Stokes managed to nab the New Zealand captain’s glove in the fourth over of the day, but Ollie Pope couldn’t hold on diving to his left. Then again, he shouldn’t be in this team as a wicketkeeper, should he?

Just a beautiful stroke. Sam Curran came around the wicket and Williamson shifted forward to caress the ball through the covers. It brought up his fifty and a century partnership with Ross Taylor. Any hope of a miraculous English win had been extinguished.

Jofra was ecstatic. But why wasn’t everyone else? He’d done it! He’d got the big wicket and outwitted Williamson.

With a change of action, the front arm dropping off and the knuckleball the delivery of choice, Archer extracted a lob to midwicket from Williamson, with Joe Denly there to take the simplest of catches. Except he didn’t. His teammates were in disbelief. This might need to be reworked.

Cricket allows everyone to look a bit silly at times, whether it’s a dropped catch, a rubbish long-hop or your stumps out of the ground first ball. At least we’ll always have that screamer at Lord’s, Joe. 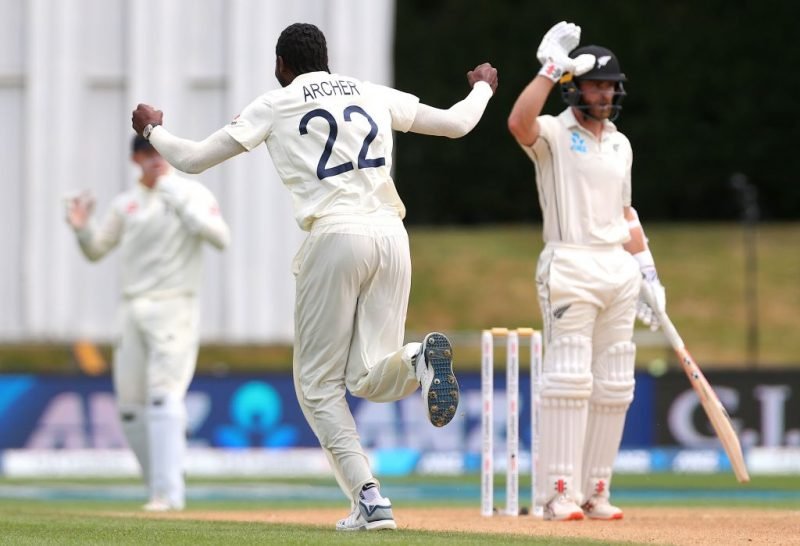 A regulation single but an important one in the context of Taylor’s illustrious Test career. It took him to the milestone of 7,000 Test runs, making him just the second New Zealander to reach the landmark. With the match petering out, it really did become a day for personal glories.

A bit too keen

As the prospect of rain looked set to become reality, the task was set for Williamson and Taylor to race away to centuries. Even then, what was this all about?

Williamson dropped one into the off side on 97 and had Curran hit, Williamson would have been on his way, not even close to making his ground. Instead, he picked up another run courtesy of the overthrow. Three figures arrived soon after.

What a way to get through the nineties. Taylor turned on one-day mode, a very happy man in front of Joe Root’s part-timers. He began the over on 89 and was on 99 three balls later. The ton, Taylor’s 19th in Test cricket, came with an almighty wallop over midwicket. Just two balls later the ground staff raced on to cover up as the heavens opened. Timed to perfection.