Australia off-spinner Nathan Lyon, who has been a bit of a sideshow for most of the Test series, was the star of the closing act as his five wickets on day four in Adelaide ensured victory over Pakistan by an innings and 48 runs. Rishad D’Souza examines six balls that tell the story of the day’s play.

Down but not out

Before Lyon strangled the visitors with unrelenting accuracy and subtle variations in angle and turn, Shan Masood and Asad Shafiq had offered Pakistan hope of what might have been, with a battling century partnership.

Masood, who had displayed positive intent the previous evening even as his side slipped to 39-3, resumed the day on 14 off 55 balls. He played two pull shots for four off Mitchell Starc in the 22nd over. The first one was edgy, but he nailed the next one, sending the ball scurrying to the deep midwicket fence. That shot set the tone for a splendid 68, which featured eight fours and a six off Lyon.

Australia win by an innings and 48 runs to take the series 2-0 – their fifth successive series sweep against Pakistan at home!#AUSvPAKhttps://t.co/fDmmCmmiFO pic.twitter.com/bY53yQANQM

The typically restrained Shafiq stepped down to Nathan Lyon and launched him over mid-off for four – a shot that may have inspired some confidence in Pakistan supporters. He and Masood not only batted out the entire first hour, but also took the aggressive route every now and then to transfer some of the pressure back on the Australian bowlers.

Lyon, Australia’s premier spinner, is a threatening proposition on day four and five surfaces, but both Masood and Shafiq were playing him quite comfortably for the most part and were not hesitant to go aerial against him. In fact, he had picked up only two wickets for 179 runs all series until this innings. Then, Lyon hit back.

Masood, who had charged Lyon and launched him over long-on, advanced once again and tried to send the ball rocketing over long-off this time, but Lyon was sharp enough to spot the batsman’s movement down the track. He pulled his length back ever so slightly and Masood was only able to hit the ball with the toe-end to be caught at mid-off, ending a promising 103-run partnership.

When wickets were hard to come by for Australia in the first session, Lyon wasn’t shy of being innovative to try and make things happen. He came from round the wicket to the well-set Shafiq and Tim Paine gave the bowler a leg-slip. 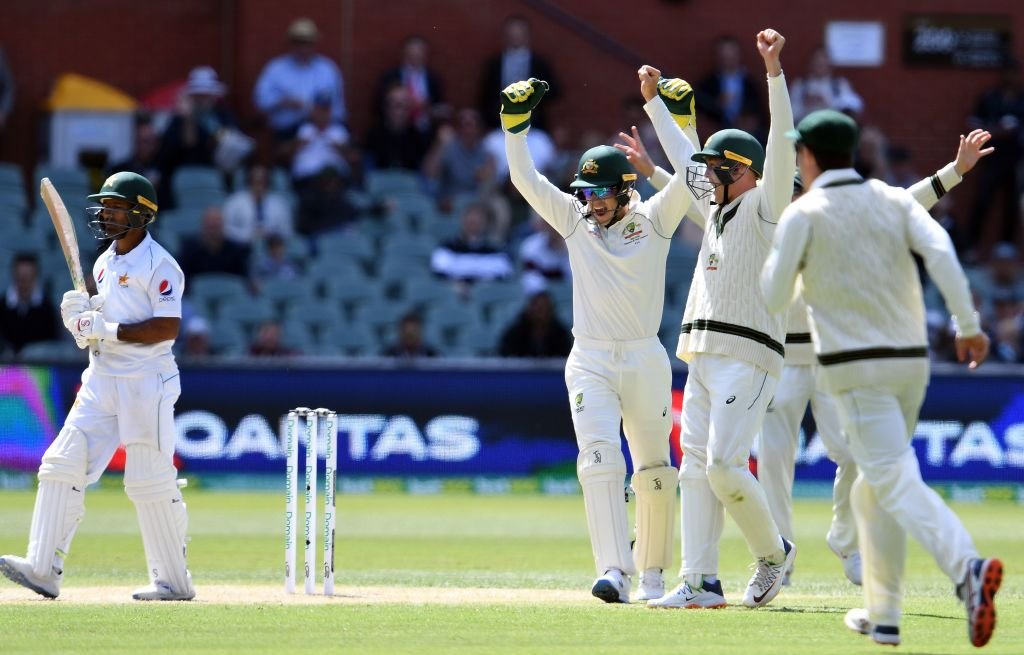 Asad Shafiq was one of Nathan Lyon’s five victims, falling into a simple trap

Meticulously, he plodded away at a seemingly harmless straight line, tempting Shafiq to make the mistake of instinctively nudging one. It was a battle of patience and Shafiq blinked first, falling into the very blatant trap the visiting side set for him as he tickled one straight into the hands of David Warner down the leg side.

Another five-for for Nathan Lyon

After dismissing the two half centurions, Lyon continued to bowl tight lines and generating spin to keep chipping away. He had Iftikhar Ahmed caught at short leg for a defiant 27, and trapped first-innings centurion Yasir Shah in front for 13.

Then in the 80th over, on the cusp of the availability of the second new ball after which Australia would have probably employed their fast bowlers to clean things up, he lured Shaheen Afridi with a flighted ball outside off. Like a true tailender, Afridi took the bait and went for the big hit, but failed to clear mid-off, giving Lyon his fifth.

What a way to win it! Pat Cummins seals the win with a direct hit! ? #OhWhatAFeeling@Toyota_Aus | #AUSvPAK pic.twitter.com/5TjkQP8nie

With all hope lost, Mohammad Rizwan looked to play some bold shots for a final hurrah. He got a few away too, but was castled when Josh Hazlewood got one to curve back in with the second new ball to uproot his off stump, sending him back for 45.

The last wicket came later that over in a run out: Mohammad Abbas set off for an ambitious run, but was sent back by Muhammad Musa, only to find his stumps disturbed at the non-striker’s end, courtesy a direct hit from Pat Cummins.