Despite Pakistan’s spirited batting performance on the fourth day of the first Test in Brisbane, Australia bowled with persistence and discipline to bundle them out for 335, winning by an innings and five runs. Babar Azam (104) scored a masterful century and Mohammad Rizwan (95) missed out on one by a whisker, but the Australian pace attack – led by Josh Hazlewood’s 4-63 – prevailed quite comfortably in the end. Rupin Kale identifies six balls that highlighted the day.

Babar made his intention clear early in the day, stroking a beautiful boundary against Nathan Lyon in the third over of the morning. The right-hander waited on a slightly short delivery from the spinner, and punched it off the back foot past point for Pakistan’s first four of the day.

Meanwhile, Babar Azam has scored a hundred at the Gabba. He has led Pakistan's fightback with a sensational effort.

It was a trademark Babar-Azam shot: a still head, a straight bat and the ball running away to the boundary ropes. The four offered a little preview of the things to come.

Rizwan gets an early reprieve

This seemed like an uneventful delivery on the outset but was crucial in how the game panned out. A straight delivery from Mitchell Starc strayed to the leg side and seemingly brushed off Mohammad Rizwan’s thigh pad, as Tim Paine made a diving stop behind the stumps. Replays showed that the ball had, in fact, clipped the batsman’s glove before flying to the wicket-keeper, who failed to get his hand underneath it.

Rizwan was on 2 at that point and went on to add 93 more runs to his score. He also played the perfect second fiddle to Babar, as the duo added 132 runs for the fifth wicket.

The top-ranked T20 batsman in the world is a treat to watch in every format of the game. One year after he hit his maiden Test century against New Zealand in Dubai last year, Babar finally registered his second with a masterful display at the Gabba.

He reached the milestone with a special shot: Starc bowled a good-length delivery outside the off stump, and the right-hander drove it through covers in style. It was a spell-binding effort from Babar, who leapt and punched the air after the special ton.

He looked particularly impressive in the build-up to the century, smashing five fours in eight overs.

Lyon steps up for Australia, again!

Just when it started to look like Azam and Rizwan were gearing up to make the hosts bat again, Paine threw the ball to Lyon. The off-spinner had not struck in the innings, giving away 48 runs in his 16 overs until then. However, like he so often does, Lyon made an impact when it mattered the most, dismissing Babar for 104.

Related Story: ‘If you think Kohli’s good, have a look at Babar’ – Tom Moody

Perhaps to avoid complacency, the right-hander became more cautious after bringing up his century. Lyon threw the ball wide, tempting the batsman to cut.

Babar took the bait, but waited on the ball too long, and ended up edging it to Paine, who took a sharp catch behind the wicket. 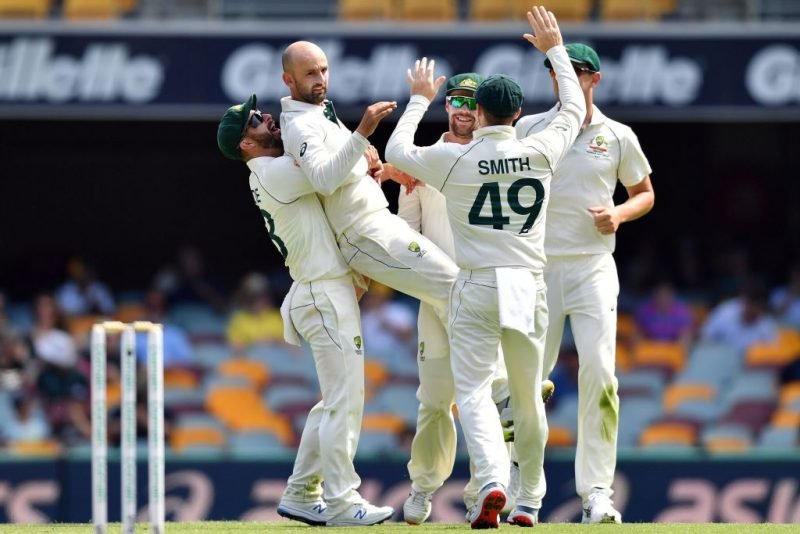 Lyon claimed just one wicket in the innings, but it was the biggest scalp of the day

Nervous nineties get to Rizwan

Pakistan had a terrific afternoon session, but they struggled to keep up the pressure after tea. Rizwan, who had notched up his maiden Test half-century in the innings, grew increasingly restless as he neared the three-figure mark.

Hazlewood banged it in short and wide outside the off-stump, and in an attempt speed things up, the Pakistan wicket-keeper slashed hard at the ball. However, he could not get the distance on the shot, and Lyon ran in from deep backward point to complete a simple catch.

Australia continued their love affair with Brisbane with another dominant performance. Hazlewood and Starc cleaned up the tail within six overs of Rizwan’s dismissal, as the hosts claimed a 1-0 lead in the two-match series.

Starc claimed the final wicket. After being slammed for four on the first ball of his over, he bowled a bouncer to entice the batsman to go for a big one. With Pakistan just five runs behind the Australian total, Imran took the invitation and tried to heave the ball over mid-wicket. However, a thick edge flew off his willow, and Cummins completed a simple catch at mid-off.