Jasprit Bumrah, who got the second five-wicket haul of his four-Test career at Trent Bridge on Tuesday, August 21, believes consistency is of utmost importance while bowling in the longest format of the game.

The fast-bowler’s spell of 5-82 powered India to an extremely dominant position, as they ended Day 4 with just one wicket separating them from victory in the must-win encounter, with England still 210 runs away from their 521-run target.

“In white-ball cricket, you try to outsmart the batsman. Here, it is all about patience and consistency. That was my main focus today. You can’t blast the batsman out in Test cricket. I was looking to bowl good lengths and lines, and challenge the batsman with that. In the end, it was a good day,” said Bumrah after the day’s play.

Congratulations to @Jaspritbumrah93 for his second Test five-for! India just one from victory! #ENGvIND pic.twitter.com/j5G2JPwskn

Joe Root, the first of Bumrah’s five victims in Nottingham, extended his string of average performances with a 40-ball-13 in the fourth innings.

He was dismissed off a length delivery from the Indian pacer, off an edge that flew to KL Rahul in the slip cordon.

“I had a chat with the captain about what lines to bowl to him. We decided to bowl a little fuller and then (follow it up with) one back-of-a-length delivery. That helped today and we got the result,” revealed Bumrah. 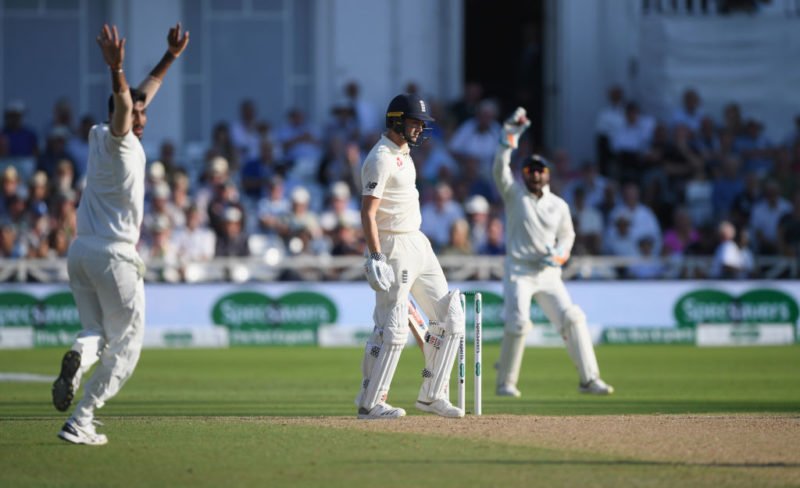 The 24-year-old broke a 169-run partnership between Jos Buttler and Ben Stokes with the new ball in the 83rd over of the England second innings with Buttler’s wicket, and followed it up by hitting Jonny Bairstow’s stumps off the very next ball. It was an impressive effort from him, as it gave India the opening they needed.

"In white-ball cricket, you try to outsmart the batsman; here, it is all about patience and consistency"

“We were happy that even when the ball got older, we were bowling good lines and lengths. The movement was a bit less. As soon as the sun came out, it became a little easier to bat. We always had to believe that if we kept applying pressure, we had to get the result,” said Bumrah.

“The second new ball was seaming a bit more than the older ball and I was focusing on that. We were just trying to get one wicket and not look too far ahead.”

BOOM! Bumrah breaks the deadlock and he takes two wickets in 2 balls. #TeamIndia now four wickets away from a win.

The opening bowler missed a lot of action on India’s tour of Ireland and England because of a thumb injury. However, he made a thumping comeback to the national side, and was quick to find his A game at Trent Bridge.

“I was injured, but I was being able to bowl even then. Back home, I always kept training and focusing on what works here (in England), on what suits my bowling. Even in the first two games, I was trying to keep an eye on what worked for both the teams. I was just trying to replicate those things in the nets sessions,” he revealed.

“When I made my first-class debut, my first spell was of 10 overs. So, I was always used to bowling a lot of overs in Ranji Trophy. That always helps. Even when I was injured, I was working on my fitness during the training sessions. I was always in touch with the trainers so that when I came back, I was in good space with respect to that aspect. All of that helped today.”