A draw was enough for Australia at Taunton to retain the Ashes with three T20Is still to play in the multi-format Ashes series.

Starting the day 221 runs behind Australia, it would have taken something quite special for England to pick up a win that would have kept the Ashes series alive.

England made the unusual move to declare while still in arrears to try to manufacture a positive result. They finished on 275-9, 145 runs behind Australia, with Nat Sciver top-scoring with an impressive 88. 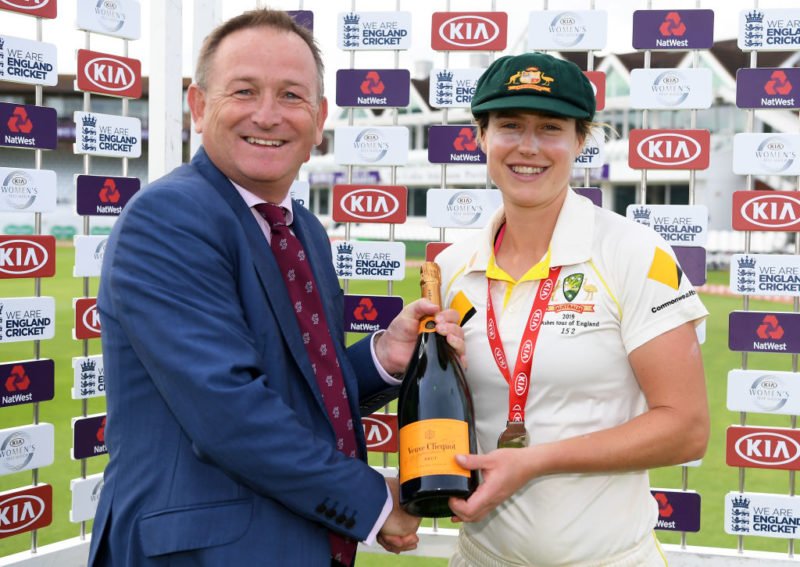 England experienced a glimmer of hope when they dismissed both Australian openers in the sixth over of their innings courtesy of Laura Marsh’s off-spin. But it was a familiar foe that denied England from making the most of that opening.

Ellyse Perry continued her outstanding form by hitting 76* – she is now the series’ leading run-scorer and wicket-taker. She has scored 405 runs in her last two Tests. Perry was fortunate to survive an lbw shout from Sophie Ecclestone early in her innings though as replays showed that had DRS been available and England opted to review, the decision would have been overturned.

Georgia Elwiss and Tammy Beaumont both took excellent catches to help dismiss Meg Lanning and Beth Mooney respectively, but Perry made sure the result was never in doubt as the game slowly meandered to a draw.

Sarah Taylor was forced off the field after being on the receiving end of a nasty blow to the shoulder, meaning that Amy Jones took over wicketkeeping duties for the latter stages of the day.

The draw puts Australia 8-2 ahead in the series with six points left to play for. As they were the holders of the Ashes going into the series, a drawn series is still enough for them to retain the urn.