In the new issue of Wisden Cricket Monthly, out on May 19, Phil Walker considers what the next instalment in the Ben Stokes epic will look like following his appointment as England Test captain while John Stern examines the MD role and what Rob Key will bring to it.

We also have a special feature on the ‘next Fab Four’, picking out four strokemakers with the potential to follow in the footsteps of Root, Kohli, Williamson and Smith, including an exclusive interview with Marnus Labuschagne, the world’s No.1 Test batter.

Elsewhere, James Wallace has an unforgettable encounter with Chris Gayle, Mark Waugh reflects on the defining moments of his run-laden career, Steve Rhodes recalls keeping wicket to Devon Malcolm on the day he made history, Isa Guha speaks to her recently retired former teammate Anya Shurbsole, and Jo Harman revisits England’s miserable summer of 1999 when Nasser Hussain’s side sunk to rock bottom.

We have all 18 counties covered in our ‘County Files’ section, which includes interviews with Keith Barker, Daniel Bell-Drummond and Reece Topley, and our all-star team of columnists are in fine touch: Mark Ramprakash considers the art of captaincy, Andrew Miller celebrates the “injection of excellence” Pakistanis have brought to county cricket, Lawrence Booth finds himself caught up in the culture wars, and Andy Zaltzman explores the number 79 in unprecedented depth.

“Some will still present this as ‘make or break’ for him, yet he slips into the blazer having made it a thousand times over. There’s nothing to break. He is, at 30, one of the game’s true untouchables. This distance from failure’s precipice will protect him in a job that needs him more than he needs it.”
Phil Walker on Ben Stokes, England’s new Test captain 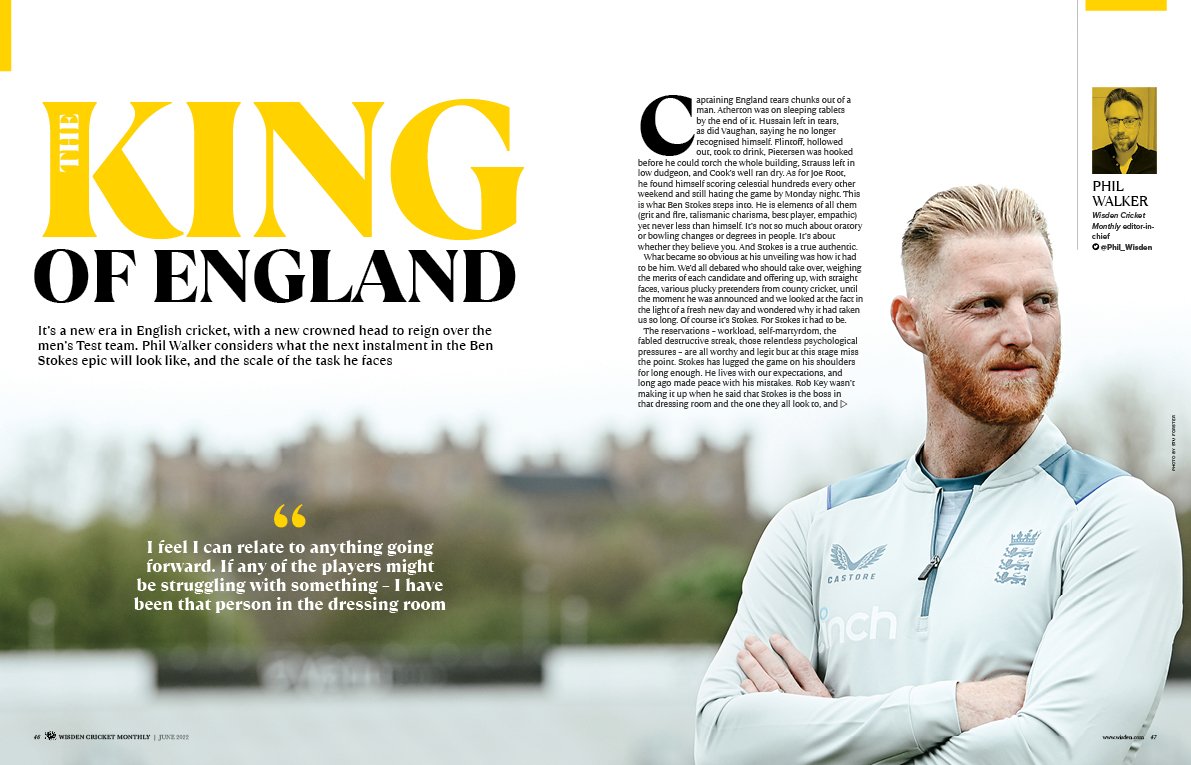 “I was a very poor captain, and I put that down to the fact that I didn’t really have a mentor to talk to about captaincy and the skills that were required. I tried to lead by example in terms of training and on-field performance, but I just didn’t communicate well enough with the different personalities in the dressing room.”
Mark Ramprakash reacts to Stokes’ appointment and examines what makes a good captain

“It’s been an injection of excellence that harks back to county cricket’s glory years, when every team seemed to be stacked with the cream of the world’s talent – and in the Indo-Pak entente of Cheteshwar Pujara and Mohammad Rizwan down at Sussex, there’s been a wistful echo of a more innocent age as well.”
Andrew Miller says the Pakistanis in county cricket are raising the bar

“She’s now quite the batting expert. She understands my game inside out, so I turn to her to tell me what’s going on.”
Marnus Labuschagne, the world’s No.1 Test batter, and one of our ‘next Fab Four’, says his wife is at the heart of his success 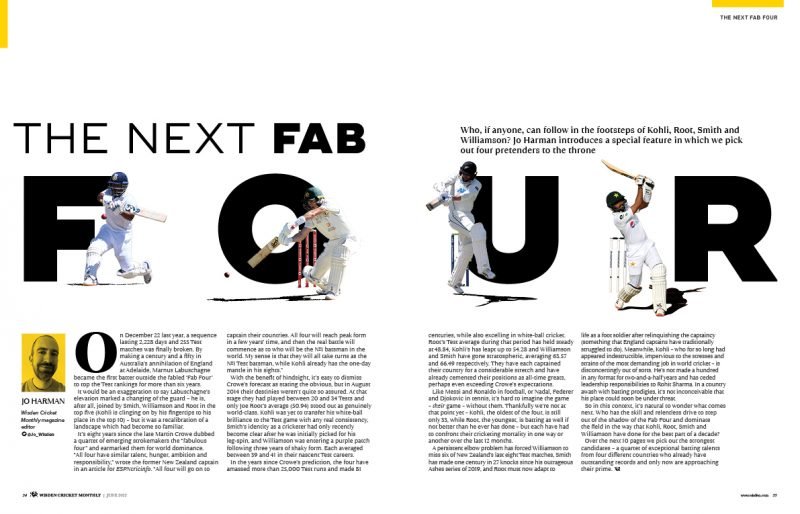 “The reaction to this year’s Wisden Cricketers’ Almanack was both a reassuring reminder that people still care about an ageing annual in the era of hot takes – as well as confirmation that cricket is no more immune to the culture wars than anything else.”
Lawrence Booth reflects on two opinion-dividing editorial decisions

“I don’t watch Test cricket, who told you that!? I went to the first day of the Barbados Test, I stayed a couple of hours, and after that – BEACH!”
Chris Gayle gives James Wallace an interview he’ll never forget 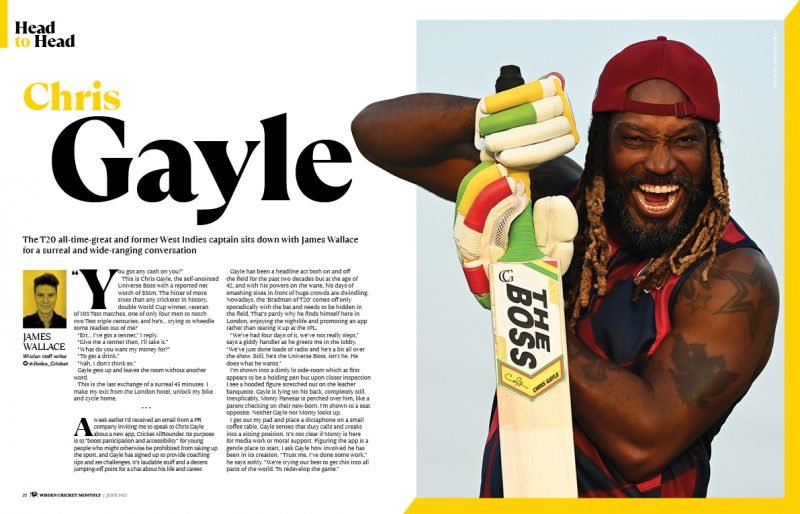 “I enjoyed playing with Nasser, we had a few little tiffs in the dressing room, but I think that was pretty commonplace with him. He just had that steely look in his eye, almost like an Australian.”
Mark Waugh on the defining moments from his majestic career

“I’m like, ‘Crikey, if I win the toss, can I bowl first with two seamers? I don’t think I can!’ So I walk out with my blazer on, very proud moment, win the toss, and rather sheepishly say we’re going to have a bat, thinking, ‘Oh God, please let the sun come out’. Dion Nash bowls us out for under 200.”
Mark Butcher remembers England’s bleak summer of 1999 when he briefly stood in as Test captain 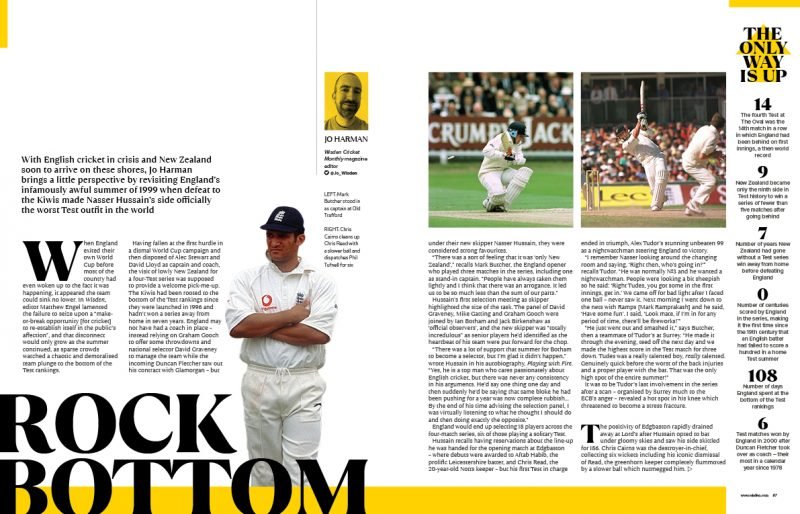 “I wish I’d just said, ‘Yeah, put me on’. To be able to say I’d played in the UEFA Cup would have been something pretty special. At that point Blackburn were still a reasonably strong Premier League team and I had the chance to play with people like Tugay and Benny McCarthy.”
Hampshire’s evergreen all-rounder Keith Barker looks back on his transition from football to cricket

“Athers didn’t hold back as he strapped his pads on before our first innings. He gave Devon a roasting.”
Steve Rhodes recalls keeping wicket to Devon Malcolm on the day the fast bowler made history 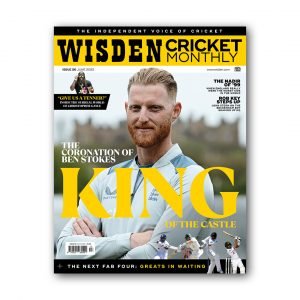