In the latest issue of Wisden Cricket Monthly, out December 16, we reflect on a watershed month for English cricket, when the game was forced to confront its own reflection.

In a 12-page special feature on the racism scandal which has engulfed cricket, Taha Hashim – whose interview with Azeem Rafiq in August 2020 sparked a chain of events which led to last month’s explosive DCMS hearing – examines how we reached this point. The Yorkshire-based academic Duncan Stone considers the wider landscape in the county, while acclaimed author Adam Rutherford writes that outdated notions of race are still the norm in English cricket.

Elsewhere in the magazine, we’ve got the Ashes covered as Dawid Malan speaks to Phil Walker about trying to block out the noise and nail down the No.3 position, James Wallace looks back at the painful recent history of English spinners in Australia, and Greg Chappell tells John Stern he’d rather spend time with David Warner than some of the more “squeaky clean” figures in the game.

Jo Harman investigates the worrying issue of concussion in cricket, exploring whether the game needs to adapt to protect its long-term future, Misbah-ul-Haq talks Saj Sadiq through a career like no other, and Kate Cross tells us she’s never felt more comfortable as an England cricketer after taking on the “Liam Plunkett role”.

As for our columnists, Lawrence Booth questions whether Eoin Morgan, England’s white-ball captain, is still worth his place in the side, Andrew Miller says the Vaughan supremacy is over, Adam Collins analyses Tim Paine’s demise and Pat Cummins’ coronation, and Neil Manthorp argues that AB de Villiers’ career was unfulfilled. To round things off, the inimitable Andy Zaltzman takes the deepest of dives into the number 22.

“Azeem Rafiq was and is far from a perfect human being, but that shouldn’t cloud the overarching message. His overriding legacy was sealed the moment he sat down and began talking in Westminster, because his testimony has sent English cricket on a path of course correction.”
Taha Hashim considers the impact and legacy of Azeem Rafiq 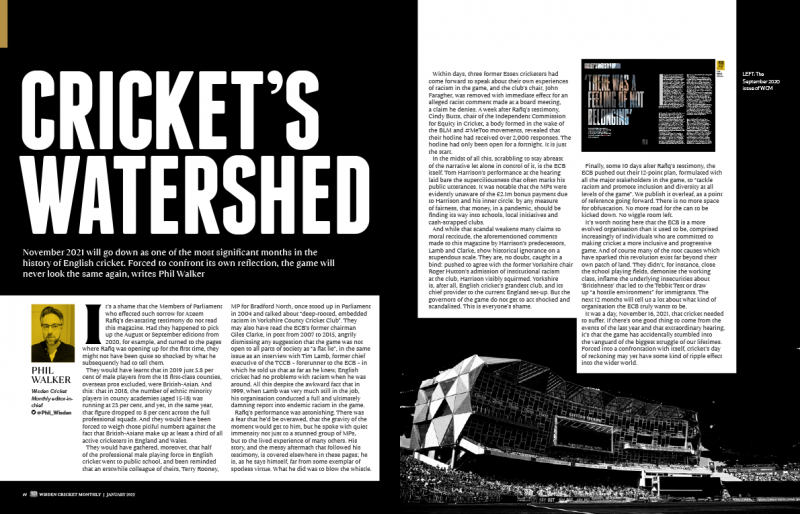 “When Gary Ballance called Rafiq the P-word he was unwittingly utilising hundreds of years of racism as a weapon of power. Maybe he believes he is not a fundamentally racist man, but by using racist language in this way he reinforces the pillars that prop up the racial hierarchies of society.”
Adam Rutherford, author of How to Argue with a Racist, on the language of race

“I decided that if it’s there to hit, I’m gonna hit it. And if I don’t get a score, so be it. But I’d rather give myself the best chance by playing the way I play, and if I’m not good enough then at least I can walk away saying, you know what, I’ve been given 20 Tests, and I just wasn’t good enough.”
Dawid Malan speaks to Phil Walker about playing the game his way 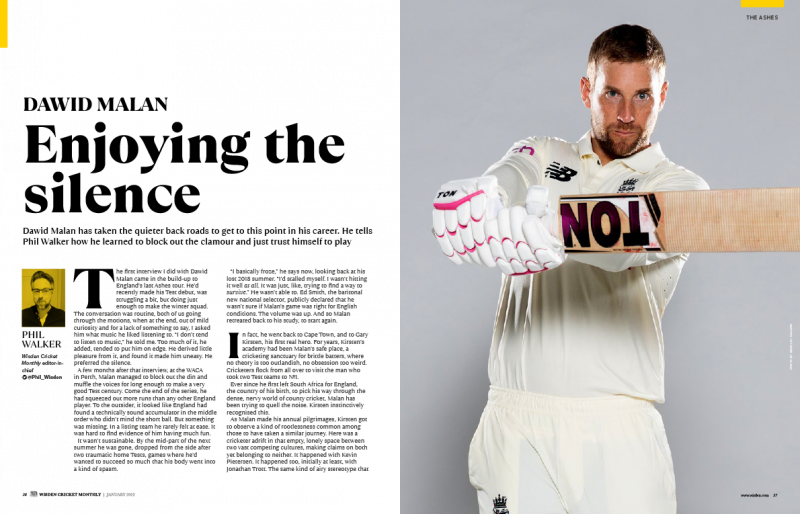 “Eoin Morgan remains razor-sharp tactically, and may still have it in him to win games with the bat. Yet a crucial shift is underway among those who watch him – a shift from expectation to hope. For international sportsmen of a certain age, there is rarely a way back.”
Lawrence Booth questions whether England’s run-shy white-ball skipper is worth his place in the side

“Ball-tampering has been going on since cocky was an egg – anyone that’s ever held a cricket ball has tampered with it at some stage. It just didn’t seem right for me that those two guys carried the can for a whole organisation that had failed to take their responsibilities.”
Greg Chappell sets the record straight on Sandpapergate 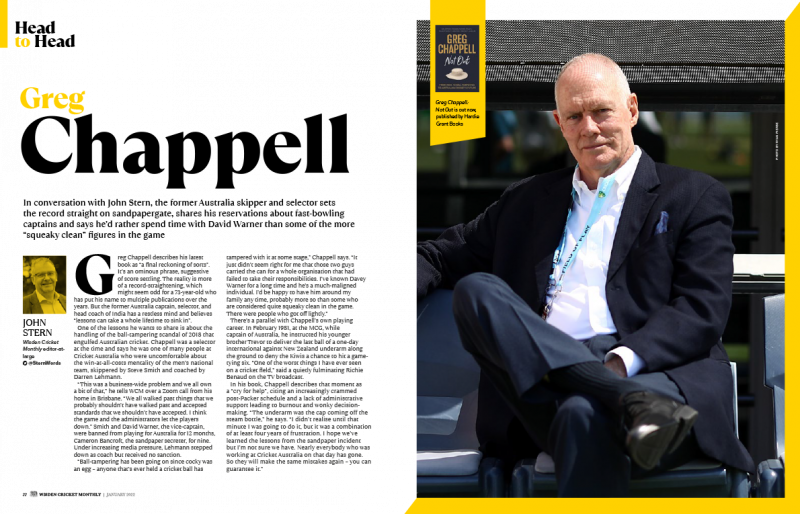 “From the outset of his punditry career, Vaughan has parked the admirable, thinking-man’s persona that made him England’s most cerebral leader since Mike Brearley, and traded instead in provocative, scattergun opinions as if he was cricket’s own version of Robbie Savage.”
Andrew Miller writes that while Michael Vaughan’s shock-jock persona has boosted his profile, it’s meant that sympathy has been in short supply for the former England skipper in the wake of Azeem Rafiq’s allegations

“The cases of Pucovski and Hosein are at the extreme end of the scale, but they are not freak occurrences. There is mounting evidence that cricket, like many other sports, has underestimated the frequency of concussions.”
As the issue of concussion in sport is brought into sharper focus, Jo Harman asks whether cricket will need to take action 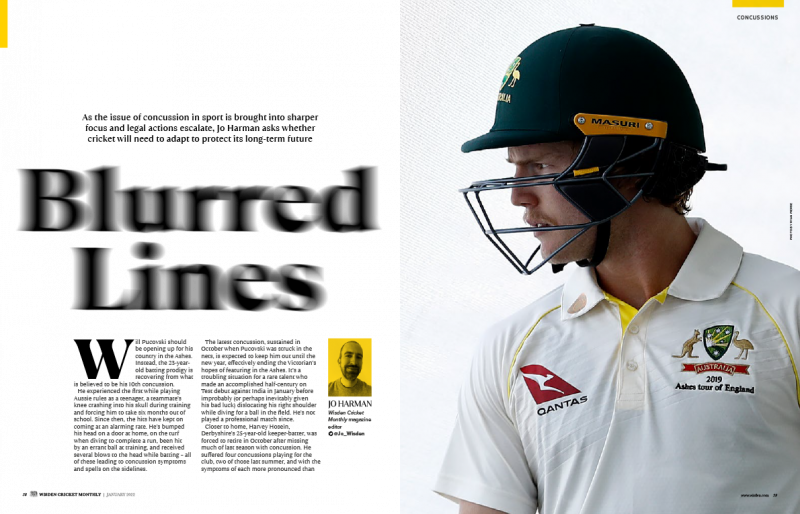 “For a cricketer whose career was coming to an end this summer anyway, it will be fascinating to see how long it takes for him to be rehabilitated and take his seat in the TV commentary box. Given the extent to which we Australians love a comeback narrative, I’m tipping the start of next summer.”
Adam Collins on the demise of Tim Paine’s captaincy

“After the spot-fixing saga, Pakistan cricket needed a lift and some stability. I’m really happy that whatever challenges were thrown our way, we met them head-on. At a pivotal moment we won back our fans, we gained respect, we got our dignity back as a cricket nation, we won over the people that we had lost during that dark time.”
Misbah-ul-Haq reflects on his extraordinary career 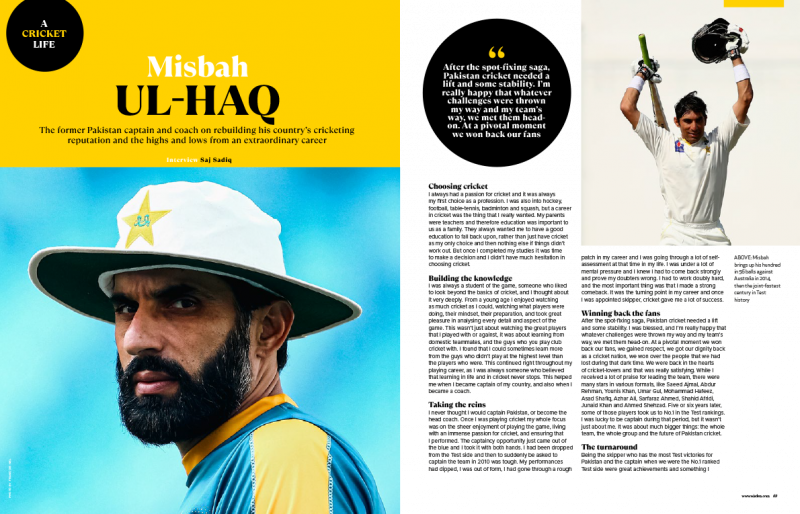 “We’re the least tech-savvy people you’d ever meet and when we started we were learning as we went. We uploaded a silent episode and didn’t even notice. It was 45 minutes of no noise.”
England seamer Kate Cross on co-hosting the No Balls podcast with her friend and teammate, Alex Hartley 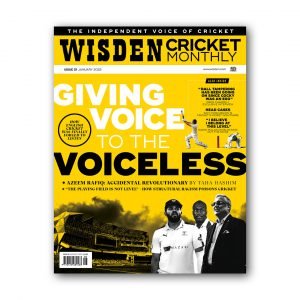