In the latest issue of Wisden Cricket Monthly, out October 14, we look ahead to the men’s T20 World Cup in the UAE and Oman and review an eventful summer of county cricket.

Ben Jones, CricViz analyst and author, opens our bumper World Cup preview by assessing England’s chances of winning the trophy. We also have exclusive interviews with West Indies skipper Kieron Pollard and Pakistani run-machine Mohammad Rizwan, as well as profiles of all 16 teams who are competing.

We’ve extended our County Files section this month, reflecting on the trials and tribulations of all 18 counties this summer, including in-depth features on Warwickshire and Kent, who walked away with the major pieces of silverware. There are also interviews with, among others, Leicestershire’s Callum Parkinson, Brad Wheal of Hampshire and Scotland, and Sussex opener Tom Haines, the Championship’s leading run-scorer.

Elsewhere, our roster of columnists address the most pressing issues affecting the game after a turbulent month: Andrew Miller writes on player power, Lawrence Booth on the wider impact of T20’s exponential growth, Adam Collins on the hoopla and hypocrisy that surrounds an Ashes series, and guest columnists Peter Oborne and Richard Heller tear into the ECB following their decision to cancel the tour of Pakistan, describing it as both shameful and predictable.

We also speak to John Crawley about the most significant moments in his run-laden career, Tymal Mills opens up on the bumpy road which has eventually led to World Cup selection, and Andy Zaltzman does a deep dive into the number zero in his mind-boggling column.

“Yeah, of course, over time I could have. I would not have been able to bowl 85mph plus, but in terms of playing that No.5 or No.6 role, which I used to play in first-class cricket for my country, then yes. I might have been the same even playing the longer format, using my strength and my power. Kieron Pollard would have been the same.”
Kieron Pollard tells Jo Harman he could have been West Indies’ Ben Stokes if his career had taken a different path 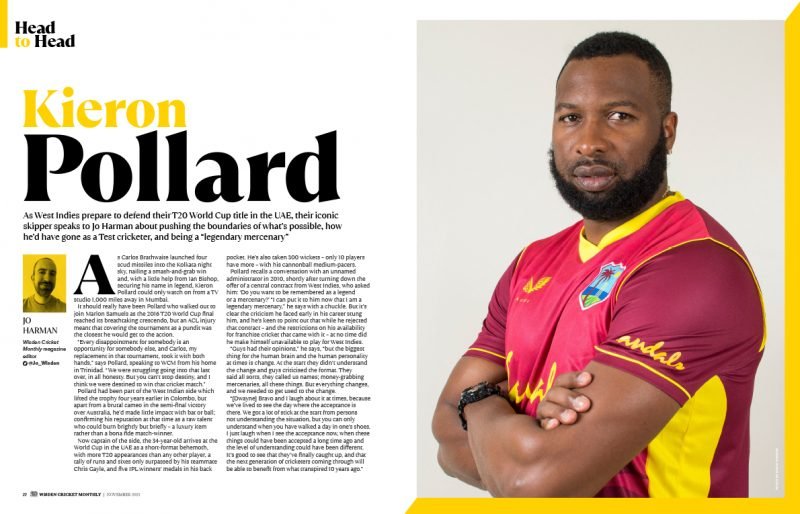 “It’s a bit late to start complaining about player power – some 45 years too late, really, given that the lessons that Kerry Packer doled out at World Series Cricket still hold true to this day. Without the players, there is no sport, and without the sport, there are no jobs to lose, or bonuses to misallocate.”
The term may have negative connotations, but ‘player power’ may be just what the game needs, argues Andrew Miller

“These days, T20 can feel like just another part of the endless culture wars. When India withdrew from the fifth Test at Old Trafford, it hardly seemed controversial to point out the link between their decision and the imminent resumption of the IPL. Yet those who suggested this were shouted down. They were dinosaurs. They were colonials. They were jealous.”
Lawrence Booth considers the impact T20 has had on the game’s overall landscape

“The next step for T20 is not to expend so much energy trying to win over its critics, but rather to feel comfortable in its own skin.”
Ben Jones, CricViz analyst, opens our T20 World Cup preview 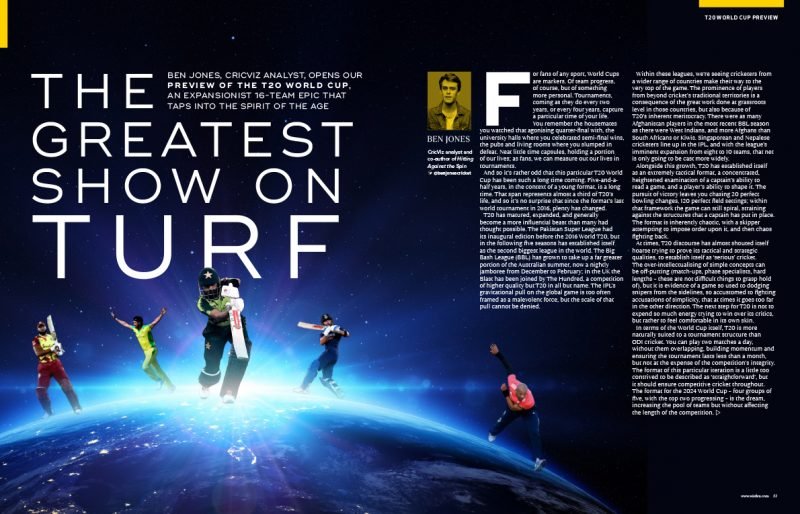 “Performative, excruciating, cringeworthy… it must be The Ashes War of Words, back for yet another season! Not even the crippling cruelty of a global pandemic is going to get in the way, so addicted has the series become to the ritual sideshow of trash talk every couple of years.”
Adam Collins, returning columnist for the Australian summer, argues that the on-field action in an Ashes series has increasingly become dominated by the hoopla which surrounds it

“At an exhibition match in Kabul in early September, the power of cricket was on show. Taliban fighters kept watch, as the new rulers signalled their support for the sport to continue. An AFP report described a full house. Hamid Shinwari, then the CEO of the Afghan Cricket Board (ACB), a role he was recently sacked from by the Taliban, described it as a match for “unity”. The Peace Defenders took on the Peace Heroes. However, there were no women in the crowd.”
Karunya Keshav reports on the start of a grim new chapter in the extraordinary story of Afghan cricket 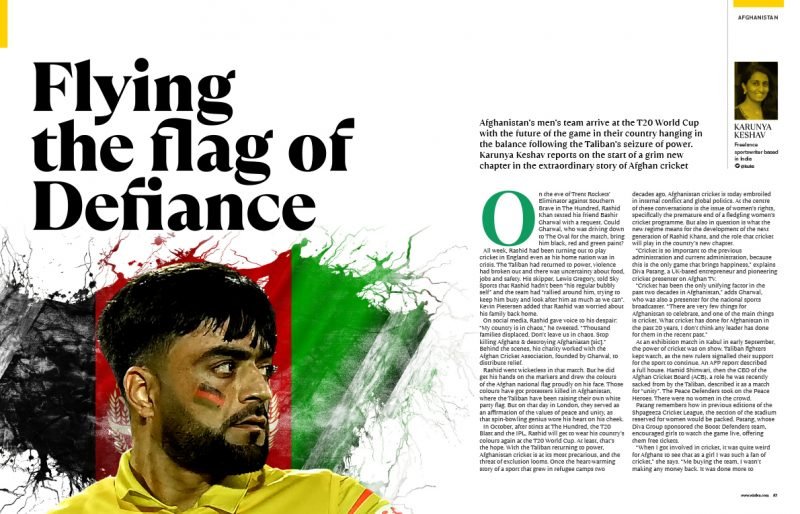 “The tours should have been a golden page in the history of England’s cricket relations with Pakistan. The cancellations turned back the page; they revived Pakistani memories of a long era of patronage and insult, when the best England players either refused to go to Pakistan or misbehaved when they did.”
Peter Oborne and Richard Heller consider the damage done by England’s withdrawal from their October tour of Pakistan

“Matt and I don’t really compare our stats. Normally he’s got the edge and in every article I’m ‘the brother of’, which is something I’m trying to shake!”
Leicestershire’s Callum Parkinson, the only English spinner to take 50 first-class wickets this season, on making a name for himself 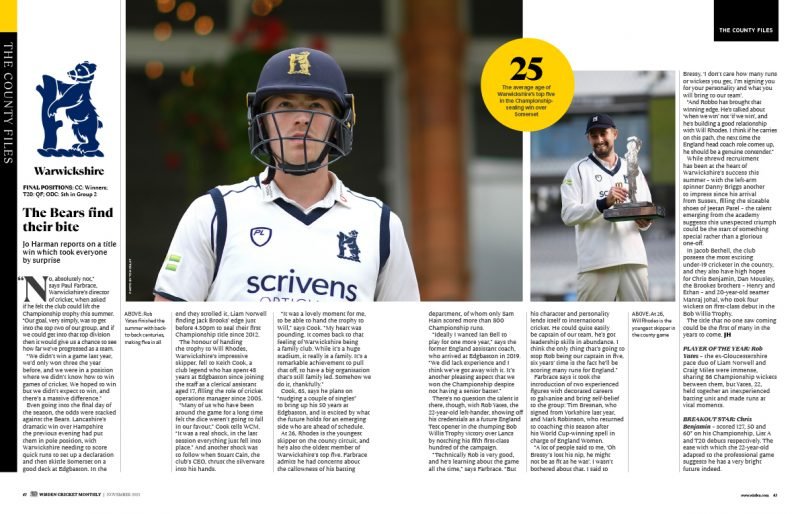 “I was somebody who people thought wasn’t good enough to play Test cricket, yet today I am the national vice-captain. Life is full of good and bad days, and I have had my fair share of the highs and lows already, but my mindset has been and always will be to remain positive and never let the bad times unsettle me.”
Pakistan keeper/batter Mohammad Rizwan speaks to Saj Sadiq about his years in the wilderness and the self-belief that has got him to this point

“Duncan [Fletcher] said, ‘You’ve got to get out there’. I said to him, ‘Fletch, I can’t even walk, never mind bat’. I got a sense then that he didn’t like that. I got the feeling that he didn’t quite believe or trust what I was saying and he made his mind up about me and my character.”
John Crawley tells James Wallace his face didn’t fit in Duncan Fletcher’s England set-up 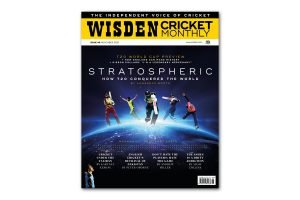