The reasons are many and the theories manifold and various, but one thing is irrefutable: batters in English cricket are scoring fewer first-class runs than they used to. In the latest issue of Wisden Cricket Monthly – out July 15 – WCM’s team of writers look to find out why in a special investigation.

Elsewhere, Jo Harman previews The Hundred, Andrew Miller derides the “vapidly awful PR” which has so blighted its gestation, the great Indian writer Suresh Menon produces a beautiful essay on the changing shapes and lines of Indian batsmanship, and Ellyse Perry sits down with Taha Hashim to discuss her extraordinary career.

As ever, we have all the big stories from another month of county cricket in ‘The County Files’, featuring interviews with George Garton, Keaton Jennings and Simon Harmer among many others.

“From a coach’s perspective, for the last 10 years you feel like a dinosaur for thinking that people with good techniques have got a far better chance of succeeding.”
Alan Butcher on English batting techniques 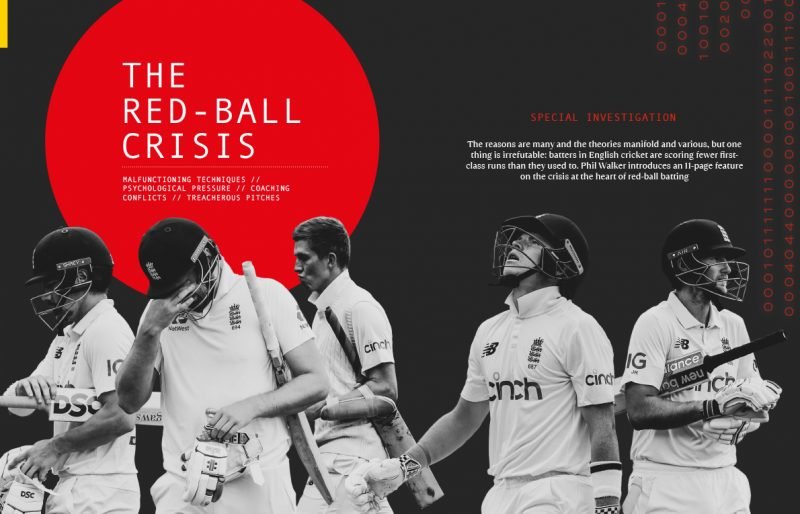 “People are getting battling 30s or 40s that are worth 60 or 70 on another day. That’s concerning to me because there’s no way England can move forward as a red-ball team if you’re talking about battling 30s or 40s.”
Middlesex (and England’s) John Simpson on batting in county cricket

“Things got even weirder with Southern Brave, who appeared to be identifying as a fortysomething singleton on a dating app: ‘Endlessly curious, with an insatiable appetite for adventure, what’s over the horizon?'”
Jo Harman tries to keep a straight face in his preview of The Hundred 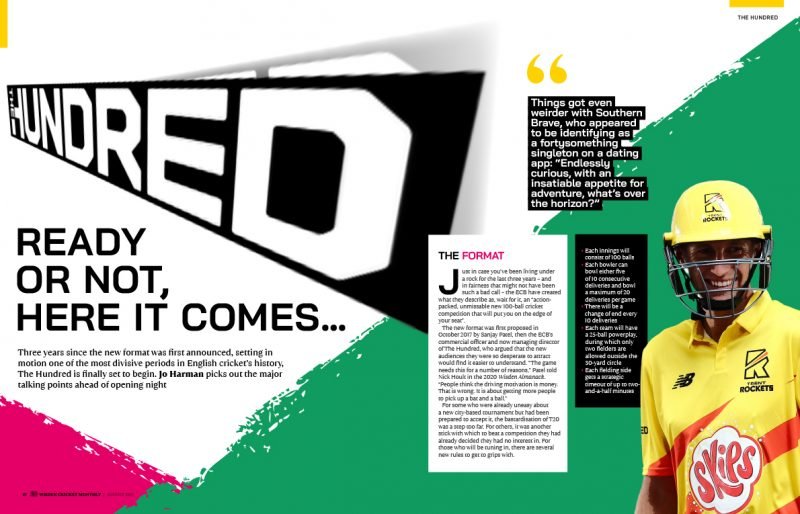 “I am outraged by the victim-shaming that the ECB has indulged in to bring The Hundred to this point, with its not-so-tacit inference that the sport’s existing fanbase of 50-plus white males is too old and flabby to be of any long-term relevance.”
Andrew Miller on the graceless way The Hundred has been foisted upon the game’s loyal fanbase

“The competition should have reverted to 40 overs per side, a format that was always popular with both fans and players. Shorter days could be pitched as a family-friendly day out, particularly for those who live in towns and cities where they can’t easily access The Hundred.”
Elizabeth Ammon considers the future of the domestic One-Day Cup

“It’s just evolved so much. And every year feels like a new challenge. You don’t feel like you’ve conquered anything or had any great success in anything because I think it’s a whole new landscape.”
Ellyse Perry on the revolution taking place in women’s cricket 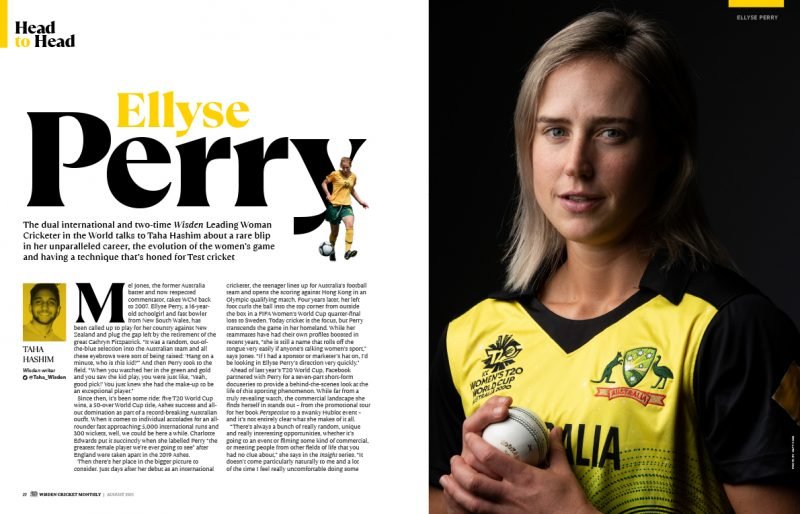 “My weight of runs speak for themselves.”
Sir Geoffrey picks himself in his all-time Yorkshire XI

“I’m either grafting away on game theory essays or the financialisation of the economy, or trying to hit cricket balls – so to keep half a mind on whether I’m going to be involved in Test cricket feels miles away.”
Keaton Jennings on enjoying his cricket again after a bruising time with England 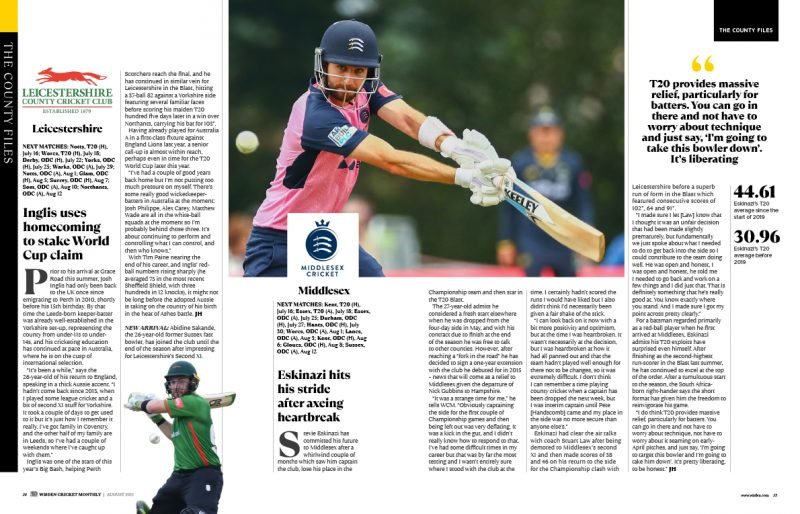 “As I read Why We Kneel, I began marking pages that contained examples and facts and name after name after name, until I saw that I’d marked almost every page. The relentless accrual of detail tracks a process of dehumanisation of the black race that stretches back way beyond slavery into the myths and iconography of the deep past.”
Jon Hotten on Michael Holding’s astonishing new book

“Kohli walked out to bat after Tendulkar had been dismissed in his final Test innings, and drove the first ball he faced to the boundary. The symbolism was inescapable. The king is dead, long live the king!”
Suresh Menon on the lineage of Indian batsmanship 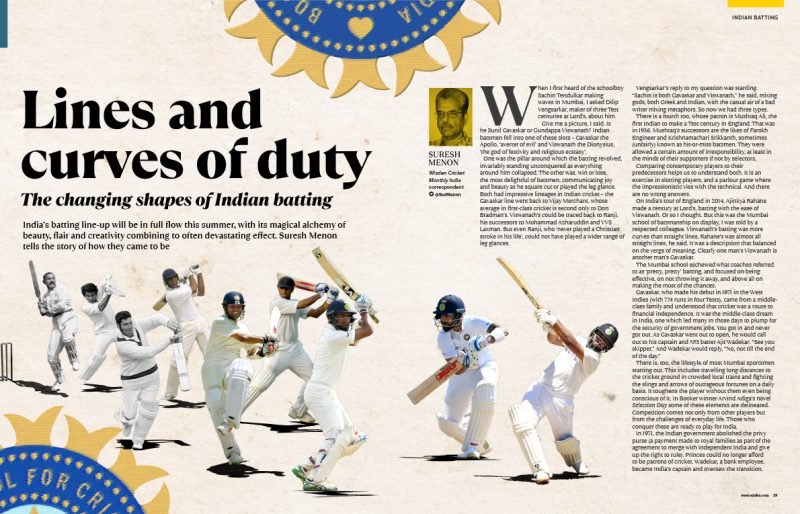 “In Trinidad in 1994, another altitudinous purveyor of parsimonious pace, Curtly Ambrose, was instrumental – in his 46th Test – in the high-speed demolition of England for 46, their second rubbishest Test total ever, and bringing about, would you believe, West Indies’ 46th Test victory against England.”
Andy Zaltzman on the number 46 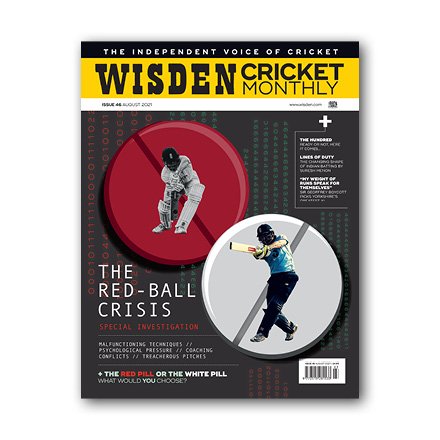