The latest issue of Wisden Cricket Monthly  – out February 25 – explores the stories of England’s black cricketers, hearing from, among others, Chris Lewis, Devon Malcolm, Ebony Rainford-Brent and Alex Tudor.

In a special edition to mark the 40th anniversary of Roland Butcher becoming England’s first black Test cricketer, Phil Walker looks at the impact Jofra Archer has had on English cricket and how the World Cup-winning fast bowler has been received by fans and the media.

Elsewhere, Jack Leach speaks to Jo Harman about a rollercoaster start to England’s Test series in India, Andy Flower talks to John Stern about the lessons he’s learnt across his extraordinary career, Andrew Alderson reveals the fine detail behind New Zealand’s stunning rise to the top of the Test tree, and Ted Dexter ushers in the Swinging Sixties in his ‘golden summer’.

There’s also opinion and analysis from our team of columnists, Isabelle Westbury, Andrew Miller, Adam Collins and Neil Manthorp, while Andy Zaltzman unpacks the significance of the number 28 in the latest instalment of his mind-boggling series.

“Over the next year, inside and outside the rope, Archer will need careful protection. He’s already given more to English cricket than it could have hoped for. He’s due something back in return.”
Phil Walker on Jofra Archer 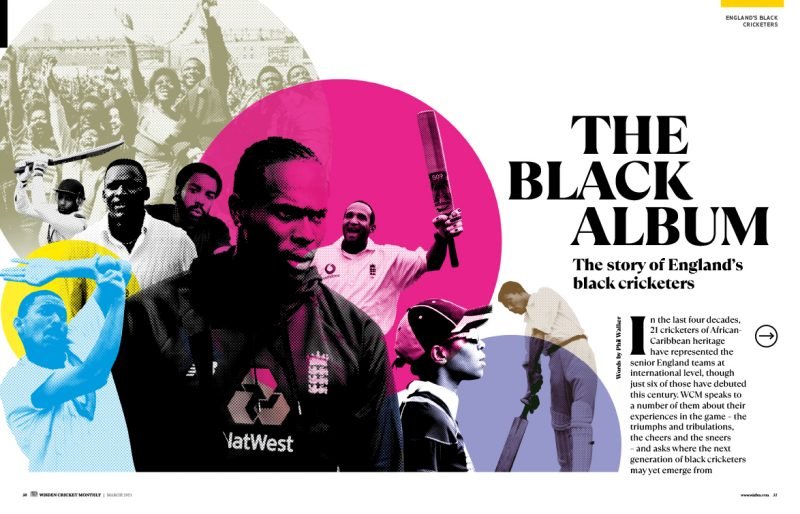 “He was more West Indian in his outlook, very laid back, took everything in his stride, but of course I couldn’t get away with that, because I wasn’t David Gower.”
Chris Lewis on being “an outsider” in English cricket

“Losing your place because of illness is hard because you’re not getting the opportunity, but when you’re actually getting the opportunity and everyone is watching you get whacked out of the park, that becomes quite a difficult situation.”
Jack Leach speaks to Jo Harman about bouncing back after being dispatched by Rishabh Pant 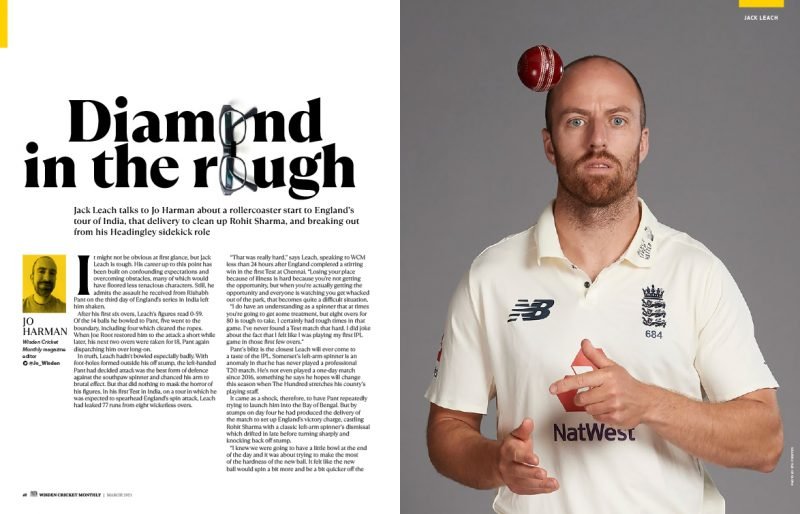 “I was playing at the highest level for my country and I couldn’t have wished for anything more, but then I threw it away. I made mistakes, I broke hearts, I upset my fans, but we all make mistakes in life.”
Mohammad Asif speaks to Saj Sadiq about the highs and dramatic lows in his turbulent career

“Maybe it’s slightly ironic that I’m now plying my trade in the franchise world and really enjoying it. At that time we thought continuing to prioritise Test cricket was the right thing.”
Andy Flower talks to John Stern about his new life on the T20 circuit 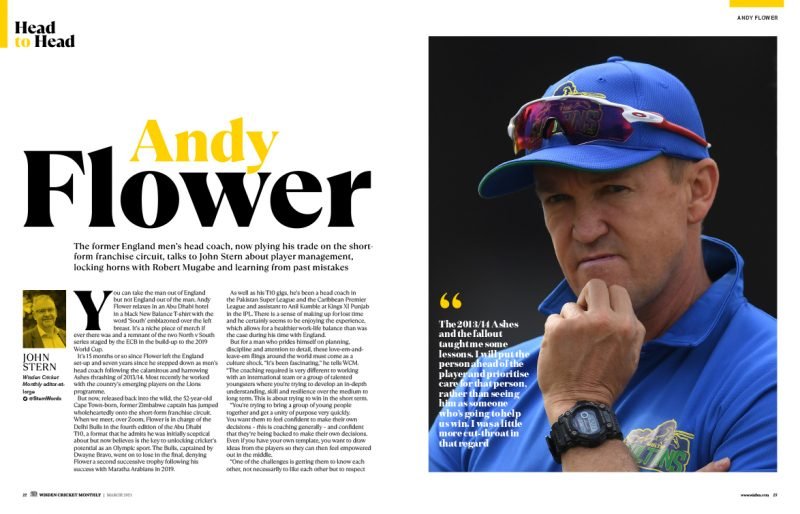 “While we all want good men in our lives, it’s not a key determinant in what makes a good cricketer. If you want being a good man to define your profession, join the third sector. Work your way up at the United Nations or train for a medical profession.”
Isabelle Westbury calls out the hypocrisy in letting ‘good blokeness’ influence selection

“It was a hard road to recalibrate what was important for us and those who support the team. If you were asked to write a manual for others to replicate, it’d be almost impossible.”
Brendon McCullum on New Zealand’s extraordinary rise to No.1 in the Test rankings 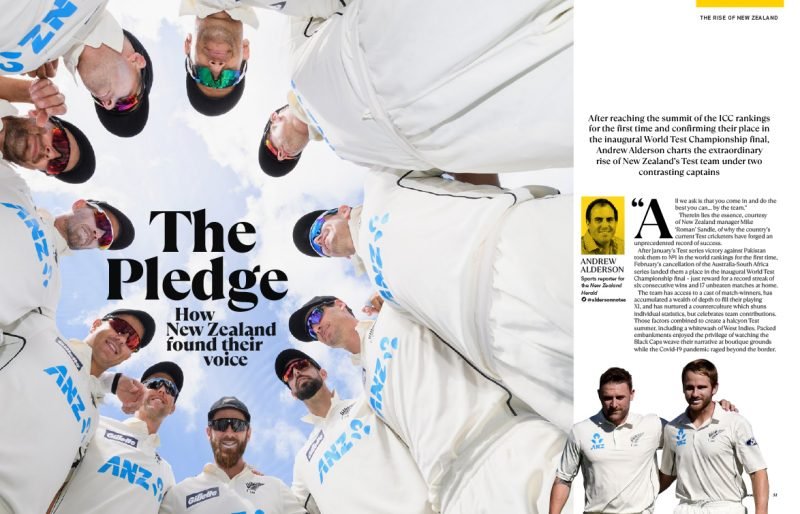 “Never discount how Justin Langer coveted this job after packing away his baggy green. This isn’t about holding the leadership baton for a turn before passing it on. All signs point to him wanting this gig longer-term.”
Adam Collins says that despite recent negative press and rumours of dressing-room unrest, Australia’s head coach is going nowhere

“I believe the people who understand cricket know the real story. The super passionate fans who are South African through and through will never get it. They see me as a coward.”
As county cricket bids farewell to Kolpaks, Kyle Abbott speaks to Daniel Gallan about the conflict that came with that title 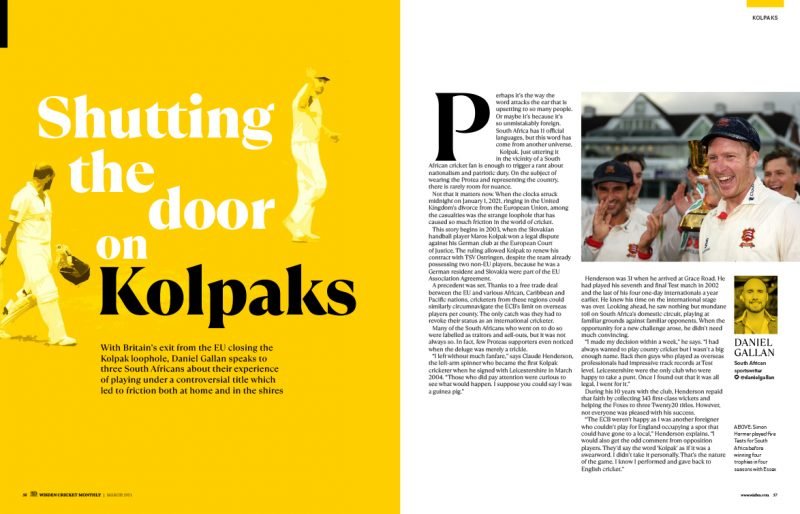 “I first saw Marcus Trescothick as a 15- or 16-year-old and he was one of the few people I could point a finger at and say, ‘He is going to play for England’.”
Brian Rose picks Somerset’s ‘Greatest XI’ 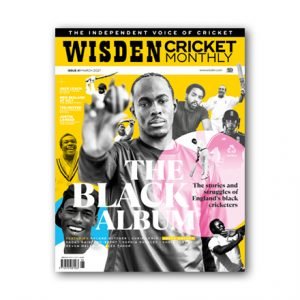