Moeen Ali takes the cover of the latest issue of Wisden Cricket Monthly – out June 25 – following his return to England’s Test squad after a year-long absence.

In a wide-ranging interview the all-rounder speaks to Taha Hashim about the impact media scrutiny has had on his performances, the diversity of the England dressing room and why sport and politics do mix.

We also have a special feature in association with CricViz, the world’s leading cricket analytics company, in which we reveal Test cricket’s MVPs of the 21st century, as well as picking out the most impactful players in the shorter formats.

We warm up for England’s showdown with the Windies with a series preview and a roundtable discussion featuring some of the most prominent voices in Caribbean cricket on the challenges the game faces in the region, before John Stern considers the effect that playing behind closed doors could have on the action.

Elsewhere, Zafar Ansari returns as a columnist, Elizabeth Ammon asks whether the global pandemic could spell the end for the 18 first-class county system, Mark Ramprakash reflects on his compelling career and Jack Russell puts on his selector’s hat to pick his all-time Gloucestershire XI.

“You have that old saying that politics and sports don’t mix, which I’ve never quite understood because there’s politics in sport. I’ve always been against that saying.”
Moeen Ali tells Taha Hashim that sportspeople should “use their platform” 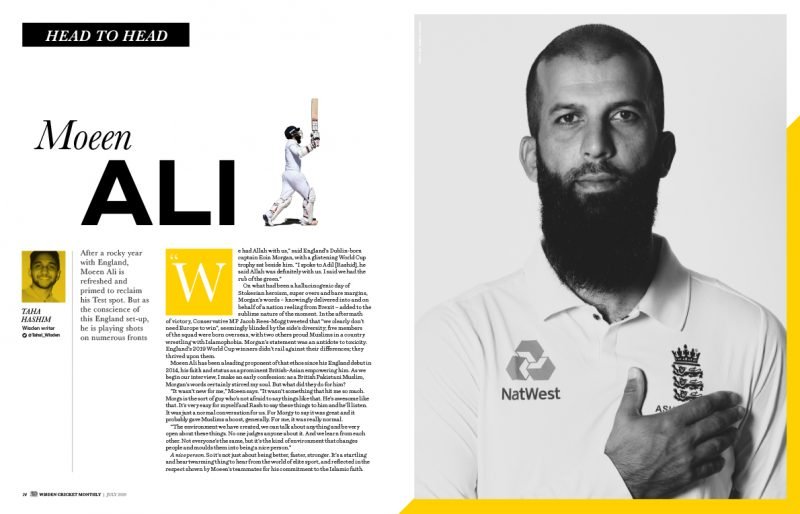 “His hat-trick at Southampton in ’77  is like our Kennedy moment. ‘Where were you when Procter took that hat-trick?’ He finished in 1981, the year before I properly started, and I’d see him around the ground but I never spoke to him – he was too much of a legend and I was just a grubby-haired school kid.”
Jack Russell selects Mike Procter as his captain in Gloucestershire’s ‘Greatest XI’

“There may be more ‘impactful’ cricketers in this list, but going by accumulated effectiveness, the don of the weekly grind is out on his own. No other Test cricketer this century has influenced as many moments, but the perfectionist was almost too good – an easy cricketer to revere, but a trickier one to love.”
Jacques Kallis is ranked at No.7 in CricViz’s investigation into the most valuable Test cricketers of the century 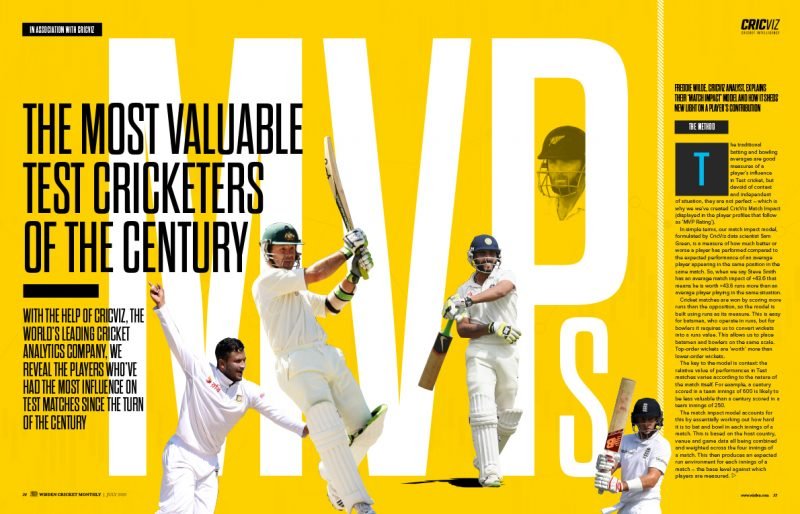 “There is a sense from the majority that the minority are, as one county executive put it to me, “holding us back”. It seems the mood music is changing amongst the county network.”
Columnist Elizabeth Ammon considers whether the 18 first-class county model is sustainable in the current economic climate

“That team were symbols of strength and hope to black people. I always felt empowered when I wore the shirt, I wanted to represent the region with pride. But we also wanted to create our own legacy. In T20 cricket we found a format in which we could be great again.”
Daren Sammy, the two-time World T20-winning captain, on the identify of the West Indies side 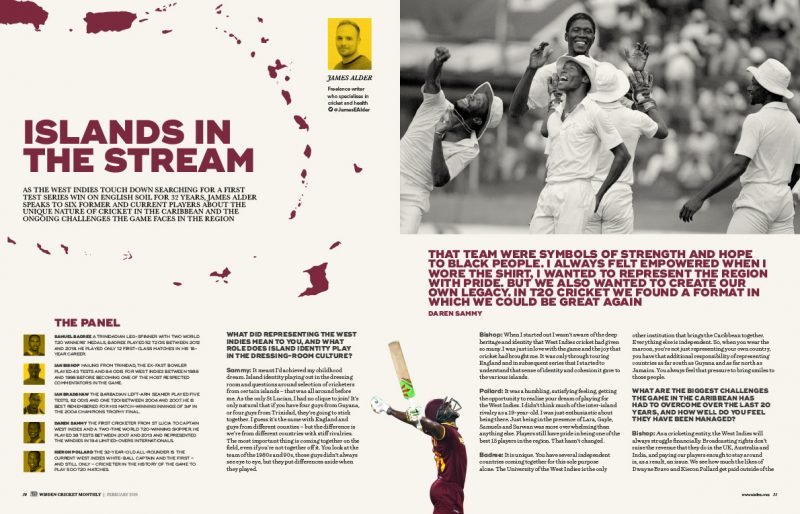 “If some players, like Liam Plunkett, can accept this snub with a shrug, knowing that their time was already up, others – not least Jamie Porter – must be feeling pretty damned sore. Was his 12th-man stint against India in 2018 simply window-dressing?”
Columnist Andrew Miller says England’s 55-man training squad has left no room for wishful thinking when it comes to those who’ve missed the cut

“I remember Alan Knott said to me you should play every game as though it’s your last, and that brought the best out of him. But for me it was the opposite. At Middlesex and Surrey I knew I was in the team, I felt relaxed and I could go out and play my game knowing that people had confidence in me and I was backed.”
Mark Ramprakash on the peaks and troughs of his career 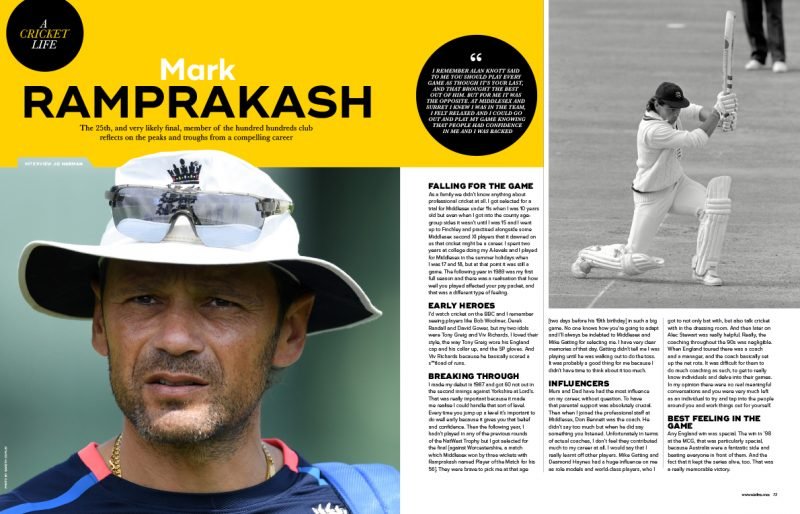 “It’s over a year now since Ashley Giles – nominally Morgan’s boss – insisted that Hales would still, post-ban, be offered the support to help him “fulfil his potential as a professional cricketer”. That ship may have sailed on Hales’ own steam: he can never be fulfilled by the game now. But keeping him indefinitely moored, deprived of a chance to do his job and make amends, seems to me a cruel punishment overlaid on top of a fair one.”
Phil Walker argues that Alex Hales, who missed out on England’s 55-strong training squad, has served his time

“When competitive juices are flowing, a crowd can accelerate the momentum. But it can have an equally debilitating effect if you’re losing. Senior players might have to find their own fight, and for junior players who might have been intimidated by that ferocity of the crowd, it could be more of a level playing field.”
Jeremy Snape, former England spinner turned psychologist, speaks to John Stern about the effect the absence of spectators could have on the action when Test cricket resumes 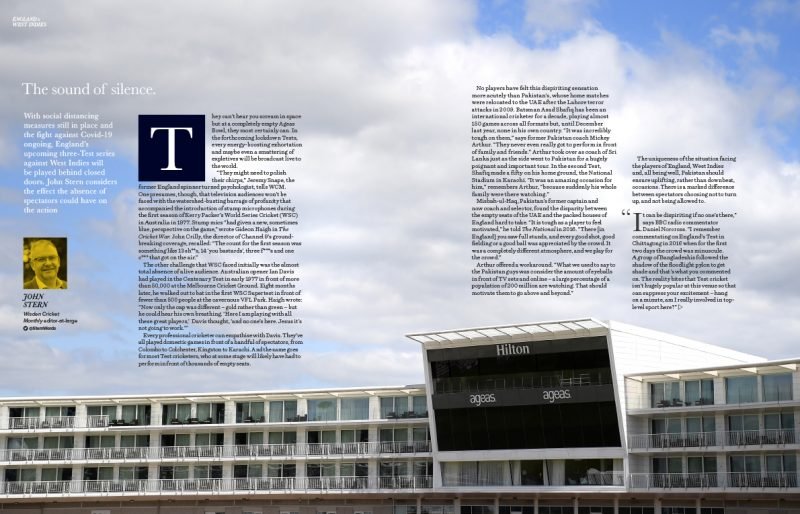 “We all celebrate suitably at The Circus Tavern on Portland Street. There’s only room in there for 12 of us really, so it’s crammed. There’s some locals in there already: Jerry, George the Greek, Jimmy the Weed pops in but leaves early. We took Nasser [Hussain] in there one night. He asked for a glass of water and the landlord, Barry, replied with, ‘We don’t do cocktails’.”
David ‘Bumble’ Lloyd imagines his perfect day at the cricket 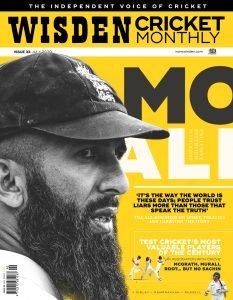