We asked a 30-strong panel of writers and broadcasters from across the world to pick the Wisden Cricket Monthly men’s Test team of the year. We present the results, alongside our women’s cross-format, men’s ODI and men’s T20 teams of the year, in our latest issue, out on December 28.

Elsewhere, we have exclusive interviews with Joe Denly, Monty Panesar and the king himself, Sir Vivian Richards, who talks us through the major signposts in his incomparable career.

We also welcome new columnist Andrew Miller to the team, who opens up by considering Jonny Bairstow’s future as a Test cricketer, while our Australia correspondent Adam Collins reflects on another extraordinary few months in the life and career of David Warner, Daniel Gallan looks at the rise, fall and return of South Africa’s golden generation and Rob Smyth takes us back to England’s seminal tour of the Rainbow Nation in 2004/05.

“Speak to batsmen who’ve faced Cummins since his return, and the verdict appears to be unanimous: no bowler is forever coming at you, both literally and figuratively, as relentlessly as Australia’s premier quick.”
Bharat Sundaresan profiles Pat Cummins, the world’s No.1 Test bowler and a unanimous pick in WCM’s men’s Test team of the year 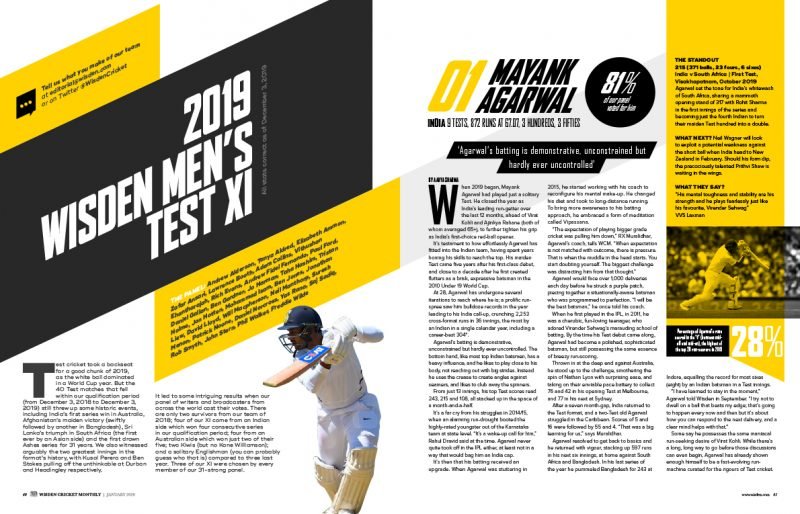 “With the sudden, jarring death of Bob Willis, at the age of 70, the English game has lost a towering presence. Cricket is a smaller, quieter, less interesting place for his absence.”
Phil Walker pays tribute to Bob Willis

“I wanted to be the top run-scorer in the country so I tried to change my grip a little bit, which was probably one of the worst things I’ve ever done for my batting. Come the season I’d literally forgotten how to hold a cricket bat.”
Joe Denly speaks to Jo Harman about overcoming the batting yips, seizing the chance he thought had passed him by and what it feels like to drop ‘the easiest catch in Test history’ 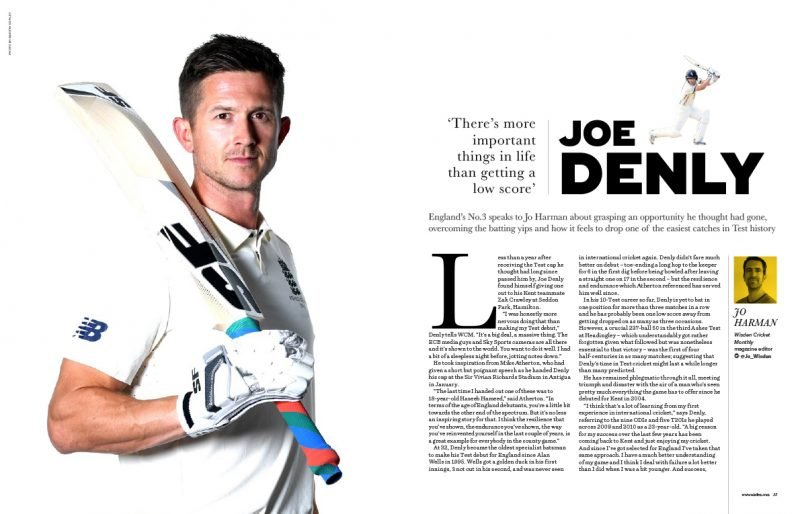 “Before long he became jealous, possessive, growly… and utterly determined. On the increasingly frequent occasions when he got to the ball before me, a drooly tug of war would ensue. ‘You’re not getting this back’ was the message being transmitted from every quiver of his deadlocked jawline.”
New columnist Andrew Miller sees similarities between Jonny Bairstow and his old springer spaniel Jaldi

“That’s what excites about Monty, he’s so many colours. If you spend a day with Monty, you experience different colours with him. And after it, you think, ‘Wow, what a fun day that was!’”
Monty Panesar lets Phil Walker into his world 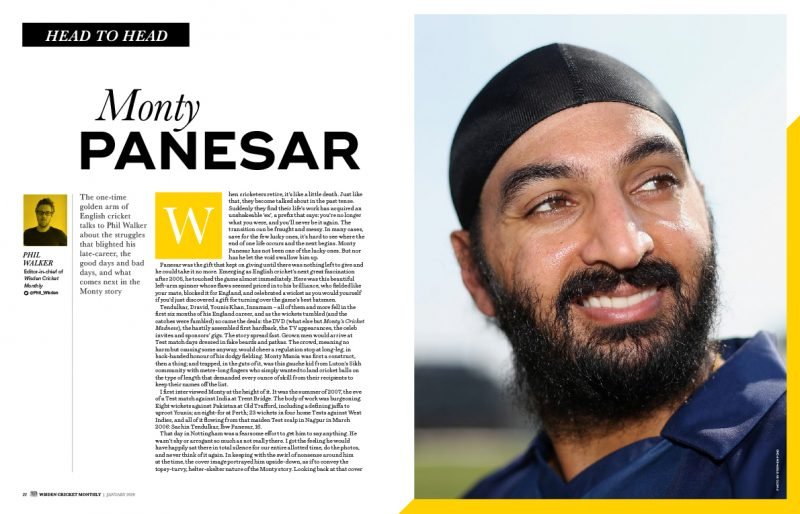 “The forgiveness threshold might be low but, even so, this has been a swift about-turn. Warner didn’t feature in Cricket Australia’s generic branding ahead of this summer. A month on, he’s the frontman.”
Adam Collins on David Warner, the most indestructible cricketer on the planet

“I don’t think I was ready for 90,000 people in Kolkata. This was more people than where I lived! It was a huge awakening. I wanted to make sure that what people saw would live with them for a long period of time. I thought, ‘Viv, you’ve got to get your act together’.”
Sir Vivian Richards on the moments that made him the most box-office cricketer the game has seen 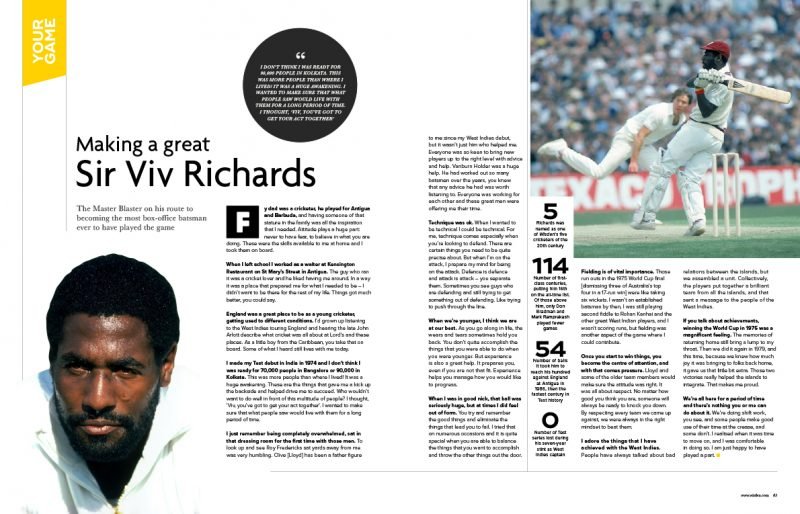 “No press room to hide away in, no mobile phones, just the radio car or a pay phone on the ground for live reports. Carrying my trusty reel-to-reel Uher tape-recorder for post-play interviews, which were frequently disrupted by laddish banter from the non-interviewees. I got used to it, and the Shropshire players got used to me, but that wasn’t the case with all visiting teams.”
Eleanor Oldroyd recalls an idyllic summer on the Shropshire beat and her experience of being “a woman in a man’s world” in ‘My Golden Summer’

“The only bowler in full health was Matthew Hoggard, the man whose role was usually to sweep the shop floor. On that magical day in Johannesburg, Hoggard was the team leader, the president and the CEO.”
Rob Smyth looks back on England’s triumphant tour of South Africa in 2004/05, a victory which set the tone for the extraordinary summer that followed 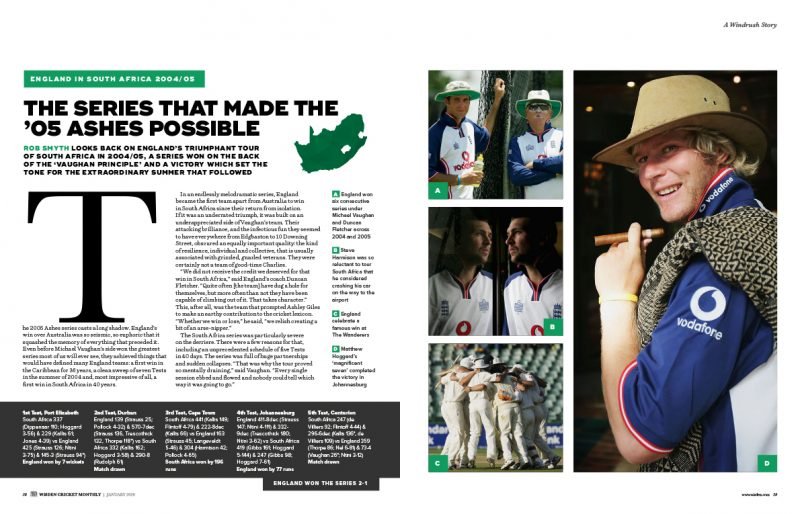 “I’ll tell you someone who loves cricket, and you won’t believe this – Didi Hamann! He’s an aficionado. Absolutely loves it. If there was a lull in play we’d argue about Everton and Liverpool. And Didi does like a bit of Chablis as well.”
Peter Reid, the former England footballer and Sunderland boss, settles down at Lord’s with a fellow midfield general to watch the old enemy do battle in ‘My Perfect Day At The Cricket’ 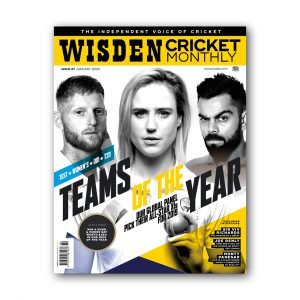