In the first of a new series covering the Australian summer, Adam Collins marks the start of the Sheffield Shield season by meeting the most dedicated group of fans in the country. They weren’t hard to find.

In most cultures, it’s the seasons that are typically used to define the rhythms of the year. In Melbourne, we prefer to deal in months. September, footy finals. April, the comedy festival. January, tennis. In November, it’s horse racing. But also – for those who savour the finer points of our game – it’s when the Sheffield Shield glistens. It’s in this window, before the international caper prevails, when discussion of the four-day competition reaches its zenith as scorecards are scoured in an attempt to pick the perfect XI for the Gabba Test.

Yet, despite the esteem the competition is held in – and the volume of clicks it generates – it is now rarely an event that people attend in the flesh. When attendances are, occasionally, formally recorded, they infrequently reach 500. This disconnect is no better highlighted than when the Shield moves to the biggest cricket ground in all the world. Our pride and joy – ‘The G’. 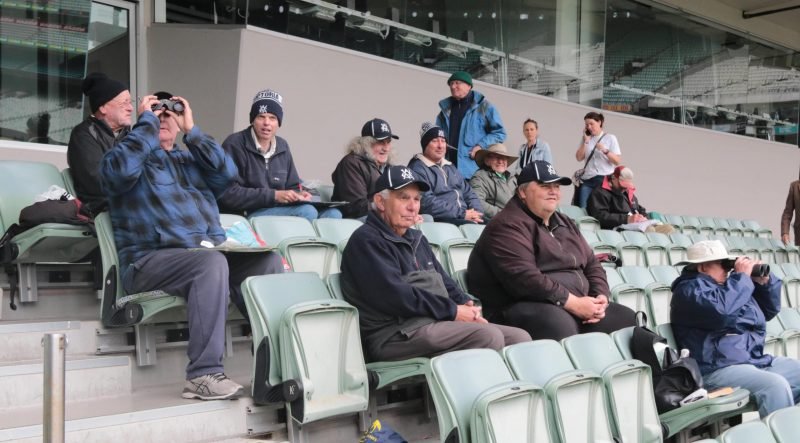 The Purists at work

After the season opener at the boutique Junction Oval, Victoria hosted Queensland at the Melbourne Cricket Ground, a thrilling fixture won by the visitors in the penultimate over. But forget about that. The story I want to tell you is about the group who are always present – the most loyal Victorian fans that have ever been.

There was never any doubting where they would be when I showed up for the second morning of the match with the mission of learning their story. Since I first started wagging school as a 14-year-old to watch the Vics with my scorebook, this was the one group who were there with their pens out too, self-styled as The Purists. Led by Robert Keystone, in those days wearing distinctive blue cap from generations past, were a disparate band of six or 10 or maybe 14 on a good day, found as close to behind the arm as they had been permitted.

It started gradually, Robert explains. He first arrived in the big smoke from Wodonga – the town where Victoria becomes New South Wales some three hours’ drive north-east – to attend university in the mid-1980s. Initially pulling up in the old Southern Stand, replaced in 1991, he found his spot and his people. Soon, Gary and Neville and Leigh joined him – the “founding members” of the gang. In a very Melbourne way, the cricket group became a football one in the colder months.

There’s no WhatsApp group – not even close. They barely see each other outside of the hours of play. “We social media in person!” Robert insists. A softer-spoken member adds that in the absence of children to look after, this is what they cherish. But they don’t need to make plans. That’s done for them when the season schedule comes out. “The biggest thing,” Robert continues, “is everyone always knows where to go.” The Cheers bar without the booze.

There are rules. Nobody is to sit in a seat directly next to someone. Nor should anyone position themselves directly in front of another. “We do it properly,” says Robert. But this goes further. Just as Omar in The Wire argued that everyone has to have a code to live by, our protagonist does too. A strict one. One of my most enduring memories of sitting with the gang in my university years is when the skipper of The Purists – as committed as they come – left the ground with Victoria three wickets from the title in 2004, their first for 13 years. Robert departed because the Australians were starting a Test in Sri Lanka – he had to be home to score that. This quirky hierarchy remains on clash days. “I just tend to stick to the system.”

Every scorecard has been catalogued in scrapbooks from the “hundreds” of games Robert, a former industrial chemist, has now attended. When he was working, sorting out his annual leave was easy – all taken for home games. Occasionally a road trip interstate swelled the tally. “Half the reason I stay in Melbourne is the cricket and the footy.”

The passion extends to grade cricket as well, which Robert attends whenever he isn’t otherwise occupied with Australia or Victoria. His team is Richmond, the club of Victoria’s 17-year-old debutant Jake Fraser-McGurk. “He’s one of ours,” he reflects with pride as the young man strokes a feisty half-century. As was former Test seamer-turned-umpire Paul Reiffel, who led the state team after his international journey ended. “He probably thought I stalked him for most of his career.” An anecdote follows about the day where his intervention from the stands prompted a change in approach from an opposition bowler, causing a dismissal the next ball. “That didn’t go over well with him! He turned around and gave me a nice serve. Thank you very much!”

Related Story: Who is Jack Wildermuth?

The highlight? Victoria’s Shield triumph in 1991 – specifically, the monster partnership between Wayne N Phillips and Jamie Siddons that made it possible. It remains a point of annoyance that Robert didn’t quite catch all of it – inclement weather that morning prompted him to watch a half of football before returning to the MCG. “I’m very much a purist in the sense that you have to follow the cricket from October until the end of March and then footy comes in from the start of April until September.” As always, respecting that code.

Asked to sum up why this band of diehards works so well, Robert’s answer is simple: “We just share the same love of the game.” His modesty prevails when asked if they are the most dedicated Shield fans in the nation, but they are. Two decades ago, one newspaper profiled the group and Robert Keystone wasn’t there – Australia were playing on TV – meaning his devotion has never been documented. It deserves to be. If you want to join the crew, you know where to find them: behind the bowler’s arm. They ain’t goin’ nowhere.