Kiwi commentator Ian Smith reflects on calling the final to end all finals.

“England have won the World Cup by the barest of margins.”

Eleven words that will echo through English sport for ever more, alongside Kenneth Wolstenholme’s: “They think it’s all over, it is now” from Wembley in 1966 and Ian Robertson’s: “Jonny Wilkinson drops for World Cup glory” from Sydney in 2003.

Kane Williamson was named Player of the Tournament and not many will argue against his compatriot Ian Smith being anointed as the unofficial TV commentator of the World Cup. Trusted with the biggest moments – and the Black Caps gave him plenty – the former Kiwi wicketkeeper hit the right areas every single time, finding that elusive mix of impassioned composure. 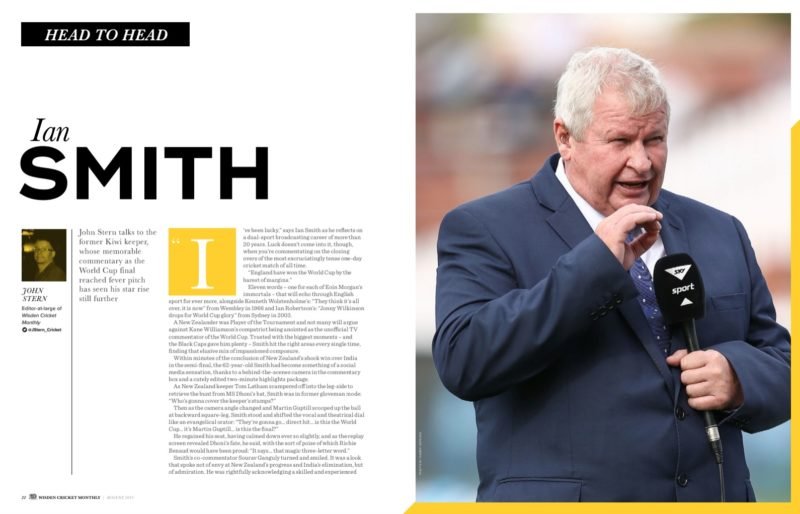 “My last commentary stint lasted an hour – it’s normally half that – but it flew by,” Smith tells John Stern in the August issue of Wisden Cricket Monthly, as he looks back on the head-spinning conclusion to that extraordinary final.

“I was trying to keep a lid on it because I wanted to get my head around all the scenarios. But I was caught up in the euphoria of it – I didn’t sit down for the last 15 minutes and nor did Nasser.”

Having had the best seat in the house for the final to end all finals, Smith is optimistic its impact will be felt in both New Zealand and England for many years to come.

“It has to be good for the game. If kids don’t want to pick up a cricket bat in New Zealand or England now, I’d be surprised and disappointed. If this doesn’t give the game in England a shot in the arm or a kick in the jacksie then I don’t quite know what will.”

Smith also praised Williamson, who he says has reached a new level of popularity in New Zealand after his run-scoring exploits at the World Cup and the dignity with which he handled the devastating nature of the defeat to England.

“Kane Williamson astonished me. He just grew and grew. He was highly respected back home already but he’s gone to another dimension, not just for cricket followers around the world but all sports followers in New Zealand. He’s an absolute hero now, no doubt about it.”

To read the Ian Smith interview in full, as well as Chris Woakes’ inside story of England’s World Cup campaign and a full Ashes preview, pick up a copy of the August issue of Wisden Cricket Monthly