Paul Farbrace believes that Eoin Morgan has been “England’s single biggest factor” in reversing their woes in limited-overs cricket over the last four years.

Morgan, England’s ODI and T20I captain, led the side in the 2015 Cricket World Cup, where they crashed out in the group stage after being defeated by Bangladesh. Since then, England’s 50-over fortunes have transformed rapidly, and they currently sit on top of the ODI rankings.

At the heart of England’s domination – they haven’t lost a bilateral ODI series since January 2017 – has been their high-powered approach with the bat. In 2016, their total of 444-3 against Pakistan broke a 10-year-old record for the highest-ever ODI total. They surpassed their own record last year, amassing 481-6 against Australia at Trent Bridge. 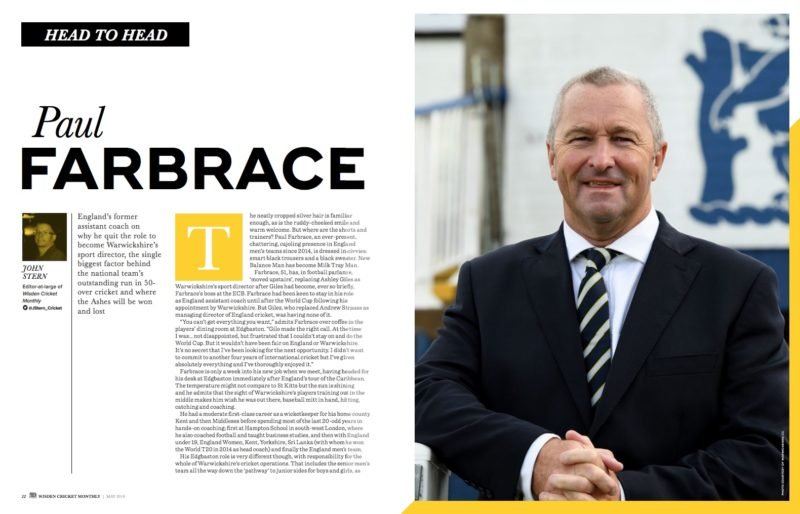 “They have the best white-ball captain in the world,” Farbrace says in the May issue of Wisden Cricket Monthly. “He is England’s single biggest factor. There are some fantastic players but Morgan holds everything together. What he said to the team here back in 2015 was that he wanted them to play the way that had got them selected and to take the positive option at every opportunity.

“It’s very easy as a captain to talk about the way it should be done but Morgs plays the way he speaks. That takes guts and skill. He’s never going to be consistent [as a batsman] because of the risks he takes. He’s a bit like London buses – just when you think he’s done nothing, he’ll suddenly play a couple of big innings.

“We talked about having no ceiling – let’s see how good we can be. We had an outline plan of how we wanted the team to be but we just kept telling the players ‘go and play, go and play’. Strauss, Trevor, Morgs and me met regularly and we started to drip-feed the plan and asking them what they felt. They started repeating back the things that we’d been dropping into them.”

To read the Paul Farbrace interview in full, and learn why he quit his role as England’s assistant coach, pick up a copy of issue 19 of Wisden Cricket Monthly.