In issue 29 of Wisden Cricket Monthly, Jo Harman profiles the 19 most exciting teenagers in the UK after canvassing opinion from coaches and players across the length and breadth of the country. The list includes Gloucestershire’s Ben Charlesworth, a 19-year-old left-handed opener with an old-school approach.

When speaking to academy coaches around the circuit, no name came up more regularly, or was delivered with more conviction, than Ben Charlesworth. “A genuine old-school opening batsman,” said one, noting echoes of Alastair Cook in his temperament. “Correct, organised, knows where his off stump is – he has all the ingredients to have a successful career,” said another.

Charlesworth also caught the eye of Ian Bishop and Tom Moody at the recent Under 19 World Cup, where he scored a composed 82 against Australia before a broken knuckle ended his tournament. “There’s something about Ben Charlesworth,” tweeted Bishop after the match. 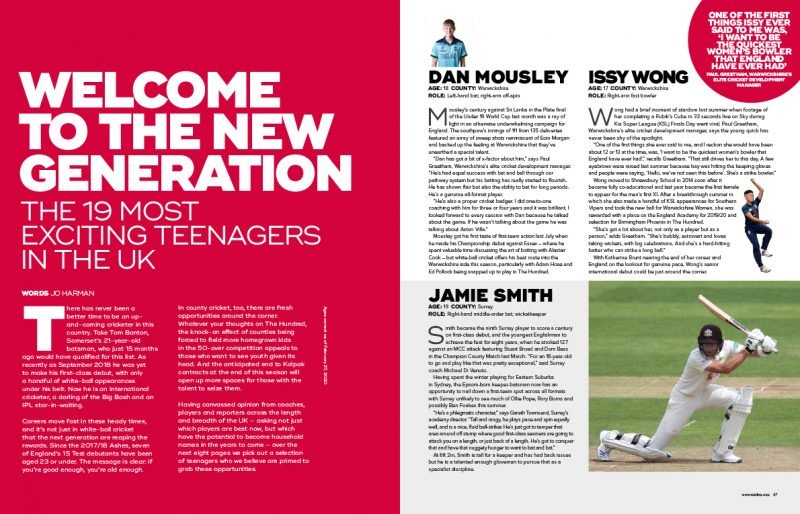 A tall left-hander who made his first-class debut at the age of 17, Charlesworth initially broke into the Gloucestershire team as a seam-bowling all-rounder. He already has three fifties from 11 matches in the middle order but it’s up top where his future lies. Not since Jon Lewis in 2006 have Gloucestershire had an England Test cricketer. Wise heads believe that Charlesworth, a traditional opener at a time when they’re in short supply, could bring that long wait to an end.

Ben, how did it feel to hear ex-pros like Ian Bishop and Tom Moody sing your praises?

It lets you know you’re on the right path. It was probably the biggest stage that an under 19-year-old can play on: England v Australia on Sky Sports in a World Cup match, effectively a knockout game [which Australia won off the final ball, sending England into the Plate competition]. I wanted to step up and put in a performance for my team. But I don’t want the Under 19 World Cup to be where it ends. I want to push on and do bigger and better things.

How would you describe yourself as a player?

I’m a natural opening batter, who bowls right-arm seam. People have commented on my temperament, especially in red-ball cricket, and that’s probably one of my main strengths – building an innings and batting for long periods of time. That’s basically how I’ve made a career for myself to date. When I bat I just have this inner-determination to stay in and occupy the crease and try and get a score for the team. That’s what I’ve been doing since the age of 10 and it’s what I want to keep on doing.

What was your route to signing a contract with Gloucestershire?

I went to boarding school, at St Edward’s Oxford, and they had a link with Gloucestershire. I got on the Gloucestershire Academy when I was 14 and then signed my first professional contract when I was 17. Gloucestershire is a great club. They’ve been brilliant to me for the last five years. They’ve given me everything and I’m extremely grateful to them.

In Chris Dent you’re playing with one of the most experienced and consistent openers on the county circuit. Is he someone you seek out for advice?

Denty is massive for me. He’s the kind of player I want to be. He’s skilful, he can play really good white-ball knocks and the way he goes about his business in the County Championship is excellent. His numbers speak for themselves and it’s great to have someone like him to learn from. All the Gloucestershire lads think he’s been unlucky not to get a sniff in the England set-up.

You’ve batted in the middle order so far for Gloucestershire. Is establishing yourself as an opener your next target?

Yeah, 100 per cent. Our batting line-up is quite flexible so who knows how we could set up this year but I’ll be putting my name in the hat to open the batting. To be able to do that with Denty would be class.

What’s your ultimate ambition in the game?

I want to be a consistent member of the England Test side. My dream is to play in an Ashes Test match in Australia, on Boxing Day. That would be the pinnacle of my career.

Do you think that’s also true of your peers, or are some more focused on the white-ball route and the lure of T20 leagues around the world?

I think I’m not the norm in the way I go about my cricket. A lot of players are more interested in white-ball cricket and playing in franchise leagues around the world and earning money. It’s not to say that I don’t want to do that, but for me my highest ambition is to play Test cricket for England. For some players their ambition may be to go and play IPL. Everyone’s different.

To read ‘The 19 Most Exciting Teenagers in the UK’ in full, as well as a special feature on the lineage of English batsmanship and exclusive interviews with Misbah-ul-Haq and Makhaya Ntini, pick up a copy of issue 29 of Wisden Cricket Monthly 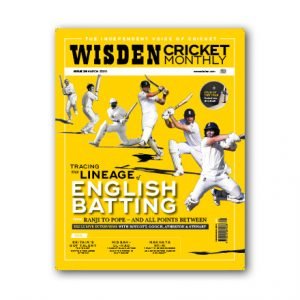