Kyle Jamieson was in the news recently after his refusal to bowl with the Dukes Ball to Virat Kohli in the Royal Challengers Bangalore nets during the IPL this year.

The upcoming World Test Championship Final between India and New Zealand will see some of the best cricketers face off against each other from June 18 in England. While the Indians will enter the game high on confidence after a stellar run in the Championship, including a series win in Australia, they will not find the going easy considering their troubles against the swinging ball of late.

The Final will be played with the Dukes balls, which New Zealand pacer Kyle Jamieson was carrying during the IPL. However, Jamieson had stated how he deflected a cheeky attempt from Kohli to get some early match practice at the RCB nets, after Dan Christian, during a chat with The Grade Cricketer, revealed a net conversation between the three. The former’s refusal is well understood as he was not willing to unleash his bag of skills and tricks ahead of the big clash between the two nations.

However, Kohli seems to have taken the incident in humor and picked him as a “very shy” cricketer when asked by his fans in a rare Question & Answer session that he hosted on Instagram on Saturday. He was also asked to name the funniest and the smartest cricketer in the RCB line-up, which saw him name Yuzvendra Chahal and AB de Villiers, respectively.

Jamieson had a fairytale debut and has been on a roll in international cricket of late. The lanky pacer was picked up for RCB based on his exploits and was a key member in the side before the tournament was suspended.

See Kohli and his answer about Kyle Jamieson 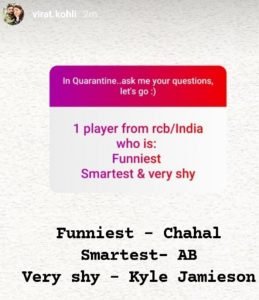