In the new issue of Wisden Cricket Monthly, England’s greatest No.3 of the modern era discusses retirement, his complex relationship with the game, the detrimental effect county cricket is having on long-form batsmanship and his “ridiculous” career highlights.

It’s that wistful late-September vibe, the season’s endpoint, and a fortnight on from an Oval farewell to rival Ziggy Stardust’s at Hammersmith, another scrapper from the old world prepares to take his leave.

Still, a nothing game at Edgbaston between a pair of already-promoted sides is not the final Test of a marquee series, and there’s only a handful in to see Kent’s fielders form a guard of honour leading to the pitch.

What a day. Can’t thank everyone at the club enough for all of the support over the years. A fitting way to end a career I’ve always been thankful for. Thank you @WarwickshireCCC https://t.co/Wf3BuQgPVH

Loping through it, shaking the skipper’s hand as he goes, Jonathan Trott heads to his favourite place, to dig out his trench one last time. And then, suddenly and far too quickly, it’s done. That trademark clump through mid-wicket has found for once a sprawling fieldsman, and the promise of one last session scratching away in the dirt falls away.

“You can only hit so many balls in life,” Trott would later tweet, “I think I’ve hit my fair share!” Still, in the moment, it feels like that Woody Allen joke about life being full of loneliness and misery and suffering, and it’s all over much too quickly. Another stint bolted-up in bathos: 8 from 13 balls. An old cricketer leaving the crease. Thanks for the memories, and what a career.

In an interview with John Stern in this month’s Wisden Cricket Monthly, Trott explains how he set out to be, among other things, “the best No.3 England have ever had”. And as Stern writes, despite the unsettling way his Test career ended after 52 matches, he has “a decent claim to that title”.

He is yet to be adequately replaced. Much of the tone of the Cook-reflections lingered on a sense that he was the last of the gang to go. With Trott now gone too, the past, and a certain attitude, one grounded in obstinance and pragmaticism, passes with them.

Trott talks of the old ways with a kind of religious fervour. “You don’t get draws any more [in county cricket],” he tells WCM. “I mean proper draws like 500 plays 500 plays 250-2. I think [those matches are] good for cricket in that they produce good cricketers. We had a good Test team off the back of some very flat wickets.”

Jonathan Trott’s final season deservedly ended in style with a ?. Here’s his thoughts on the promotion winning campaign and his next step.#ThanksTrotty ?#YouBears pic.twitter.com/Qvf7Zph9qr

Trott of course was the bulwark at first-drop in an era when English cricket found its Test team to be the best in the world. He was the man who came in for his debut in an Ashes decider and crafted a second-innings hundred. Who re-marked his guard after the innings had been declared at Melbourne, 168 not out. Who, no great fielder, threw down the stumps from square leg in the opening minutes at Adelaide to set Australia on the path to 2-3 and an innings defeat. The compiler of nine Test hundreds, two of them doubles; and the ODI oddity who averaged over 50 from 68 matches yet never quite convinced a malfunctioning set-up that he was the way to go.

As English cricket scouts around for someone, anyone, to bat time, to define themselves by the adhesiveness that attached Trott to Cook to Collingwood – and to countless names before – Trott is tempted to wonder if they’re still kicking around at all.

“As a batter you learn the art of batting for six or seven hours. As a bowler you learn how to take five-fors on flat wickets. I think the standard of wickets in first-class cricket is poor, not helped by when Championship cricket is played. Having no heavy roller is ridiculous. No toss is ridiculous. You see bowlers getting picked for taking 60 wickets on minefields.

Gonna miss this bloke! Great playing with you mate @trotty ! Great effort to win this year and to be back in Div 1! The hard work starts again next year. #YouBears #ThankYouTrotty @WarwickshireCCC pic.twitter.com/ELxNjmLoS3

“Where are the batsmen who average 40 in first-class cricket? In my era we had Joyce, Carberry, Compton, to a degree Hildreth. I remember guys getting 1,400 runs [in a season], now they are lucky to get 800. That’s also why we’re not producing any spinners. Hopefully a bit of sense comes back to the four-day stuff and it’s given its rightful emphasis and focus for the players and their abilities.”

As Stern writes, the end of Trott’s international career – in Barbados after an improbable recall to the Test side in 2015, following the darkest of times in Brisbane in 2013 – could scarcely have been more different to that enjoyed by Cook. But when the dust settles on Cook’s England career and he returns, as Trott did, to the county rank and file, the shift will take some getting used to.

“Once international cricket’s gone it takes a bit of adjusting,” he says. “You fight with the game a bit, you find your place within your county, you find your role again. It is tough going back to county cricket. You don’t have the crowd and the buzz. I fought with the game quite a lot, I was angry with cricket. But 2016 was decent, and 2017. I’m at peace with the game. A lot of people don’t get the chance to be at peace with cricket.”

That Trott leaves the scene serenely, packing up his immense numbers for his next challenge, is another heartening story from a curiously sentimental season. Few cricketers have cared so deeply, and given so much. And though the future is unmapped, Trott’s next challenge will very likely be within cricket – “I want to make a difference as a coach,” he tells Stern.

His reputation for straight-talking insightfulness would make him an attractive option, while the breadth of his personal experiences – the highs he reached, the lows he plumbed – will surely make him a persuasive one. Having made peace with a game that had come to dominate him, Trott’s next story is just getting going. 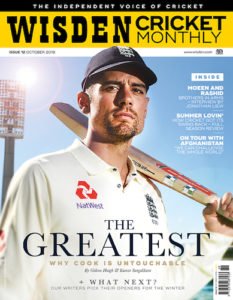 To read the full interview pick up the October issue of Wisden Cricket Monthly, or subscribe here