England fast bowler Mark Wood revealed of his speed-gun battle with teammate Jofra Archer, which was at its peak during the World Cup, and views the competition as motivation to bowl faster.

A key feature in England’s limited-overs setup, Wood was one of the unsung heroes of his team’s World Cup-winning campaign last year, where he bagged 18 wickets at 25.72. However, a side strain and a subsequent knee surgery has kept him out of the international setup after that epic World Cup final at Lord’s. 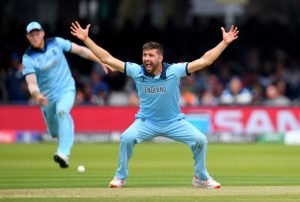 Now with James Anderson ruled out with injury, there is one spot vacant in the Test squad and Wood is hoping for a crack in the third Test against South Africa. Wood’s last Test appearance dates back to February 2019; the third Test of the West Indies tour in St. Lucia, where his five-for in the first innings – a result of his blinding speed as much as anything else – powered England to a consolation win after successive defeats.

He also quite fancies the idea of him and Jofra Archer operating in tandem, an exciting prospect and one that ignites a friendly rivalry.

"In the World Cup final, I knew that I'd pipped him."

“I do like the idea of the two of us operating together in a Test match,” Wood said in Port Elizabeth on Saturday, January 11. “As long as he’s not at mid-off asking me if I’m just warming up when I’ve bent my back. Playing alongside him did spur me on so maybe it will help. We have a friendly rivalry over the speed gun. In the World Cup when I put one up on the speed gun that was quite quick I’d just look over to Jofra and give him a little wink. Then he’d do the same to me.

“In the World Cup final, I knew that I’d pipped him,” he continued, reminiscing the memories of the classic encounter. “I was clocked at 95.7 mph and he was 95.6 mph and as we came off the field and into the dressing room I was dying to tell him.”

With Stuart Broad set to lead the attack and Sam Curran likely to hold his place after good performances so far, the 30-year-old Wood acknowledges that Chris Woakes and Archer are “ahead (of him) in the pecking order”, but is confident of himself delivering the goods if the opportunity presents itself, especially if it comes in the fourth Test.

“Johannesburg might suit me better. It is at altitude and it is a bit of a bouncier pitch. But Port Elizabeth does reverse swing so that could bring me to the fore. Hopefully I’ll be ready if needed.

“I have felt that if I get fit then there’s no reason why I can’t do that again. The St Lucia Test is lodged in my mind as one of the best days I’ve had. If I can replicate that I’ll be pretty happy.

“It’s not just potential now. I know I can perform. I know now I can deliver if called upon.”