In a clinical, all-round display, Rajasthan Royals defeated Sunrisers Hyderabad by seven wickets as the race for qualification spots got more intense.

In fact, with over three-fourths of the league stage completed, no team has yet been eliminated from the contest. Rajasthan looked down and out early in the tournament, but three wins from their last four matches have kept their hopes alive.

Despite the defeat, Sunrisers Hyderabad retained their place at No. 4 on the points table, thanks to a fantastic net run rate of 0.559, which is the highest among all teams. But their middle-order concerns showed no signs of abating.

Liam Livingstone departs after a well made 44.#RR 78/1 after 9.1 overs https://t.co/OEXxBLSdy9 pic.twitter.com/lqm2xIzOXd

Liam Livingstone. With Jos Buttler’s departure, Rajasthan had to find a quick fix at the top of the order. On Saturday, April 27, Livingstone showed just why he is the perfect candidate to open the innings.

He looked at ease throughout, and after taking a few balls to suss out the pace of the surface, started belting the ball to all parts. He was eventually dismissed by the wily Rashid Khan for a 26-ball 44, which featured four fours and three sixes, but by then had laid the foundation for Rajasthan to overhaul Hyderabad’s modest 160-8.

Livingstone has forged quite a reputation as a big-hitting opener in T20 cricket, and his firepower is exactly what Rajasthan need in the batting department, which includes more composed and naturally sedate batsman, such as Ajinkya Rahane and Steve Smith. If Livingstone can continue hitting the way he did, it will do Rajasthan a world of good. 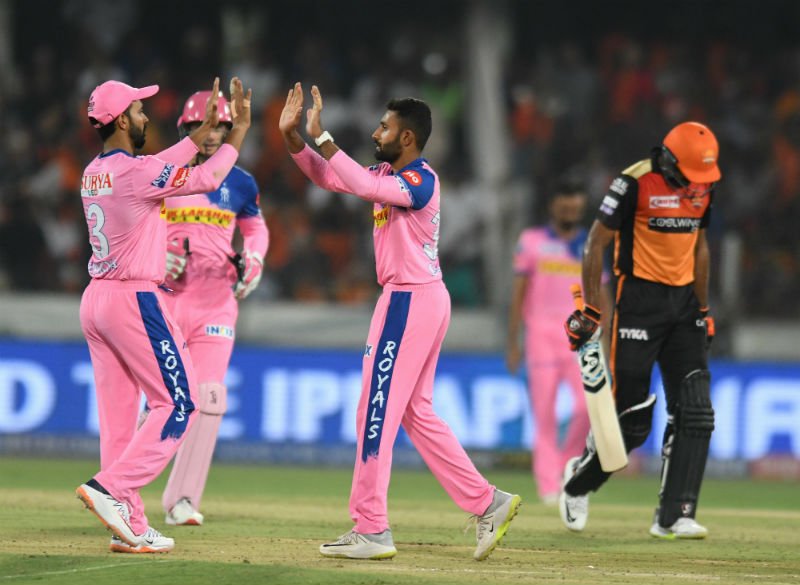 Hyderabad’s middle-order. David Warner, and Jonny Bairstow, who is now back home for England duty, did a good job of masking their side’s middle-order frailties, but the issue has been present all along.

With Bairstow gone, Manish Pandey has found form to take up the run-scoring mantle in the top-order. He scored his second successive half-century on Saturday. Along with Warner (37 off 32), he set things up beautifully, taking Hyderabad to 103-1 in 12 overs.

However, in the next 48 balls, Hyderabad added just 57 runs and lost seven wickets. Batsmen from numbers four to seven collectively accumulated a measly 22 runs, and their failure to string together partnerships cost the team dear. Hyderabad are still perched at No. 4, but if this middle-order malady continues, it is difficult to see them book a playoffs spot for themselves, no matter how well Warner and Pandey play.

“Liam Livingstone opening for the first time in the IPL was magnificent.”

“I’ll be pleased if they make a combined fifty.”

– Kane Williamson is not expecting too much from the middle-order

Double-header Sunday. Royal Challengers Bangalore hope to keep up their winning streak as they take on Delhi Capitals, while Kolkata Knight Riders, too, face a must-win situation as they tackle Mumbai Indians for the first time this season.