Watch: Marcus Stoinis was left seething following his dismissal, a ball after the previous delivery was questionably not called wide during the IPL 2022 clash between Royal Challengers Bangalore and Lucknow Super Giants.

Chasing 182 for their fifth win of the tournament, Lucknow needed 34 in the last 12 deliveries, with Stoinis on strike to face Josh Hazlewood. The big-hitting Australian shuffled across early before the delivery was bowled, which forced Hazlewood to bowl wider, and beyond the white tramline. The on-field umpire Chris Gaffaney, though, considered it a legal delivery as Stoinis had moved across considerably, much to the dismay of the batter.

Pommy Mbangwa, on commentary, said: “The batter goes across, and when he goes across, he [the bowler] gets leeway, but I think you still got to stay in the pitch.”

The very next delivery, Stoinis, looking for a big hit, shuffled across early yet again with the intention of slog sweeping a full ball over square leg. However, he was unable to make contact, with the ball brushing past his pad and rattling the stumps. The batter roared out an expletive, walking back for a 15-ball 24.

Following the game that RCB won by 18 runs, Hazlewood stated that he was lucky to escape the wide call. “I got pretty lucky on that one. I might owe Gaff (Chris Gaffney) a beer after that one.”

After the game, Stoinis was reprimanded for breaching the IPL Code of Conduct for an unspecified sanction and admitted to the Level 1 offence. 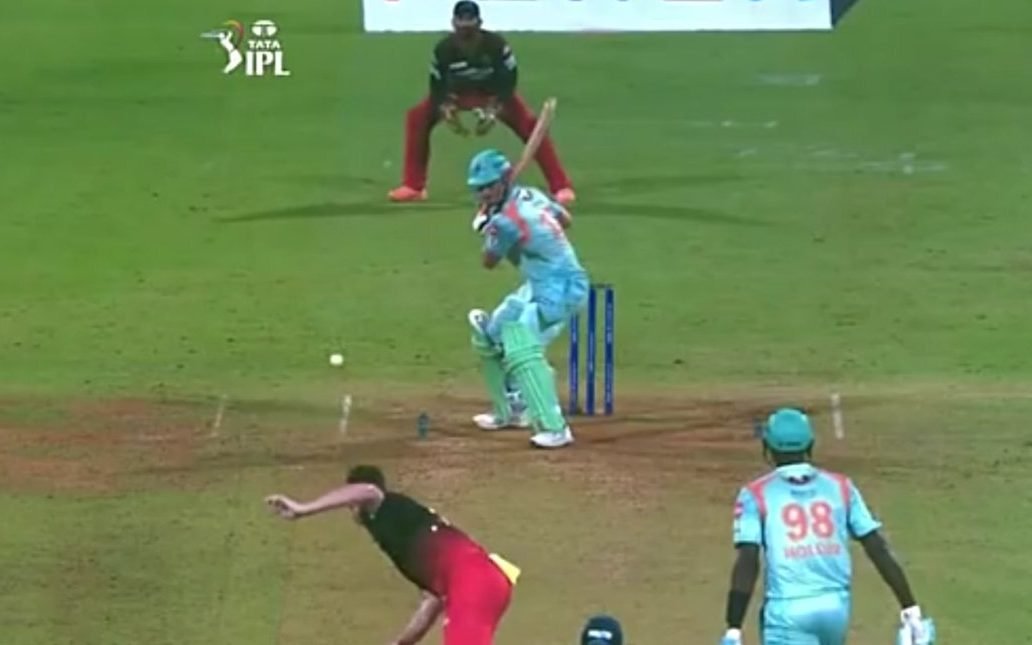 The delivery before Stoinis’ dismissal