Du Plessis, the former South Africa captain, wasn’t picked for the T20 World Cup beginning this month, despite a run-filled T20 season, which included a prolific stint with the Super Kings that saw him score the most runs by an overseas player in this year’s IPL. While Tahir, also overlooked for the World Cup, wasn’t part of CSK’s winning XI, he played a game in the India leg and was a member of the squad in UAE.

Both players were ignored in a congratulatory post by CSA, which only mentioned Lungi Ngidi – whose last IPL game was in May – for winning the title, saying: “Congratulations @lungingidi on claiming the 2021 IPL title with Chennai Super Kings”.

The post prompted a reaction from du Plessis himself, who replied with “really???”. His long-time South Africa teammate Steyn, who retired from all cricket in August, slammed the post, questioning the absence of du Plessis and Tahir in the congratulatory note.

Steyn wrote: “Who’s running this account? Last I checked Faf isn’t even retired, Imran isn’t retired, both these guys have given years of service to CSA and they not worth a mention? Disgusting.”

The post has since been deleted, but screenshots are still available on social media. 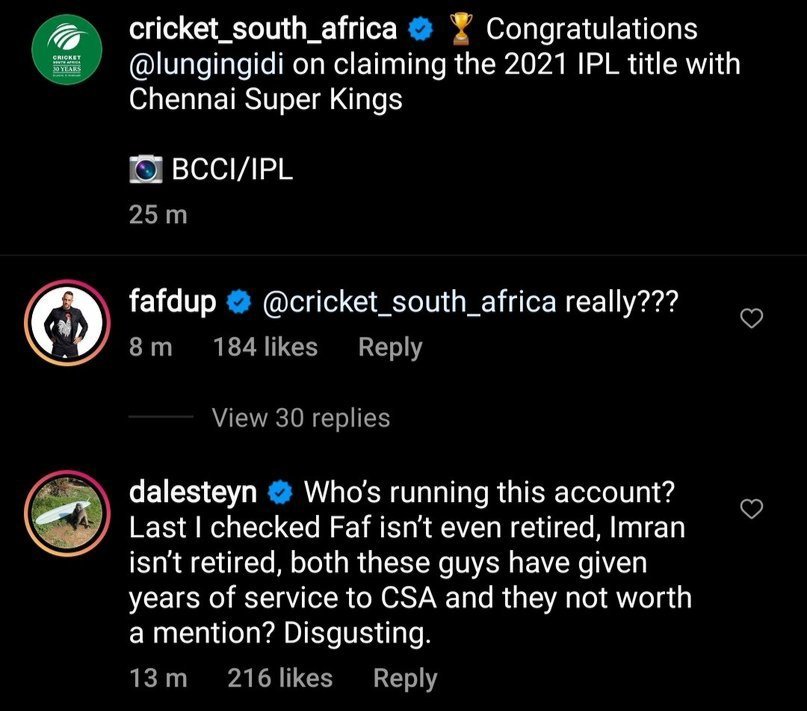 Steyn continued to post about the incident separately, later tweeting “CSA opening a can of worms for themselves with their Twitter and Instagram. Whoever’s running those accounts needs a talking too.”

CSA opening a can of worms for themselves with their Twitter and Instagram.
Whoever’s running those accounts needs a talking too.

Here’s some advice.
Do the right thing.
Delete the post and add all the men involved, save yourself the embarrassment and ridicule.

He followed it up with another tweet, saying: “CSA now blocked the comments section. Here’s some advice. Do the right thing. Delete the post and add all the men involved, save yourself the embarrassment and ridicule.”

Others extended their support to Steyn, including former SA all-rounder David Wiese, who will be representing Namibia at the T20 World Cup. His reply to Steyn read: “Absolutely shocking what’s going on with the @OfficialCSA media account at the moment. Surely @faf1307 and @ImranTahirSA deserve a bit more respect!!”