As a T20 captain, you’re constantly making decisions. A field change every ball, a bowling change every over, expected to give input on lines and lengths for all of your bowlers as they stand at the top of their mark.

The most basic of these choices is whether, in the current situation against the batsman who’s stood at the strikers’ end, you want to be bowling spin or pace. There is plenty else going on, at every point of an innings, but this is the most fundamental choice a skipper will be considering.

So it would have been for Ravichandran Ashwin, captain of Kings XI Punjab, as he stood in the field at Eden Gardens on Wednesday. Kolkata Knight Riders’ opening batsmen Chris Lynn and Sunil Narine were stood in the middle, their first over against Mohammed Shami having gone for one run, meaning that Lynn maintained strike for the second.

In a devastating assault, Narine took Chakravarthy on a tour around the Kolkata stadium

Ashwin looked around the outfield in Kolkata, took in all his options, and made up his mind that spin was what was called for. Whilst a young mystery spinner on T20 debut is not a symbol of reliability – if anything, they are the opposite – Ashwin decided to throw the ball to his debutant, a debutant not just for his team but in this form of the game.

Varun Chakravarthy’s opening over started with a nudged single from Lynn into the vacant mid-wicket region. On the surface, not a significant moment, but leaving that area without cover was an oversight that would cost KXIP and Ashwin dearly. It was an unassuming enough start but then the subsequent five deliveries brought 23 runs. In a devastating assault, the Trinidadian pinch-hitter took Chakravarthy on a tour around the Kolkata stadium, launching him into every corner of the ground as he asserted his own dominance over this upstart.

In an age increasingly driven by match-ups, the Lynn and Narine combination is a fielding captain’s nightmare

It may have seemed like the sort of chaotic passage that can happen in the cauldron that is IPL cricket, but it was the result of tactical refinement and sophistication that can easily go unnoticed. It was an over which brought to bear everything that is new and innovative about T20 in 2019, and brought it to bear onto a young man just beginning his career in that environment.

Welcome to the IPL, Varun Chakravarthy.

Brendon McCullum and Chris Lynn are a brand. “The Bash Brothers”. They adorn the billboards and screens of Brisbane, the iconic duo that define the Brisbane Heat franchise. McCullum’s final appearance for the Queensland side in this season’s BBL was met with an outpouring of emotion and universal praise the likes of which has perhaps never been seen in domestic T20. A riposte to those who doubt T20 can create loyalty and feeling.

Yet despite Lynn and McCullum being a marquee opening pair – two brilliant, marketable opening batsmen, two young men who enjoy a beer off the field and clearly get along; it is Lynn’s partnership with a far more unassuming character – the West Indian Narine, that is worthy of more acclaim. For all the brilliance of Lynn and McCullum, and make no mistake, they are brilliant – they always had a clear weakness: both players could be restricted by spin.

Despite playing together in the BBL, a tournament in Australia where pitches don’t give spinners a sniff, McCullum and Lynn would routinely be targeted with spin in the Powerplay. It was a testament to their brilliance against pace that they remained as destructive as they were, but their dual weakness against spin was a perennial problem for the Brisbane Heat, who more recently were forced to adapt by shifting McCullum to three and replacing him with Max Bryant at the top.

Ironically, it took an injury to Lynn at the start of the 2017 IPL for KKR to try Narine at the top of the order. KKR were aware that in the season previously their partnership of Robin Uthappa and Gautam Gambhir – the bedrock of their success for so long – was in danger of being left behind by a rapidly evolving game which saw teams bat increasingly aggressively in the first six overs as they sought to maximise the fielding restrictions.

Lynn – fresh from a brilliant BBL season – was supposed to be the solution to this problem but when he injured his shoulder in the second match of the 2017 season, KKR adapted by promoting Narine to open who had done so effectively a few months earlier for the Melbourne Renegades. 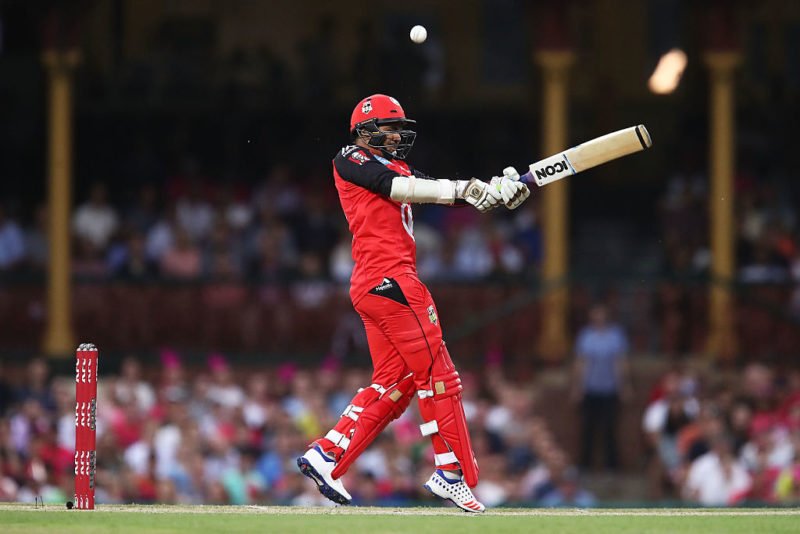 Narine was an instant success, scoring 37 off his first 18 balls in his first innings and 140 runs off 86 balls across his first eight innings in the role – a run rate of 9.72 runs per over. Narine was the perfect pinch-hitter – since being promoted to open the batting he has attacked 80% of his deliveries for KKR, making him the most attacking batsman in the IPL.

Not only was Narine attacking but his ability to hit up and over the inner ring made him perfectly suited to the phase with only two fielders outside the 30-yard circle. Additionally Narine’s ability to hit straight – targeting long on and long off – also suited the period, with few captains initially deploying fielders in this region.

Such was Narine’s effectiveness in the role, when Lynn returned from injury a little over a month later KKR opted to pair him with Narine and the results of their first opening partnership were spectacular. On May 7th Lynn and Narine opened together for the first time in a T20 match at the M. Chinnaswamy Stadium in Bangalore and proceeded to break the record for the highest Powerplay score in T20 history, bludgeoning an astonishing 105 from their six overs.

In an age increasingly driven by match-ups, in which analysts pass messages to coaches and coaches pass them to captains – the Lynn and Narine combination was a fielding captain’s nightmare. What do you bowl? Pace and be shredded by Lynn? Or spin and be mauled by Narine?

Narine and Lynn have now opened the batting for KKR 19 times and together they have added 496 runs, but the volume of their contribution is not the most effective measure of their impact. The average partnership between Narine and Lynn only lasts 15 balls – meaning overall they are not even making it halfway through the Powerplay phase. What matters is their scoring rate – a sensational 10.55 runs per over – making them the fastest scoring opening partnership in IPL history. Nobody does what they do better than them.

Aside from natural timing and power – of which both players have in abundance – central to the success of Narine and Lynn has been the difficulty of planning who to bowl to them. Such is the difference in ability between them against the two respective bowler-types that opposition captains have been known to wait until one of them has taken their position at the strikers’ end before making a call on who will bowl the first over. At which point Narine and Lynn simply swap so Narine can face the spin and Lynn face the pace.

As a combination they disrupt the plans of the fielding team, spooking captains into making a change

The dilemma faced by KXIP earlier this week encapsulated the difficulty of planning for Lynn and Narine at the start of the innings. In the post-match press conference, KXIP’s head coach Mike Hesson explained that the reason behind bowling Chakravarthy in the second over was that Lynn was on strike. But all it took was an uncontested single off the first ball of the over for Lynn to turn the strike over and for Narine to set about his work.

In the next over Lynn proceeded to wallop two fours off the bowling of Shami, tucking into his preferred pace bowlers before being dismissed. By that point, KKR already had 34 runs on the board before the end of the third over and the opening partnership had done its job.

The benefit of Lynn, Narine and KKR’s double-edged sword goes beyond their individual impact on the match. As a combination they disrupt the plans of the fielding team, forcing them to alter their pre-match thoughts and adjust their strategies, spooking captains into making a change – sometimes as late as the last ball of the over depending on which of the KKR openers is on strike.

Such has been Lynn’s dominance against pace – particularly after a stellar BBL season in 2017/18 – teams have prioritised restricting him with spin, as KXIP tried on Wednesday. However, the specific evolution of Lynn and Narine’s batting over the last two seasons has arguably made this the more risky of the two options.

In the last few years, Lynn’s scoring has continued to be slowed by spin but he has significantly improved his dismissal rate, surviving for appreciably longer at the crease against it.

Meanwhile, Narine’s batting against spin has gone from strength to strength with his strike-rate against the slower bowlers rising even higher.

While Lynn has improved against spin the same cannot yet be said of Narine against pace who has displayed major problems against short lengths.

Lynn’s recent form against pace has also taken a slight downturn with his strike-rate in the most recent BBL season of 131 his lowest of his career so far. 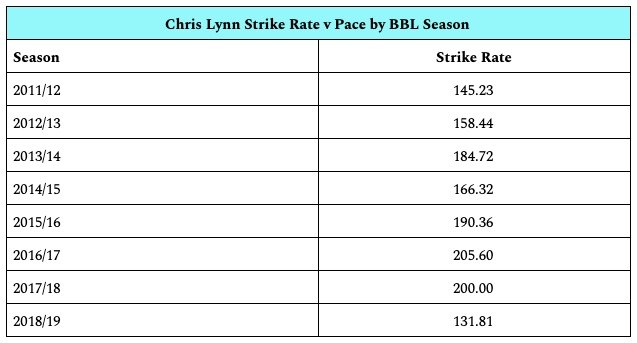 On current form, it is now the West Indian against spin – not the Australian against pace – who poses the greatest threat.

The optimal strategy to counter the pair appears to have gone 180°, with fielding teams now best suited to opening with quicks and targeting Narine with the short ball, even if that runs the risk of a mauling at the hands of Lynn. Admittedly, Narine still scores at a rapid rate against the quicks but his dismissal rate against them – particularly against short lengths – offers a significant weakness to be exploited. It is a testament to the brilliance of Lynn, Narine, and the strategy as a whole, that we have reached this point.

As teams become more tactically aware, we may well see the Narine-Lynn template adopted across the board, by more teams and in different competitions. In other forms of cricket, left-hand, right-hand combinations are prized at the top of the order, because it disrupts a bowler’s length and line. In T20, where lengths and lines are so fluid and varied anyway, the benefit of such partnerships is limited – although Narine and Lynn are also a left-hand, right-hand combination. In their place, pairs where one partner dominates spin and the other dominates pace can provoke similar disruption in the mind of the bowler and bowling side.

Fundamentally, the way KKR use Narine and Lynn is an elegant solution to two different problems, cancelling out the respective weaknesses of two dangerous but flawed cricketers. Other sports wouldn’t think twice about such tactical choices, but cricket is behind most others in this regard. T20, with its strain on resources through money and time constraints, encourages efficiency and ingenuity. This is one of the earliest, and most successful examples, of what this climate can produce – without a doubt, it will not be the last.

Ben Jones and Freddie Wilde are analysts at CricViz.