For the latest ‘Cricket and I’ in the December issue of Wisden Cricket Monthly, I travelled to Manchester to meet the second most capped Manchester United footballer, and now the game’s most revered pundit, Gary Neville. Arriving at his own Hotel Football, overlooking and adjoined to Old Trafford, I’m offered a cappuccino, which arrives chocolate-sprinkled with ‘CF’ and accompanied with a football chocolate. I wait while staring at the rolling Sky Sports news on every wall, working out which one, and at which angle, is easiest to watch.

In Hotel Football, you literally cannot move for football. There are FourFourTwo covers on display everywhere, adorned exclusively with United players over the ages looking pretty much exclusively gladiatorial. A boardroom meeting is in its beginnings and the hotel lobby is stretched with gathering businessmen, uniformed in what can only be described as rosette-less 1970s FA Cup final team suits. Ushered straight out of one meeting and onto my table, Neville bounds up to me. “Cricket? I love cricket. I absolutely love it”. Realising I won’t have to do too much prompting, and buoyed by his energy towards the topic of our own beautiful game, I begin, more instinctively than I’d planned, by getting something off my chest.

I know you will have heard far worse than this over the years, but when I was young, I hated your United side. Nearly as much as the Australian cricket team. I think it was just all the winning. Both teams have been a revelation to me since, in that, in your post-career lives, I have had to accept that I like all the personnel in those sides. I draw a lot of parallels between the two in so many ways. Did it ever strike you that you had so much in common?

Neville laughs slightly, looks up into his head as if contemplating the comparison, pauses to organise his thoughts, and begins to reel off those names…

McGrath. Warne. Gillespie. Gilchrist. The Waughs. Hayden. Taylor. That Australian side was everything I would want in a team. Everything. They were, for me, the ultimate cricket team. You think about Glenn McGrath, coming in at 78mph. Medium pace really. But just putting it on the spot. Warne was just genius. You know what I love? The mentality. They were always on the front foot and they never backed off. That United team, you’re 3-0 down against Tottenham, but you’re thinking, we score one and we’ll win this. That’s the thing about that Australian team too. They know they’re not beaten. The great teams apply pressure. Not just pressure on the pitch, but pressure up here [points to his temple], they’re in your heads. That terminology, ‘They were beaten before they went out’, it really happens you know. The Australians were confident, aggressive. The word I would use is uncompromising. I had a partnership with Matt Hayden at club level, which was 200-odd, have you seen the picture?

A cricket club is a community. There’s whole generations of everyone coming together, that’s genuine community. Cricket does that a lot better than football

He finds a photo from the Bury Times in 1992, with the almost impossibly perfect image of him and Hayden in front of a scoreboard, showing them both not out in the hundreds, posing with their bats aloft.

It was the semi-final of the cup. He’d come over to play for our club side. What do I remember? I’ll tell you what I remember, nearly losing the bastard game. We got a dodgy decision right at the end and we won. It was an unbelievable amount of fun. I played really well up to about 80-odd, scrambled a little bit to 100. I hit a bad shot, and Hayden came up to me and said, ‘Concentrate, I don’t want any of that crap, this is not the time’. That mentality of ‘You don’t get out, you don’t give your wicket away’. That was something I didn’t value enough. He did. Even then. He valued his wicket. He could actually just flick it off his legs for six, just glide it, and you’d be like, ‘Hang on a minute, how’s that ended up in the trees?!’ His timing was incredible. He was massive, a monster, the cricket bat was like a rounders bat in his hands. He had complete belief in himself. 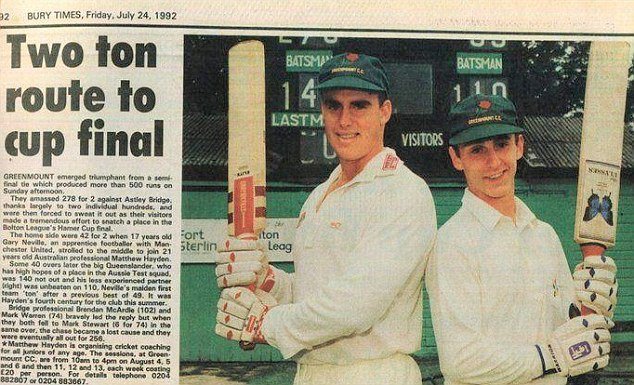 Hayden and Neville: what a partnership

So you were a serious cricketer?

I was an impatient batsman. My brother [former Manchester United player, Phil Neville] could bat for five hours. He’d bat all day in the school games. No problem. Leaving the ball outside off-stump, hitting the bad ball. He was a fantastic cricketer. He had the temperament for it. He broke all of Atherton and Crawley’s records as a teenager. He was on the right path, then football took him. That picture though was my last ever cricket game. My youth team coach didn’t know I was still playing, he saw the photo and he came and stopped me and Scholesy. Scholesy was a keen cricketer too. If you crack your ankle or dislocate your elbow, or even pull your hamstring running after a ball, you’re injured. I was disappointed at the time but I look back now and think that being told to stop was probably the right thing.

Cricket was a huge part of your life from a young age then?

If you were brought up in England in the late Seventies, Eighties, you might get one game of football a week but you’d have five days of Test cricket on terrestrial television. Culturally cricket was in your system. In terms of playing it, it’s been in my life from the very beginning, probably more so than football. My dad played cricket every Saturday at Greenmount CC, which was an institution in our lives. It was a constant. I’d say cricket toughened me up in my early years a lot more than football, because I was playing in third, second and first team until the age of 15. We were playing with men, some professionals of that time, fast bowlers, with your helmet on. It was really scary. 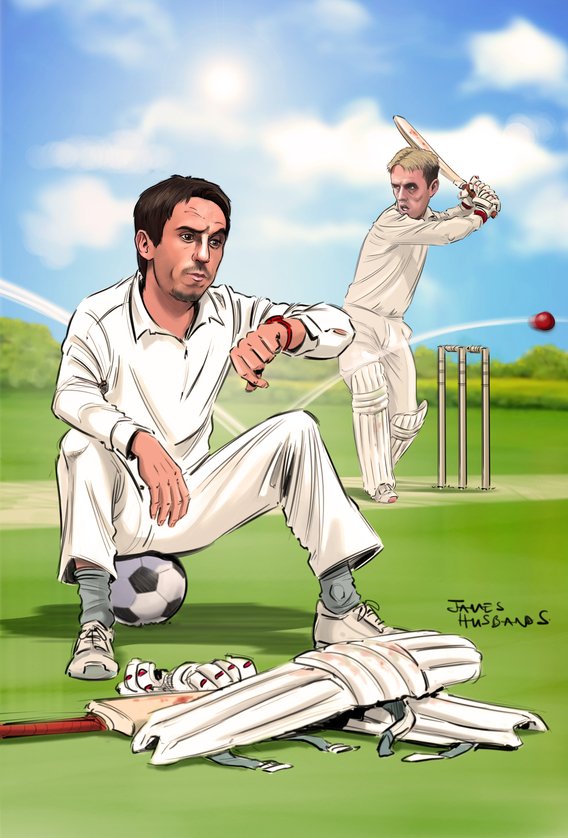 He then leaps up out of his seat to imitate backing up at the bowler’s end.

When I was 14 I was playing Kersley away and I got Mankadded. I backed up once, not concentrating, he stopped and warned me. Did it again. I wasn’t stealing. He clipped my bails off. I’d say he was older than 40. Anyway, it kicks off, my team come running over, ‘You’re a f***ing disgrace’, but it was a lesson. You’ve got to smarten up. It’s a bit like diving for a penalty. Football fans hate diving. But, to dive, you’ve got to give someone the chance to dive. I was the defender, if I gave someone the chance to dive, it’s my fault, I’ve stuck a leg out. I take my responsibility. At the time I blamed him and thought it was unsporting but actually looking back at it now, ‘I need to be smarter, shrewder, cuter’. The idea that you think you’ve been conned is actually not right, you should be smart enough. So cricket did teach me a lot in the early years about adult sport – mentality, the importance of winning, but also the social side of it.

The social side of it?

Cricket is a far better social sport than football. My nan, my granddad, my dad would be at every single game we played. They’d be in the bar. When I think of the times we had at Greenmount, it was unbelievable really. You all came together. People talk about community, it’s a buzzword, but community is a sports club. A cricket club is a community. There’s whole generations of everyone coming together, that’s genuine community. Cricket does that a lot better than football. 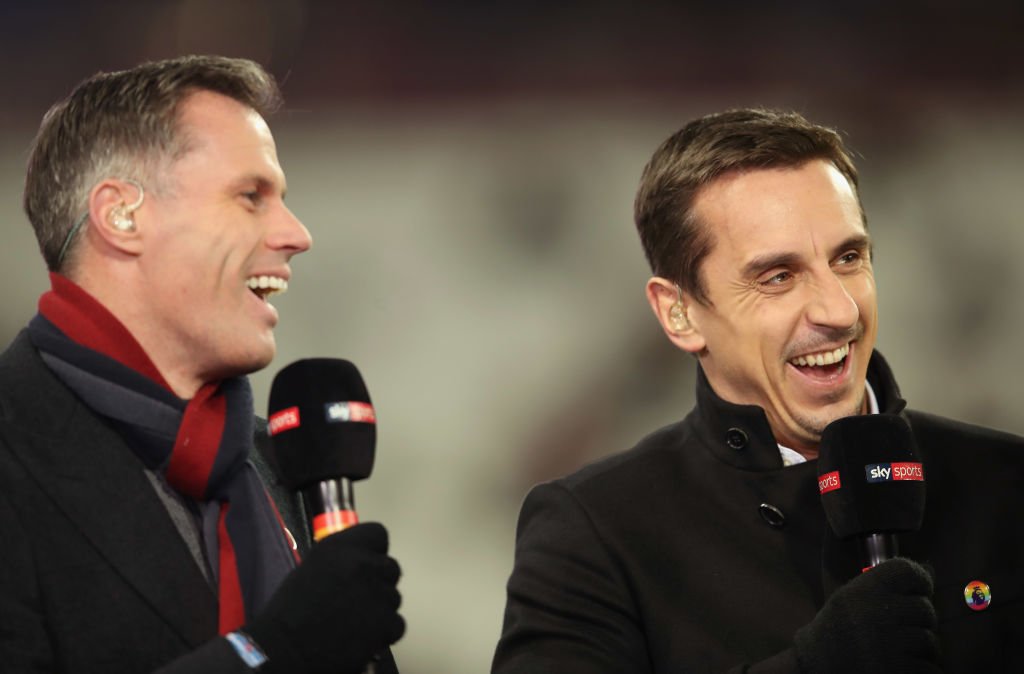 Neville is now a respected pundit

Does it continue to inform what you do in any way? Do you take anything from cricket punditry for example?

The detail in cricket punditry is unbelievable. The conversation, the analysis, the detail now is incredible in cricket. It’s a joy to listen to Warne, David Lloyd, Hussain, Atherton, Botham, Holding. Talking about the stories of old, mixing with the stories of new, some anecdotes, the crowd. You trust them. Growing up, you think of listening to Richie Benaud. The voice that gives you the feeling of watching a big Test match.

For me, there’s something of the essence of Test cricket in your style of punditry. This idea that it’s not just about the goals, it’s about the story and the sequence of events, the narrative and the context. I can imagine you are a Test cricket fan over the shorter form?

Test cricket is the ultimate, it’s the peak of sport in terms of concentration and mental resilience. I don’t like Twenty20. Can’t stand it. Unfortunately these days, people want a result after 10 minutes, they don’t want to watch a five-day draw. But I think that’s the struggle of Test cricket. I’d rather watch six hours of Test cricket than six hours of T20 or a one-day game, even if not much has happened. If something’s not happening, sometimes it’s even better, to not make something happen for six hours is a talent! If you’ve got to survive a Test, batting for the last six or seven hours to save it, that’s a talent to get through that, knowing full well that even if you lose one wicket in the last hour, or last two hours, it’s on. That idea that you can collapse is fascinating. I used to think the biggest test in sport is fielding for a day and a half, in hot conditions, then being sent out for an hour as the opening batsman when the crowd are up. I used to be watching and thinking, ‘Right, this is a great hour this, even if it’s only 15-0 at the end of the day’s play’.

Will you be watching the Ashes?

Oh, I’ll be up watching it for sure. That’s my one dream, to go to Australia for the Ashes. Boxing Day at the MCG. One day I’ll make it there.

On that admission, he’s tapped on the shoulder and reminded that he’s spent much longer than the allotted time talking about a game that isn’t football. Before being whisked off, I ask what his all-time England team would be. After seriously considering it for an intense few seconds, he gestures that I need to write it down. He reels off names, tells me which to cross off, and switches some batting positions until he is happy. I have borderline illegible handwriting, especially it turns out, when under pressure from Gary Neville. He takes his phone and takes a photo of the team, tweets it out, and then, looking at the hundreds of immediate responses, laughs and says, ‘Oh man, your handwriting is taking a beating’. With that, he’s off to the next meeting.

Doing a cricket interview with @felixwhite ! My best ever England 11!! pic.twitter.com/6Icst1DAdV

Find out more about Issue 2 of Wisden Cricket Monthly