Shane Warne didn’t have the best of relationships with John Buchanan, the man who coached Australia for much of their time as the dominant side in world cricket. What could the coach and star player of international cricket’s most successful ever side find to argue about? Plenty, writes Jo Harman.

If you’ve heard Shane Warne commentate on the Ashes this summer – or in fact if you’ve heard Shane Warne talk, ever – you’ll know that he loves a hobby horse. Be it Cook’s boring captaincy, Beefy’s beery BBQs, Clarke’s funky fields, crap nicknames with convoluted backstories or his latest poker comp; in Warnie’s world, a point’s not worth making unless you make it a dozen times.

That’s all very well when you’re retired and spouting off from the comms box but when you’re still playing and the hobby horse in question is the pointlessness of the existence of your coach, things start to get a little bit awkward.

Shane Warne and John Buchanan were never going to get on, diametrically opposed as they were in almost every sense. A former university lecturer with just seven first-class appearances to his name, Buchanan was appointed as Australia’s coach in 1999 having led Queensland to their first Sheffield Shield title in 1994/95. He set about introducing a whole new coaching philosophy to the Australian dressing room and while captain Steve Waugh and later Ricky Ponting bought into it, Warne did not.

Data analysis and fitness were two of the central tenets of the new regime and Warne just couldn’t see the point. For Warne, a lager-guzzling larrikin whose phenomenal natural talent made his rise to super-stardom inevitable, these were unnecessary complications. Cricket had always been about having a laugh, gobbing off at a batsman, getting him out and then sinking a cold one. But for Buchanan, who’d worked his way up to the top coaching job in Australia despite having no playing career to speak of, they were absolutely integral to success.

Coaching to Buchanan meant more than batting, bowling and fielding; it meant broadening the horizons of his players and developing them as human beings. He encouraged his players to deliver lectures and recite poetry in the dressing room to build self-confidence, with subjects ranging from Hulk Hogan to the Bee Gees. The English press dubbed Buchanan the ‘Wacky Professor’ after a team-briefing document was leaked during the 2001 Ashes that drew on the teachings of fifth Century Chinese warlord Sun Tzu. Warne may or may not have used his copy as toilet paper. 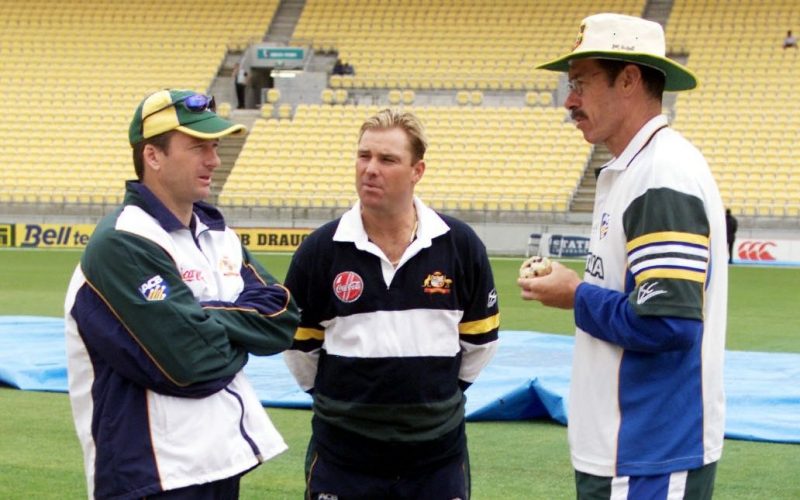 Steve Waugh, Shane Warne and John Buchanan in a pre-match conversation in 2000

Other wacky idiosyncrasies included encouraging his players to practise batting and fielding with their eyes shut, announcing his intention to develop a new breed of ambidextrous cricketers in time for the 2007 World Cup, pushing notes addressed to his own players under the hotel room doors of opponents and a multiple-captain theory during his stint with Kolkata Knight Riders which didn’t go down too well with incumbent skipper Sourav Ganguly. “Tomorrow I can also ask for four coaches,” quipped Ganguly.

Best of all, there was his decision to hold vocabulary lessons during the 2005 Ashes, the intention being to encourage his players to use a list of polysyllabic words in everyday sentences. If he was trying to wind Warne up, he was doing a damn fine job of it.

“The heart said leave him in there, give him another go, but the head said the other leg-spinner is bowling better at this moment in time and we just had to make the tough decision.”https://t.co/NlIlUFv45y

Buchanan lit the touch paper during Australia’s 2000/01 tour of India, criticising Warne’s fitness after the second Test defeat at Kolkata. “It’s no secret that Warnie’s probably not one of the fittest characters running around in world cricket,” he said. Hardly revelatory but it was enough to get the leggie’s gander up. Buchanan would later express regret at his comment but for Warne there was no going back.

The feud escalated when Warne was forced to cut short his season with Hampshire in 2006 for a pre-Ashes military-style camp and described a programme that appeared to be constructed out of his very worst nightmares. “Running up and down with water cans for five or six hours, pushing cars, sleeping in a sleeping bag with no tent, no mattress, out in the middle of nowhere. Orienteering through the middle of the night without a compass. There were 6ft kangaroos out there. [The coaches] were hoping we’d confront one of them – but we didn’t actually see one.”

“He is just a goose and has no idea and lacks common sense, and you can put all that in there”

The bad-blood started to coagulate when Warne was allegedly overheard at a charity do saying: “These boot camps are a big waste of time… after a bit I just turned to the coach and said: ‘I’m weak as piss, I hate your guts and I want to go home. You’re a dickhead’.”

Buchanan’s methods had incensed Warne but they got incomparable results. Under his stewardship between 1999 and 2007 Australia won 26 Tests series, drew two and lost two, winning three consecutive World Cups to boot. In the years that followed Warne wouldn’t miss an opportunity to talk down Buchanan’s role in their success – “the coach is something you travel in to get to the game” etc – but Waugh and Ponting were quick to point out how pivotal he was. 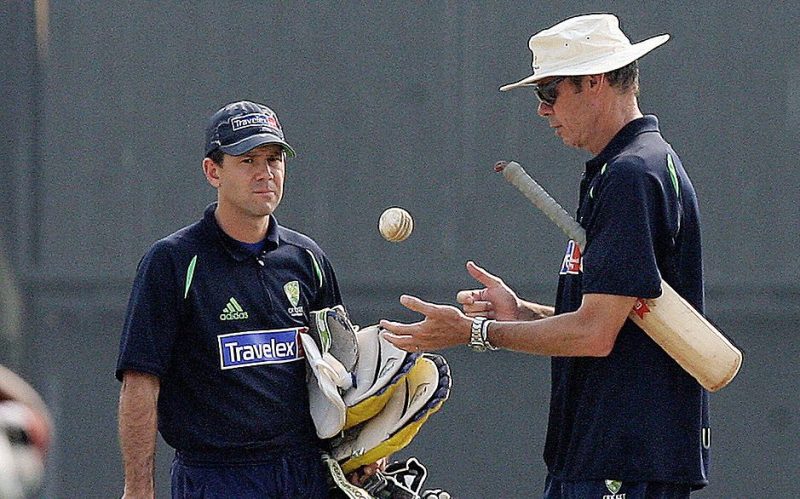 Ponting had a healthy relationship with Buchanan

Buchanan eventually stepped down after the 2007 World Cup win but absence did not make Warne’s heart grow fonder. Later that year Warne launched his most scathing attack yet. “I don’t think he has made one good point in a long time, actually,” he told Sydney’s Daily Telegraph. “Everything that I have read that he says, he is living in pixieland. It just shows what us players had to put up with. We had to listen to his verbal diarrhoea all the time. He is just a goose and has no idea and lacks common sense, and you can put all that in there.”

When Buchanan was given a role coaching England’s youngsters ahead of the 2009 Ashes, Warne couldn’t resist ruffling the goose’s feathers once again. “I think that’s a great move because that means we’ve got more of a chance. Hopefully Buck [Buchanan] will be doing his stuff and he’ll be working and doing all his things and hopefully over-complicating things. I reckon it gives our chances a big boost and makes our blokes more hungry.”

“It is puzzling that a person of his stature in cricket, someone with iconic status, would continue to criticise me”

For his part, Buchanan remained quietly puzzled by Warne’s outbursts. He rarely acknowledged the feud in the media but said in his 2009 book The Future of Cricket: “Since Shane and I left the Australian cricket team, his critical views about my role have continued. It’s disappointing coming from someone like Shane who, on the field, has been a player and a person who has changed the face of the game.

“It is puzzling that a person of his stature in cricket, someone with iconic status, would continue to criticise me. It would seem at times he does not put the same thought into these comments as he would in extracting batsmen from the crease.”

In 2013, Mike Hussey floated an intriguing theory about the Warne-Buchanan relationship. “I think the way John spoke to and treated and tried to motivate Shane was genius. He almost tried to get into an argument with him or challenge him with things that were a little bit leftfield. So Shane would say, ‘John, you’re dribbling rubbish. I’ll show you how to do it’, and he’d go out there and do it. In my mind that’s absolutely genius coaching.”

If Hussey’s theory is correct, then Buchanan is even sharper – and even wackier – than anyone gave him credit for.