You don’t take on the Fremantle Doctor, blowing hard into your face at the fag-end of a nasty day, when you’re trying to save a Test match to keep your team alive in the series, and half of your own dressing room have already abandoned you, and the Australians have posted a man back for the shot, and the spinner tosses it up there as if to say “Go on, punk, make my day”, and the libated patrons of Perth are ready to roll, and you’ve already written half of your book in your head and it’s not making great reading… You just don’t, do you? Unless you’re Kev, of course. Then you do.

Most entries in this list carry some kind of context, in turn elevating the shot’s essential crapness to the gloried ranks of the truly abysmal. But sometimes, a shot is just bad for bad’s sake. Step forward Ijaz Ahmed,  a player conceivably good enough to bat No.3 for Pakistan in a Lord’s Test. Eight balls in, he topples down the track to Dominic Cork, staggering darkly to the off-side and entangling his bat between his legs, as the ball, which he’s now a full six feet away from hitting, ambles embarrassedly behind his legs and into middle stump.

When you’ve fielded for 160 overs in sticky heat and your team’s four down for 69 in reply, and it’s the third morning of the first Test of the toughest tour, and you’re about to face your first ball, and they’ve kept the men up on the drive, and it’s starting to take spin, and you’re the most gifted and fragile strokesmith of your generation, and you so want to project, there really is nothing else for it. Oh, Belly.

The shot itself was coolly played: in the midst of a tropical downpour, Mark Boucher, believing his team to be ahead of the Duckworth-Lewis required score, rolled his wrists on a Murali off-break, smothering the spin, easy as you like. The slight problem with the choice of shot was that South Africa still needed one more run; as it was, they were merely tying with Sri Lanka – and a tie would see them out of their own tournament. The umpires scampered off seconds after Boucher’s horrifying miscalculation, and with the rain set in, they never got back on. 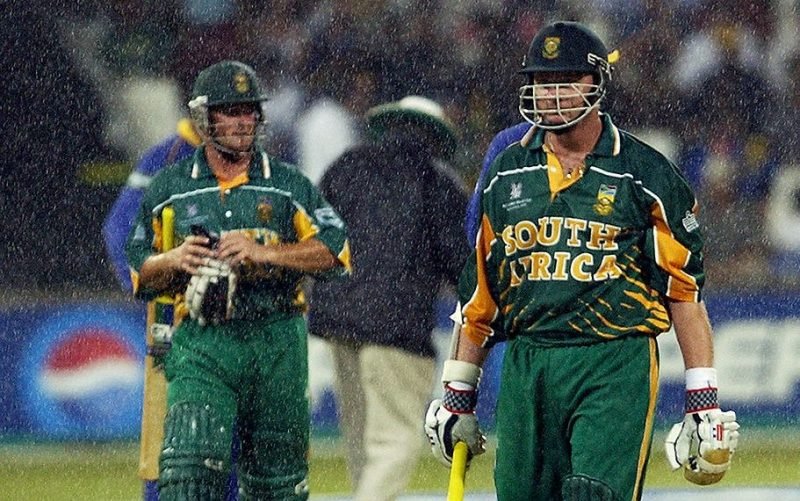 He’s been brilliant. World-title winning brilliant. Man of the Match in a showpiece final brilliant. Which makes the nonsense of his departure all the more glorious – running down the pitch, giving himself room, moving too far to the leg-side so he can’t get back to the ball in time and shouldering arms as the ball crashes hilariously into his unguarded stumps. Fabulous.

5. Nuwan does it worse

It seems harsh to target a No.11 but this is too funny to overlook. It all begins with a heroic if somewhat garbled attempt at a hook shot. As the ball crashes into his shoulder Pradeep mislays his balance, pirouetting on the crease and flipping back towards his stumps, flattening all three on the descent.

The ball itself is a dirty pie, far outside the eyeline, leg-side and swinging wider, the final ball before lunch. Lesser men would let it slide by, or tickle it behind square for a couple. Not our hero. Gower unwraps his perfect hands, times it sweetly, and lobs it straight to the man three-quarters back to the boundary, just posted for that specific shot. At the other end, his captain, Gooch. By this point on the tour, neither man is especially disposed to the other. “If looks could kill, Gooch would be on a serious charge,” wrote the Guardian’s Mike Selvey. “But you would not blame him.”

Mohammad Ashraful’s leggies were such filth that AB, on 46, climbed into what appeared to be another long hop, only to find the nasty little grenade bouncing a second time right by his feet. The attempted hoick was skewed up in the air and the bashful bowler took the catch. Umpire Steve Bucknor was right to uphold the out decision, just as MCC were right to subsequently adjust the law to make any ball that bounces twice an automatic no-ball.

Of all the gazillions of options, no single moment so vividly captured the gulf between England’s haunted lambs and Shane Keith Warne as the sight of poor, frozen Adam Hollioake, in his third Test innings, at his home ground, shouldering arms to a full, straight non-turning leggie that crashes into his middle pole halfway up. This was the Nineties right here.

The big kahuna. Eludes all comprehension. Last ball of the penultimate over, there’s a Test series to save, and your partner’s batted all day for 101*. He’ll take the last over, job done. One ball to see out. One ball. Dead pitch, tired leggie, one ball. It’s a loopy thing, outside off stump. Shannon sees it, sees it all the way, opens the shoulders, lifts up his bat: ‘ave it. The perfection of Fazeer Mohammed’s commentary is in direct opposition to the terrifying brainlessness of the shot, which, now executed, has seen the ball trickle off the whirling toe of his offending bat and onto his stumps. “WHY DID HE DO THAT?!” cried Fazeer. We’re still no nearer to finding our answer.

"No way to swerve the strangeness. It’s everywhere"