Sharp, witty, puerile or petty – Will Macpherson pens down a selection of some of the most noteworthy and memorable banners and placards.

Anderson Cummins played for the West Indies and Canada, as well as Surrey and Durham, but his finest achievement was surely being the subject of a banner at a Test match he didn’t even play in. The Barbados crowd had been expected to turn out in force for South Africa’s readmission Test in April 1992 but home fans, angered by the selection of Kenny Benjamin ahead of local favourite Cummins, chose to boycott the game. The mood was summed up succinctly by a banner which read, ‘No Cummins, no goings’.

Still livid at Stuart Broad standing his ground after middling the ball to slip at Trent Bridge in 2013, the Aussies decided to let the “smug Pommie cheat” know what they thought of him when he arrived down under a few months later. There was the Courier Mail, who issued a ‘Broad Ban’ and insisted on only referring to him as “the 27-year-old medium-pace bowler”, and a deluge of expletive-laden chants and t-shirts. The campaign also inspired a series of banners, including ‘Stuart Broad – I know what you did last summer’ and the barely literate ‘If ur a terrible Cook and a dud Root ur Broad will cheat!’. Broad loved it, of course. and brandished the offending newspaper at the Gabba press conference after taking six wickets on day one. 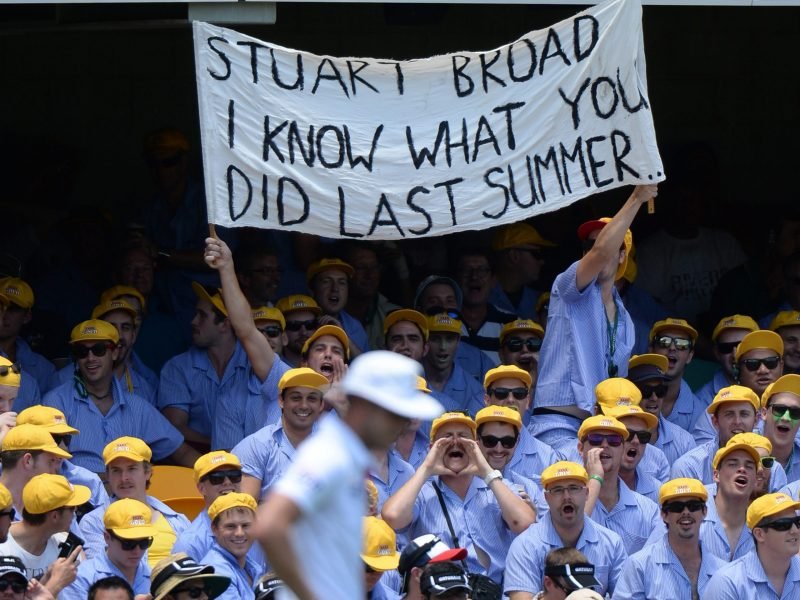 More than just ‘a gentle reminder’?

Kamran Akmal couldn’t catch a cold during Pakistan’s 2009/10 tour of Australia, dropping Mike Hussey three times and messing up a simple run-out chance during the Sydney Test, which the tourists somehow contrived to lose. The Pakistani keeper was axed as a result but he didn’t lose the affection of a supporter in the crowd in the next Test at Hobart, who unfurled a banner which read: ‘Akmal you have my heart… don’t drop it!’ 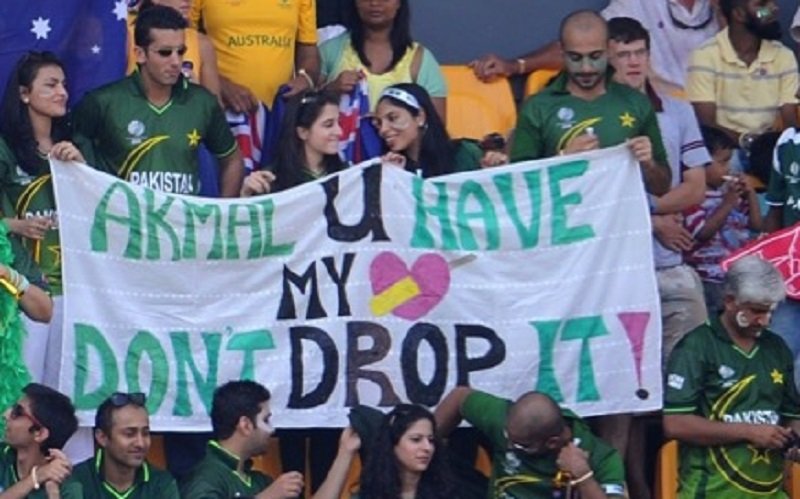 Not the worst of motivations, is it?

Buoyed by the whitewash of the previous winter, Australia was not about to let England quietly slip into the country for the 2015 World Cup. In the week before the Valentine’s Day tee-off at the MCG a series of posters popped up around Melbourne with the legend: ‘MISSING: Pair of balls. If found please return to the English cricket team #MissingBalls’. To ram home the point, a bus daubed with the hashtag rode alongside the England team bus on the way to practice and two planes trailing the same message flew overheard as they trained. The wags at Sportsbet proudly claimed responsibility for the ruse.

More smutty chat from those cheeky Aussies. You may recall Darrell Hair had some issues with Murali’s action during Sri Lanka’s tour of Australia in 1995, no-balling the Sri Lankan for alleged chucking during the Boxing Day Test. It was a mucky saga that left a bad taste in the mouth and inspired a banner offering support to Murali which read: ‘Hair or no Hair, Murali’s balls are fair’. Cop that, Darrell.

Andrew Flintoff’s boozy pedalo escapade during the 2007 World Cup is one of cricket’s most well-worn tales, but less well known is one enterprising individual’s valiant effort to do some peddling of his own off the back of the England all-rounder’s misadventure. During England’s fixture against Kenya the shrewd entrepreneur advertised his questionable homebrew with an accompanying sign: ‘Flintoff special – available here’.

Cricket crowds can be cruel, and harsh words can be forgiven in the heat of battle, but there was absolutely no excuse for the bile directed at Matthew Hoggard on an England tour of India in 2006. Indian fans, hoping to distract the shaggy-haired seamer, held up a placard which claimed, inaccurately and unjustly, that ‘Hoggy is a doggy’. It’s a wonder the poor lad didn’t leave the field in tears.

From Collis King to the king of Spain, @Phil_Wisden and @Vitu_E pick out 10 less-remembered masterworks. First published in 2014.https://t.co/Jo5HcXQvIG

You don’t often get banners at state second XI games in Australia; you barely even get crowds. But spectators piled in for Victoria’s fixture against Queensland in 2004, and with good reason, since it would be Shane Warne’s first competitive match in more than a year following a ban for a failed drugs test. The crowd were there to see the great man in action, but also to have their fun, with one spectator bringing a sheet daubed with the slogan, ‘Warney! It’s been worth the weight’. But was it? Warne scored 11 and didn’t bowl as rain ruined the day. 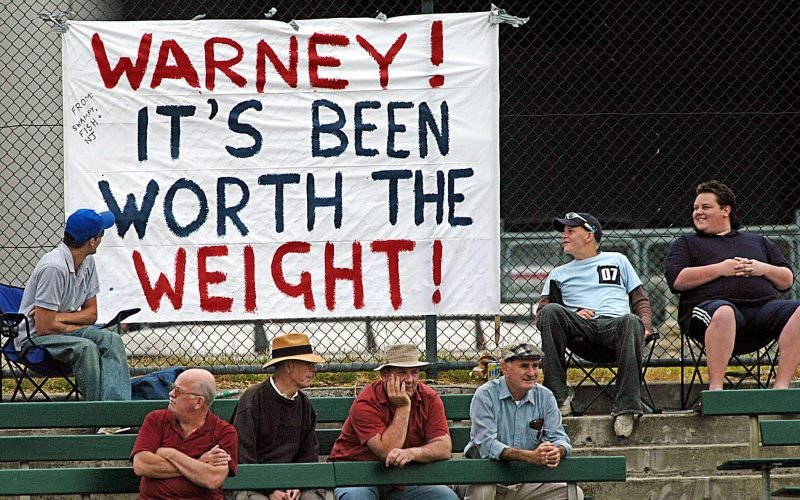 West Indies’ dead rubber at Edgbaston in 2012 is best remembered for the swashbuckling 95 scored by full-time lothario and occasional fast bowler Tino Best. But Denesh Ramdin’s ill-advised riposte to Viv Richards was equally as entertaining. Stung by Sir Viv’s criticism of his performances in the first two Tests – which, in fairness, had been fairly pants – upon reaching his century Ramdin withdrew a piece of paper from his pocket and held it up to the press box. On it were scrawled the words ‘Yea Viv Talk Nah’. “It’s been a long time coming,” Viv replied coolly. “I’m glad he got the motivation to get himself going.” 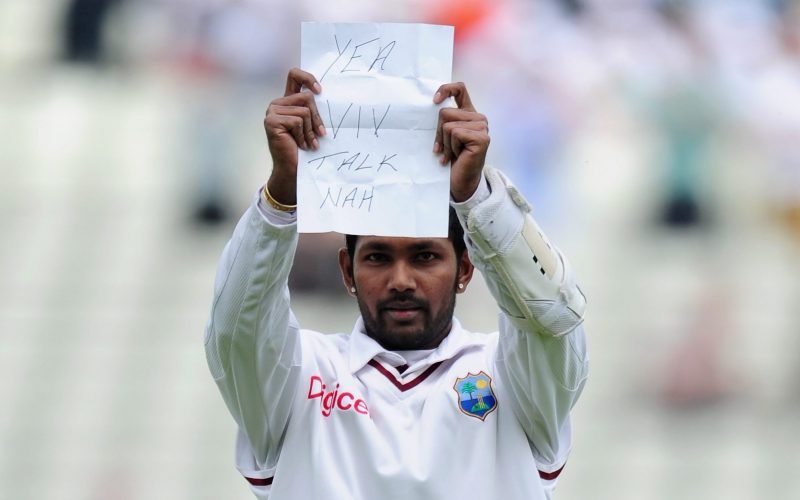 No commentator has achieved the iconic status of Richie Benaud and Sydney Test matches since his death in 2015 have witnessed hundreds of Richie-a-likes dressed up in pale suits and natty wigs with accompanying banners of some his most familiar lines and phrases. He was equally as loved in the UK and his final commentary stint on these shores, during the Oval Test of 2005, was marked by a fittingly understated banner, made up of 50 or more pieces of A4 paper stuck together, reading: ‘Morning Richie, Morning Everybody’. Quite.