Establishment legend Pelham Warner was a giant of the game as a player, selector, journalist and administrator, but what was his beef with Gloucestershire wicket machine Charlie Parker? Paul Edwards examines the rivalry.

Deceptively impassive, wonderfully weathered, Charlie Parker’s face stares out from hundreds of Gloucestershire team photographs. Wearing the county cap in which he invariably bowled, he seems the epitome of the inter-war professional cricketer. But in an era characterised by deference and respect, Parker exemplified nothing so well as an independent spirit.

Born the son of a Prestbury farm labourer in 1882, he was bright enough to win a place at Cheltenham Grammar School and that inquiring intelligence never left him. He liked to use his mind; and then he rather liked to speak it. For example, he greatly admired the 1917 Russian revolutionaries and was a forthright critic of economic and social inequality. He was also, in the opinion of many contemporaries, the finest spinner in England on a drying pitch, although his pace was nearer medium than slow. “On a sticky wicket Charles Parker was the greatest bowler I have seen,” wrote RC Robertson-Glasgow, “for there was no man whom he could not make to look like a child batting with a pencil.” In a first-class career which began in 1905 but only really bloomed after the end of the First World War, Parker took 3,278 wickets. Only Wilfred Rhodes and “Tich” Freeman have taken more. Parker played one Test for England.

There is no shortage of photographs of Sir Pelham Warner either. Captain of Rugby’s 1st XI and an Oxford Blue, he played for Middlesex from 1894 until 1920, skippering the county from 1908. He also led the first official MCC team to Australia in 1903/04 and was on MCC’s committee from 1904 until he died in 1963. By that time he had also served the club as deputy-secretary and president, founded and edited The Cricketer and been the cricket correspondent of The Morning Post for nigh on 20 years. He was joint-manager of MCC’s team on the Bodyline tour and a vastly more successful ambassador for the game in the many other countries he visited. He was knighted for his services to cricket in 1937.

Christopher Martin-Jenkins described Warner in his old age as the “very reverend dean of Cricket’s Cathedral”. The description is apposite, for in the many photographs taken of him as he became more firmly entrenched in cricket’s establishment, Warner could, indeed, be taken for one of Trollope’s Barsetshire clerics. In Katherine Constance Lloyd’s 1949 portrait, he is painted wearing a harlequin cap of red, blue and gold and a dark blue flannel blazer in Lord Hawke’s colours: yellow and Cambridge blue stripes. Few men can have spent more of their lives playing, administering or writing about cricket than Warner. And he was a Test selector in 1926.

Parker played his only Test in 1921, an Ashes summer in which England selected a total of 30 players, 16 of them making their debuts, for the five matches. Warwick Armstrong’s Australians won the series 3-0 but in the rain-ruined fourth game at Old Trafford Parker returned figures of 28-16-32-2, dismissing Charlie McCartney and ‘Nip’ Pellew. He was dropped for the Oval and despite taking over 200 first-class wickets in three of the next four seasons, he was not selected again, either for tours or home Tests.

Parker and Warner rarely played against each other. Their most famous encounter was rather more explosive than anything that might take place on a cricket field. True, Parker caught and bowled Warner on June 20, 1911 when Middlesex played Gloucestershire at Lord’s but at that time Parker was bowling seam up. He only started bowling the slow-medium left-arm stuff after the war and the two counties did not have a fixture against each other in the post-war seasons before Warner retired. By 1923, though, he was one of Wisden’s Five Cricketers of the Year, although the anonymous writer who penned his tribute admitted he had “seen Parker so seldom that [he could] say little about his bowling from personal observation.” The player may have read that revealing mixture of honesty and ignorance with grim relish.

Pelham Warner was the principal guest at Gloucestershire’s 1926 Annual Dinner, which was held at Bristol’s Grand Hotel on February 19. In his speech, so David Foot reports, he paid tribute to Gloucestershire’s captain, Colonel Robinson, and to Walter Hammond. Other Gloucestershire professionals rated a word or two as well. He never mentioned Charlie Parker. However, later in the evening Parker was presented with a pair of silver-mounted cricket balls to mark his achievement in taking 17 wickets against Essex the previous season. He was also required a say a word of thanks. He did so, and then came this:

“It’s nice to hear kind words like this about the players – because, I assure you, they were hearing something very different in the summer, when the team wasn’t doing so well. Mr Warner spoke of the coming visit of the Australians and said, if I remember correctly, that England would be ‘giving the Colonials’ a hot reception… Well, all I’ve got to add is that the selection committee would do well not to overlook some of the players in the less fashionable counties.” 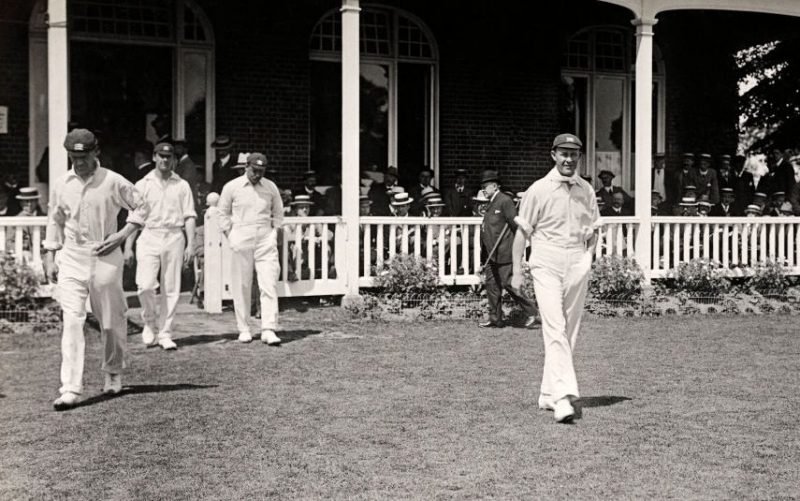 Pelham Warner (right) leading his team onto the field during their County Championship match again Kent in Canterbury, circa 1910

The first two Tests of the 1926 series were drawn. The third was to be played at Leeds on July 10, 12 and 13 and there was every sign that it would be played on a damp pitch. Warner wrote in The Fight for the Ashes 1926 that “a terrific thunderstorm broke over the Headingley ground on the afternoon of July 9, and the wicket was flooded. A fine night was followed by bright sunshine in the morning…” They were conditions that might have been made to order for Charlie Parker, so it was fortunate that England had included him in what would now be called their squad.

The England captain was Arthur Carr and after discussions with the three members of the selection committee, Arthur Gilligan, Percy Perrin and Warner, it was decided to omit Parker from the final XI. RES Wyatt in Three Straight Sticks described the omission as “the most extraordinary decision in all Test history”. EW Swanton in the History of Cricket called it “calamitous”. Australia scored 494 in their first innings and the match was drawn. England won the Ashes when they beat Australia by 289 runs at the Oval, although by that time Carr had been replaced as captain by Percy Chapman.

“This so and so has blocked my Test match career... Make way for him?”

There is, of course, no way of knowing whose words wielded the strongest influence in the decision to leave Charlie Parker out of England’s side at Headingley. But there is absolutely no doubt who Parker believed was responsible.

Warner was invited to Gloucestershire’s Annual Dinner again in 1929. As in 1926, he was asked to make a speech, but so was Parker, who addressed the diners on behalf of the county’s professionals. Yet again, Warner managed to omit the spinner’s name from the list of Gloucestershire cricketers to whom he paid tribute. Parker’s own speech seems to have been relatively uncontroversial although he mentioned his own bowling against Worcestershire the previous season when he had returned figures of 8-7-1-1.

Later that evening Parker and his friend and teammate, Reg Sinfield, decided to get some air on the balcony of the hotel. They had managed to squeeze themselves into the lift-cage when the attendant insisted that room should be made for Mr Pelham Warner. Parker snapped. He seized Warner by the lapels of his dinner jacket.

“I’ll never in my life make way for that bugger. He’s never had a good word to say for me. This so and so has blocked my Test match career… Make way for him? Mr Bloody Warner will go to bed when I’ve finished with him.”

Charlie Parker was probably unlucky not to win more Test caps but he could not have been more fortunate in his biographer. David Foot tells Parker’s story in Cricket’s Unholy Trinity and my piece is plainly dependent on it, especially as regards the words Parker spoke at the 1926 Dinner and to Warner in the lift. Fortunately, David’s journalistic integrity is unimpeachable. His biography of Harold Gimblett and his books of pen portraits, Fragments of Idolatry and Beyond Bat and Ball are also recommended without a fragment of reserve.

Warner was white with shock. Parker was finally persuaded to release his grip and the great man went to his room. Gloucestershire officials heard about the incident but only Sinfield saw what happened. As far as we know, Warner never mentioned the matter. There was no disciplinary action.

Parker retired in 1935 and became cricket coach at Cranleigh School. He died at Cranleigh in 1959. Warner’s ashes were scattered at Lord’s in 1963.