Often an unsung hero of the formidable South African Test team under Graeme Smith, Makhaya Ntini formed a lethal fast-bowling pair with the great Shaun Pollock for a major part of his career. He chose Lord’s to leave a mark of his own, registering his first 10-wicket haul in Tests and thereby, helping his side to a comprehensive innings win.

While many impressive team and individual accomplishments took place in this match, Ntini’s five-wicket haul in both innings – making him the first South African to feature on the Lord’s honours board and take 10 wickets in a match – has to take the plaudits.

But he was far from alone. South Africa scored 682 for the loss of only six wickets – the record for their highest total – and inflicted on England their largest-ever first-innings deficit of 509.

In scoring 259 Graeme Smith surpassed Don Bradman’s 73-year-old record for an overseas player in a Lord’s Test – equalling Bradman’s feat of scoring a double in consecutive Tests against England. He also became the second South African to hit two doubles against them. Gary Kirsten scored his first hundred at Lord’s, shedding a tear after reaching the landmark, while even in defeat, Andrew Flintoff made an explosive coming-of-age hundred in England’s second innings – his 142 coming off 146 balls and taking over as the highest scored at Lord’s from a No.7 batsman.

Upon winning the toss, Smith informed his opposite number Michael Vaughan, in his first match as England captain, that the home team would have the “privilege” of opening up in seamer-friendly conditions. Then Ntini got to work.

Marcus Trescothick was the first to go, hounded by Ntini. The left-hander was never fearful of one ducking back into him, such was Ntini’s angled torso at the crease, but his tight lines suffocated Trescothick, and after surviving an outside edge thanks to a drop at second slip, he duly chopped onto his stumps after over-correcting enough for Ntini to find the inside edge. 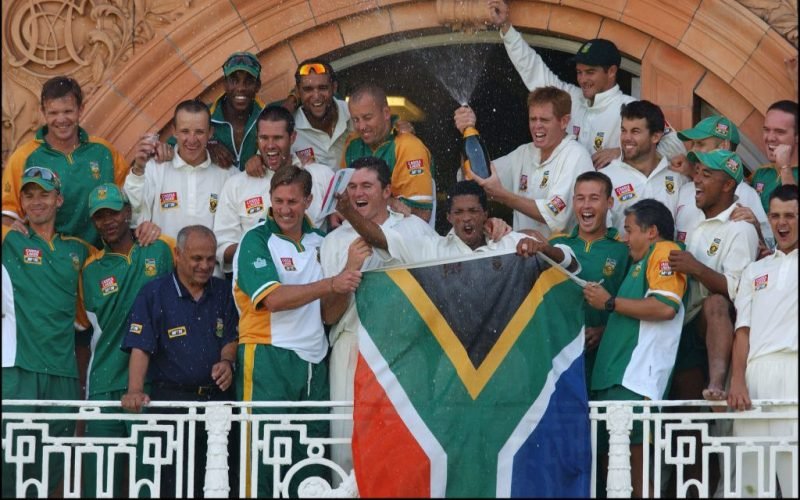 South African players celebrate their win in the Lord’s balcony

Vaughan and Alec Stewart were then rushed into erratic pulls, before the wickets of Andrew Flintoff and Steven Harmison took Ntini to five.

But perhaps the second haul was the more valuable. In easier batting conditions, and with South Africa a bowler light after Dewald Pretorius pulled up lame after four overs in the first innings, Ntini displayed his unparalleled fitness to reel off 31 overs. With the help of Shaun Pollock and Andrew Hall, the trio battled through England’s dogged top six, before Flintoff ’s futile fightback.

Related Story: Makhaya Ntini speaks out about the discrimination he faced in the South Africa side

Perhaps the most compelling period of cricket took place when Ntini was handed the new ball to finish off the English all-rounder. Flintoff pulled him for a four and two sixes in the same over, before trying to smite Ntini through the covers with such force that he broke his bat. Ntini raised his arms in pseudo-triumph, before coning Flintoff on the head with a bumper.

When Ntini finally removed the last man, he fell to his knees to kiss the turf.