John Kay, The Sun’s Chief Reporter and a Fleet Street legend, picked Michael Holding as his favourite character from a life immersed in cricket.

In my mind’s eye, I can still see him set off on his extra-long run with a slight nod of the head before breaking into a graceful, gliding, loping stride.

With the packed Oval ground so quiet that you could hear a sweet paper rustle, he accelerated effortlessly as he neared the wicket. But no sound emanated from the pitch where he sped over the grass as if he was running on water above the waves.

The eerie silence was then shattered by the thud of the ball as it hit the deck – followed a nanosecond later by the noise of a stump hurtling out of the ground and a roar from the crowd.

Michael “Whispering Death” Holding – the only cricketer who could ever be compared with a gazelle – had struck again and another English batsman trudged forlornly back to the pavilion.

It was way back in the baking hot summer of 1976 and the sun-drenched wicket was so benign that all the experts predicted a big-scoring draw. But as I sat through every one of the five days of that Test in the pavilion as a Surrey member, Holding rewrote the cricket history books. His astonishing match figures of 14 for 149 cannot in any way convey the sheer magic of that Test where we all came to realise that we were watching a sporting miracle unfold.

It will also go down as one of those rare games where the side which batted first – England – included a double centurion who ended up on the losing side. As I took my usual seat in the balcony high above the pavilion I picked a position right in line with the wicket — and remained in the same spot throughout the five days.

Even though opener Dennis Amiss scored 203 out of England’s first innings total of 435, Holding routed his team-mates and took eight for 92. Every single one of his wickets was earned with the sweat of his brow – and without the slightest help from the pitch.

Red-hot blistering pace, coupled with subtle changes of line and length, was Holding’s secret weapon and he never wilted even though the temperature was often in the Nineties. The Windies replied to England’s effort with a mammoth 687-8 declared, with the peerless Viv Richards contributing a typically brilliant 291.

When England returned to begin their second innings, I arrived at the Oval extra early to make sure that I bagged my usual ringside seat. This was the golden time, when there were no seat numbers in the members’ stands and you simply reserved your place by laying a copy of the Daily Telegraph on a portion of an uncomfortable wooden slatted bench.

As I walked through the members’ turnstiles near the Hobbs gates, to my amazement I saw Holding strolling along nonchalantly. He was as thin as a beanpole, tall as the Empire State building, and wearing a tracksuit.

In those long-gone days, there were no problems with security and it was common to bump into the players during a Test. I stopped Michael and had a five-minute chat to discuss how he thought the match might unfold. And I told him that he would be knocking over records like nine-pins if he produced a similar bowling performance in England’s second innings.

As he walked away, I noticed a twinkle in his eyes and a sly grin crease his face. But I am sure there was terror in the eyes of the English batsmen when they went out to the crease.

And how right they were to be mortified. In just 65 minutes from the start of play, Holding reduced England to 78-5 with the most venomous display of fast bowling ever seen at the Oval – or probably at any cricket ground. He ended with figures of six for 57 to take his match tally to a historic 14 wickets for 149. 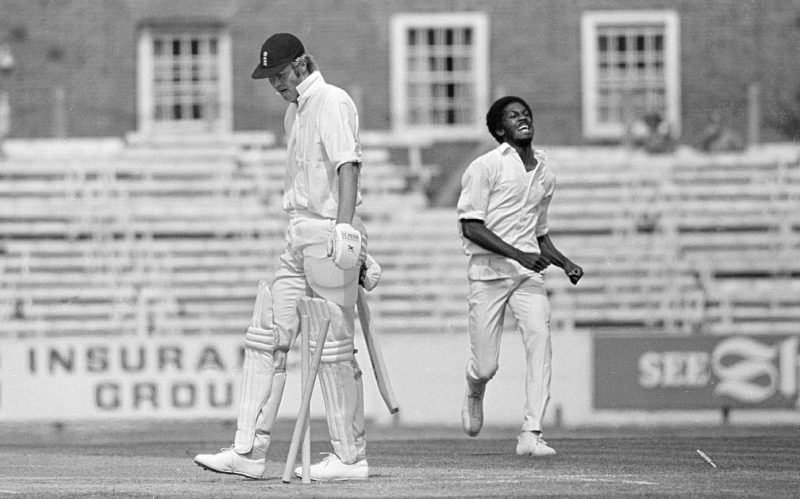 Tony Greig is cleaned up by Holding in the second innings

To put his achievement into context, poor Andy Roberts, a lethal quickie in his own right, toiled away for a return of just one wicket in 40 overs for 135 runs. Jim Laker’s 19 wickets at Old Trafford in 1956 against the Aussies may have been a bigger haul – but he got massive assistance from the turning pitch.

And so too did Australian Bob Massie when he took 16 for 137 in the Lord’s Test of 1973 where he cashed in on extraordinary atmospheric conditions to swing the ball like a boomerang. But Whispering Death had no help whatsoever from the flat track conditions at the Oval in 1976.

His feat is underlined by the fact that of his 14 wickets, no fewer than 11, including the last, were taken without any help from the fielders. The sound of shattering stumps had become a magnetic, absorbing ritual.

In fact as the days wore on we all commented on how utterly silent and tranquil it was when Holding was running in to bowl.

In the moment of victory Michael, who betrayed little emotion when he took a wicket, let his emotions slip briefly to seize a stump and sprint for the pavilion leaving all his team-mates behind.

As the match unfolded, members talked continually to each other and discussed the likelihood of bowling and batting records being broken. That is one of the great benefits of going to see a cricket match live rather than watching it on television – the incessant and informed chatter between the balls.

And even though England ended up being caned out of sight, there was not a hint of malice towards the Windies among the spectators. We all realised that we were witnessing an historic event and the creation of an icon – the one and only Michael Holding.

Related Story: Andy Roberts & Michael Holding: The greatest partnership, on and off the field

When I went this summer to see England against India, I watched some of it from the wonderful new Vauxhall stand and some from the pavilion. But as ever, during dull moments of play, my mind strayed back to those five wondrous days in August, 1976 when Whispering Death, who was just 22, first burst on to the scene.

There may have been greater fast bowlers in cricket history – not many I’d fancy – but I submit that none have ever produced a match-winning performance of such fiery yet elegant grace.

I cannot now recall who first coined the phrase Whispering Death but it is probably the most appropriate nickname ever given to an international sportsman.