Cricketing comebacks vary from ‘box office’ smash to forgettable flop. First published in the issue 2 of the Pinch Hitter, James Wallace lists his selection of the best and worst second comings.

Plunkett had his first trot out for England in the hazy days that followed the summer of 2005, called up to play in Pakistan as a replacement for the injured Simon Jones. It’s easy to forget this iteration of Plunkett, just 20 years old, a peacock-haired indie-landfill-lead-singer-lookalike, tearaway ‘smoggie’ from Middlesbrough who possessed no shortage of skiddy pace.

He showed early promise, particularly in the short stuff, picking up three wickets in a series decider against the Aussies, including bowling Adam Gilchrist with an absolute jaffa, but he struggled with his accuracy, eventually dropping out of the Test squad and enduring an underwhelming World Cup.

Seasons came and went for Durham but it seemed likely that Plunkett was destined to be a well-liked and respected county bowler who never quite capitalised on his early international promise until a move to Yorkshire in 2013 sparked his career back into life.

His reincarnation as Plunkett 2.0 – hench elder statesman of the England ODI side, all bristle, biceps and canny cutters – played a huge role in the World Cup win. England lost the three games he didn’t play in, and he snaffled the crucial wicket of Kane Williamson in the final. A remarkable second chapter, Plunkett had played against fellow finalist Ross Taylor 13 years earlier in the 2007 World Cup. This time around he was there at the very end to lift the trophy, a decade-and-a-half after it all began. ‘Pudsey’, a nation salutes you.

Sidebottom had a wicket-less Test debut at Lord’s in 2001, alongside Sky Sports’ own Ian Ward as debutants in a victory against Pakistan, and struck a curious figure to the naked eye, a left-armer with ‘Sideshow Bob’ hair and a Joe Pasquale voice, fourth seamer that day to the three stooges of Gough, Caddick and Cork.

He seemed destined to join his dad, Arnie, as a ‘one-cap wonder’, a county stalwart with a single anomalous Test, his international career gradually forgotten only to be rolled out sporadically as a teasing pub quiz question:
“Which ginger-trussed left-armer with a ‘Carry On’ name played a solitary Test for England, the same number as his old man?” 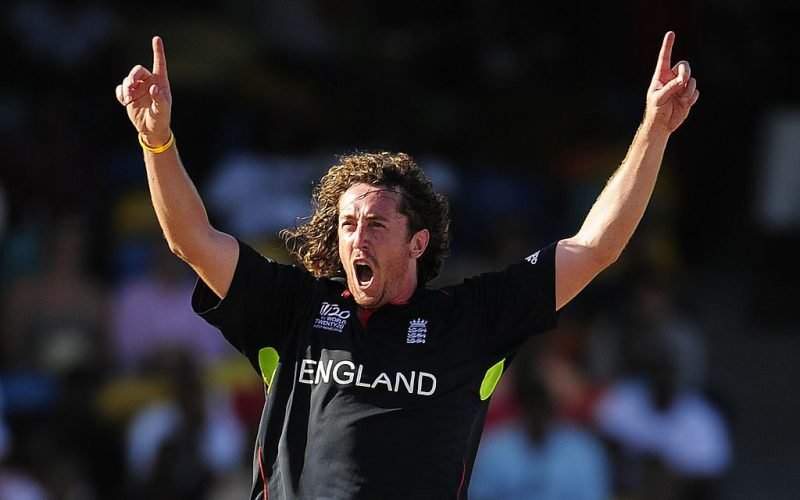 Sidebottom bagged 10 wickets at the ICC T20 World Cup 2010, which England went on to win defeating Australia in the final

So Sidebottom returned to the pastures, but that single taste of the big time wasn’t enough. And so, channelling another ‘Arnie’ in his wilderness years – this time the big lad from Austria, whom Clive James memorably described as a “brown condom full of walnuts” – back Sidebottom came, finally recalled to the Test side in 2008.

He didn’t need clothes, boots or a motorcycle, but just a new Duke ball, sullen Headingley skies and a brittle West Indies batting line-up, which he duly terminated. He finally bid ‘Hasta la vista’ to his playing days in 2017, with 79 Test wickets, a World T20 winners’ medal and no less than five County Championship titles to his name.

Johnson’s career is a tale of two songs. He first appeared for Australia in the wake of Glenn McGrath’s retirement and, perhaps waylaid by Dennis Lillee’s famous prediction that the young Johnson was a “once in a generation bowler”, struggled to make a lasting impact.

He had a tendency to implode and lose his action altogether. This would result in Johnson resembling a ruptured hose and the ball being sprayed all over the show. Following a wild 2009 Ashes and an erratic follow-up in 2010/11, Johnson looked to be a busted flush at Test level.

A broken toe forced him to take some time away from the game, allowing him space to get his mind and body in sync. He returned for the 2013/14 Ashes as a different beast. Johnson ripped through England time and again, his newly sprouted handlebar lip-luggage not the only thing that brought to mind the macho pace and aggression of his mentor, Lillee.

The Barmy Army fell silent, in terrified awe. The 5-0 drubbing was dubbed the ‘Pomnishambles’, with Mitch finishing with 37 English scalps at an average of 13 for the series. He later credited his rhythm to the song Let it go from Disney’s Frozen, which he used as a sort of malevolent mantra during his run-up. Chilling.

Wally was so good. Just take a look at his numbers, they’re enough to get any self-respecting statto clammy under the collar. Better than that, watch him play. Ogling the old boy biffing the net bowlers at Bristol of a morning is sure to put a spring in your government-mandated steps. However, the story of his ‘comeback’ is a sorry and saddening one, made all the more poignant by the fact it was probably partly inspired by Hammond having six years stolen from his career by the Second World War. 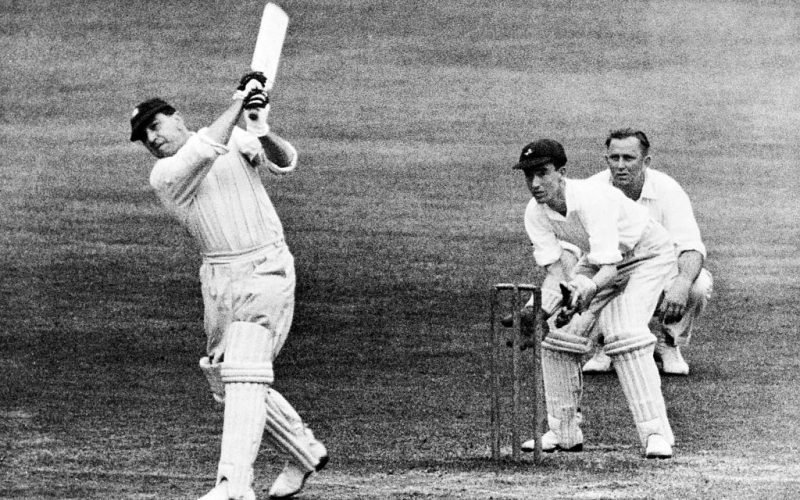 Wally Hammond is one of the only seven batsmen to aggregate over 50,000 runs in first-class cricket

Hammond begrudgingly hung up his spikes in 1947, afflicted by arthritis and suffering from problems in his personal life. Some sportsmen can’t resist the call for one last hurrah, to recall past glories or simply see if they’ve still got it, and Wally had lost it. Coaxed out of retirement in 1951 to play for his beloved Gloucestershire against local rivals Somerset, what he had gained was heft, and plenty of it.

The match was scheduled for a Bank Holiday Monday to maximise flagging ticket sales with the crowd-pleasing draw of Hammond’s return. They soon wished they hadn’t. A heaving crowd lurched from expectation to sorrow as it became clear that Hammond could barely lay a bat on even the tamest bowling. His torture lasted the best part of an hour before he was bowled for a painstaking 8, all made in singles. It was his last professional game.

‘Freddie’ was only 32 when he had to retire from all forms of the game. You sensed he still had more to give but his body simply wouldn’t let him, his knee in tatters after decades of mammoth spells and talismanic performances.

Not able to eschew the limelight for long, a stint in the celebrity jungle dropping wisecracks and chowing down on kangaroo offal led to him gracing panel shows and fronting his own documentaries. A newly svelte Flintoff then announced in 2012 that he was training to be a boxer. Sure enough, he defeated American slugger Richard Dawson in four rounds in what remains his only bout.

He then made a slightly strange comeback for Lancashire in 2014, a low-key first game in five years for his county in a T20 against Worcester at a not-that-bothered New Road, preceding a Finals Day appearance where Lancs eventually lost a close final.

Flintoff then turned out in a handful of games for Brisbane Heat in the Big Bash. In all, he didn’t disgrace himself, but it wasn’t quite the rousing return he or his fans wanted. After the unforgettable raiding of the Aussie ark in 2005 and one last time in 2009, his last crusade ended up being a bit of a dud.

Milburn lit up cricket with dashing strokeplay on the pitch and zeal for life off it. Nicknamed ‘Ollie’ after the similarly stocky funster Oliver Hardy, Milburn scored at a prolific rate – hundreds before lunch were a specialty. The Durham man’s ‘gin and cokes’ and effervescent good nature became the stuff of folklore, giving cricket some much needed pizazz in the mid-to-late Sixties when, in England, the game was more stale than ‘swinging’.

Milburn played numerous eye-catching innings for Northants, once making a century on a dog of a wicket in the wilds of Buxton where the nine other batters could only muster 13 runs between them. He was no yeoman, possessing the full range of technically correct strokes and was particularly devastating on the cut and pull. This led the England selectors to take notice, and he was picked to play against the West Indies in 1966. Yet despite scores of 94 and 126* he was dropped for the final Test at The Oval, his weight deemed to make him too cumbersome in the field.

He dazzled his way back into the England side, adorning the ’68 Ashes, and in what would prove to be his last Test innings he scored an astonishing 139 off 163 balls against Pakistan, at Karachi in 1969. But only a few months later he was involved in a car crash and lost the sight in his left eye, effectively depriving the game of one its most captivating sons. He made a doomed comeback in 1974; it was remarkable that he got anywhere near a batting crease, and his efforts for Northants merely served to highlight what the man and his public had lost that fateful day.

He died aged only 48. Life without cricket was a struggle, his tragically early death at odds with how he had breathed so much life into the game. At his funeral, Ian Botham helped carry his casket.