Paul Stirling’s Alan Shearer celebration, batting tips from Tim Murtagh, illness in the Afghanistan camp, and other nuggets from the sidelines of the Ireland camp.

Paul Stirling arrived with the Ireland team to the Rajiv Gandhi International Stadium, carrying his own Bluetooth speaker with some chill-hop music on. If he had it on – and I am guessing he did – all through the bus ride from the team hotel to the stadium, which is a 35km or so drive through traffic, I was hoping for everyone’s sake that he had accepted song requests from his teammates.

The players began warming up, and the commentators discussed the pitch, the weather, and the ifs and the what ifs. Among the commentary team was the senior O’Brien, Niall, who looked great in his shiny whites – erm, not the Test whites but a salwar kameez with a karakul hat. Way to show his neutrality!

Unfortunately for Ireland, they collapsed to 85-9. Then came ‘Lambeth Lara’ to the rescue. Tim Murtagh, the No.11, went on to make his first half-century in international cricket, scoring 54* from 75, and also became the first to hit a six – which later became two sixes – for his country in Test cricket.

His half-century along with George Dockrell’s 39 lifted them to a first innings score of 172, before Afghanistan finished the day on 90-2, with debutant James Cameron-Dow claiming both wickets.

Murtagh was kind enough to have a quick chat with the media at the end of the day, insisting he had batting tips to share with his team-mates. Skipper William Porterfield, who was filling ice in a bottle next to him, wasn’t going to let the attention get to his No.11’s head. A bit of banter between the two, and Porterfield went for Murtagh’s shorts. Thankfully, they didn’t come down.

Afghanistan dominated for the most part, posting 314 and extending their lead to 142. Debutant Dockrell took two wickets, leaving him nothing but delighted.

With three more days of play left, Ireland needed to just stick around and score runs steadily and cautiously, but they went to stumps at 22-1, losing Porterfield for a second-ball duck.

Murtagh, who had kept his room door open the previous night, was disappointed nobody came by for tips.

Lads, @tjmurtagh’s doors are still open just in case you need some batting tips ahead of Day 3! ??#AFGvIRE #BackingGreen☘️ pic.twitter.com/xDvg1AT9ey

St Patrick’s Day. Stuart Thompson was determined to bat through, while all Dockrell wanted to keep him going was a little cake. We’re not sure if he got one.

Play started with the strange dismissal of Stirling, who was given out lbw by the umpire when the replay showed there was an inside edge. Bummer! Andy Balbirnie and James McCollum built a partnership of 104 before Balbirnie fell 18 runs short of a hundred. Bummer 2.0! Another mini-collapse.

Rashid Khan, expected to be Ireland’s big threat, had been mostly quiet till then. An injury to the middle finger on his spinning hand had bothered him all Test. But he knew how much depended on him, and, as he admitted later, he “cannot make excuse with a finger injury”.

Even as he picked up his five-for, Ireland’s lower order averted total embarrassment in setting Afghanistan a target of 147. And Balbirnie shared some inside news.

Some inside news from @balbo90!

“Most of the batters have been hiding from @tjmurtagh!” ? pic.twitter.com/BcNzGwBfhx

Meanwhile, Mohammad Shahzad was dealing with a bad case of food poisoning. He’d been throwing up, but there was no keeping him from taking the field or coming out to bat. The entertainer tucked away his usual flamboyance, but despite his efforts, he was the first wicket to fall, late in the day.

Day 4 – May the road rise up to meet you

The equation was simple: Ireland needed nine wickets to win while Afghanistan needed 118 runs. The players warmed up with a bit of football and Stirling did a neat Alan Shearer impression, immediately wanting to know if the goal had been recorded.

They nearly had a chance to recreate that celebration on the field, but Thompson dropped an easy catch. Bummer 3.0!

The Afghanistan batsmen scored runs as if they had to catch a flight after lunch, and they finished their chase before that. History for Asghar Afghan and his men – their first-ever Test win!

"Take nothing away from Afghanistan they are the deserved winners and they played really well. It's been a long tour, but the lads have been very good," says skipper @purdy34. #AFGvIRE #BackingGreen☘️

The mood in the Ireland camp had changed. There was obviously no celebration, and they felt the defeat. They could have been on the winning side if they had batted with grit in the first innings.

There will be a time, a place, a setting when Ireland will win their first game in Test cricket. We’re no Paul the Octopus to make predictions, but Ireland do wear the ‘underdog’ tag well.

They will carry that into their next Test, against England at Lord’s – a venue that is a “home away from home” for a player like Murtagh.

"It wasn’t quite home, but they have made themselves at home here."@Vegansportlover on Afghanistan's association with Dehradun, which goes 200 years back, and way beyond cricket.https://t.co/j5rihf08AY

The victors, meanwhile, eschewed their usual exuberant celebrations to underline a newfound discipline. To even think of winning, with three of their top players suffering from either injury or illness – apart from Shahzad and Rashid, skipper Afghan had been wincing through a shoulder injury he picked up during the third ODI game – showed the kind of fight they fought. 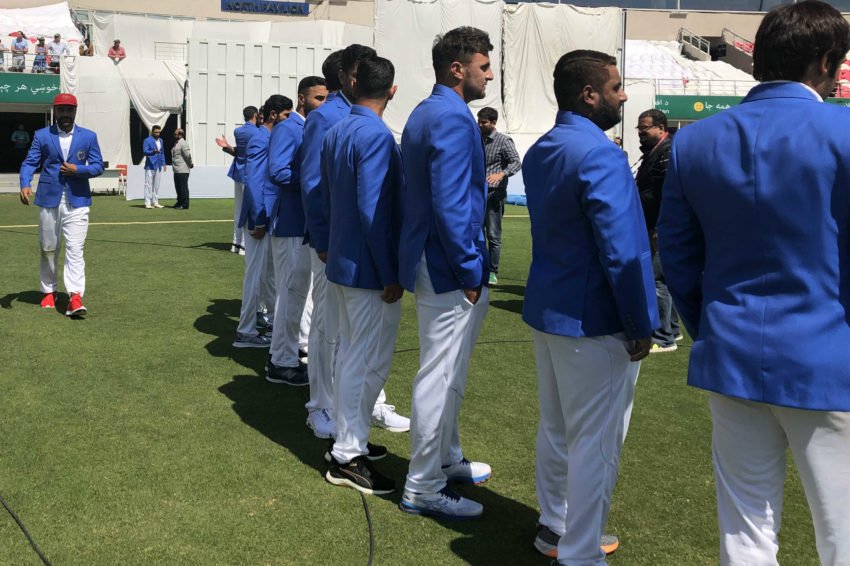 The team pulled-on their shiny blue blazers as they lined up for the post-match presentation. But with Afghanistan it can never be all straight-laced and formal: Rashid added a further dash of red to his outfit, matching his Test cap with hot-red shoes. Shahzad declined to do the ‘Champion’ dance, but ran around with the trophy on his head, nonetheless.

They all posed for the team photo, their index fingers raised in the sign of ‘one’. The first win in a Test, with a hope of someday topping the Test rankings chart, one victory at a time.