Michael Vaughan’s men looked certain to lift the Champions Trophy 2004 title at The Oval, when they had West Indies down and out during their chase in the final, until Ian Bradshaw and Courtney Browne thought otherwise.

Played out under gloomy September skies, the 2004 Champions Trophy had been a largely forgettable, rain-sodden affair until two unlikely lads from Barbados put on a grandstand finale in south London.

The final looked to be heading for a dreary end when Shivnarine Chanderpaul chipped a leading edge to Michael Vaughan with the West Indies needing a further 71 runs for victory and just two wickets intact. The ninth-wicket pair of Courtney Browne – a 34-year-old keeper born just down the road in Lambeth, boasting a career-best of 26 – and Ian Bradshaw – a 30-year-old seamer who hadn’t passed 12 in 15 previous ODIs – set about trying to make the best of a bad situation as Steve Harmison ramped up the pace in diminishing light.

Initially they clung on like limpets, but having survived the barrage their eyes started to adjust to the light – or what was left of it – and they grew in confidence, as Browne scythed a 96mph missile through backward point. When the umpires offered the batsmen the light with 35 more runs needed they turned it down, much to the delight of the home supporters, many of whom rose to applaud what they saw as the Windies’ sporting acceptance of their inevitable demise.

But Browne and Bradshaw were on a roll. England started to lose their cool, making sloppy errors in the field and offering up valuable extras as the West Indies chipped away at their target. Vaughan went for broke in search of a wicket, bowling out Gough, Flintoff and Harmison, but all to no avail. With two overs remaining, and 12 runs needed, he was forced to turn to Alex Wharf.

The pair seized the opportunity as the Glamorgan seamer lost his nerve, overstepping on his second delivery before Browne sliced a full ball for four down to third man. With seven balls remaining and four runs needed, Bradshaw finished the job in style, swatting the final ball of Wharf’s over through the covers to complete a comeback that not even the most one-eyed Windies fan saw coming. 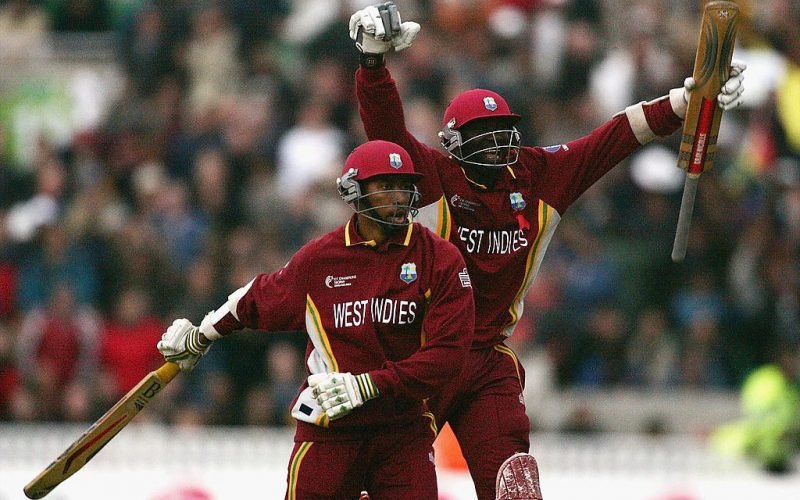 As the Caribbean support in the crowd went ballistic, Bradshaw gave a frenzied fist pump before unfurling a full-length running dive to greet his teammates as they sprinted on to the turf to greet their unlikely heroes. No one quite knew how, but the West Indies had just won a first ICC one-day tournament for 25 years.