From dog sticks to darkness – James Wallace wonders if all those weird practice methods make men perfect, as he pens down the best and worst of the lot in issue 29 of the Wisden Cricket Monthly.

A crescendo of horns. Mark Wood, decked out in dowdy grey hoody and matching joggers, house brick in each hand, jogs along a disused railway line and traces the River Wansbeck into the streets of Ashington. The camera lingers on him and a choir sings: “Trying hard now!” Mark Wood is bounding now, slowing his pace only slightly to catch an orange thrown to him by a kindly market trader, played by an exuberantly-paunched Stephen Harmison. “Gettin’ strong now!” Cut to Mark Wood with bandaged hands punching huge hunks of beef in an industrial freezer. It’s not clear why but it feels important. Finally, Mark Wood in a cavernous barn, wearing full kit, flaying cricket balls. Removing his helmet and flashing that mega-watt smile, he walks toward his wife, Sarah, and father, Derek, who are high-fiving each other behind the bowling machine. They all embrace. “Gonna fly now!” Fast-forward to Port Elizabeth, and a breakneck 42 featuring five towering sixes, before a repeat dose at Joburg. Woody IV: The Comeback − coming to a ground near you in 2020.

Anyone can be a net bowler now. The dog-stick revolution means any Mark, Paul or Graham can whang down unpredictable deliveries at great speed. Alastair Cook mentioned Gooch’s canine catapult in a heartfelt retirement statement, recalling that Gooch, “spent hour after hour throwing balls at me with his dog stick”. Kevin Pietersen, in one of the more enlightening passages from his book, wrote of his disdain for Gooch’s favoured training tool: “He calls it the dog stick – it’s a bit like one of those things people use to throw balls for their dogs”. Roy Walker would be proud, Kevin. 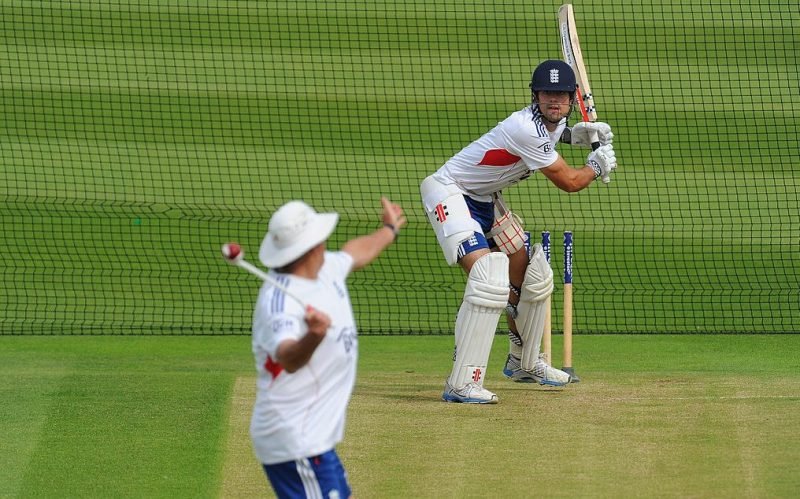 When Brian Lara first took up golf he thought it might impinge on his batting technique so he simply switched hands and became a very competent right-handed golfer. At Antigua in 1994, 320 not out overnight and with Sir Garfield Sobers’ Test record in his sights, he rose early to play a quick nine holes. At 11:47 am he crashed a Chris Lewis bouncer to the boundary, cue scenes of joyful chaos.

Attributed to Steve Waugh – somewhat surprisingly as he generally has the air of a bloke who would more readily choose a lava enema over an enforced male bonding session – the thinking here was that top-order batsmen would mentor their less able teammates for the good of the team. Waugh himself was tasked with honing the skills of Glenn McGrath, eventually telling him to try batting left-handed before throwing in the towel completely. The zenith of the ‘buddy’ system was surely Monty Panesar surviving 37 balls against Australia in the drawn Cardiff Test of 2009, which he credited to his batting pal Paul Collingwood. Although it should be said that Panesar ended his Test career with an average of 4.88.

Bradman became the best by practising with a stump and a golf ball. Denis Compton used to saunter out to bat with any old bit of wood – once scoring 158 with an antique bat he nabbed from the museum at Old Trafford after forgetting his kit for the umpteenth time. Compton was fond of saying, “If you can play, you can use the leg of a chair”. This unorthodox approach to preparation was echoed by his grandson, Nick, who claims to have endured net sessions in a darkened indoor school with the bowling machine set to 99mph. Seems a bit like the coach is pulling his leg; the cricketing equivalent of sending the work experience kid for ‘tartan paint’ or ‘spirit-level bubbles’.

We all see ourselves as potential five-a-side heroes, emperors of the astro-turf. The burning embarrassment of hoofing another one into the adjacent carpark matched only by the potent haze of Deep Heat. Thing is, most of us are nine-to-five dreamers who aren’t representing our country at cricket. Lads, leave the bruised shins to us mere mortals and drop the warm-up footy. The only thing ‘coming home’ recently was Rory Burns, on a flight, after damaging his ankle ligaments following an admittedly tidy finish. Imagine Jordan Henderson knocking Marcus Rashford out with a beamer before a World Cup qualifier in a pre-kick off net. Wouldn’t happen.

First published in issue 29 of the Wisden Cricket Monthly